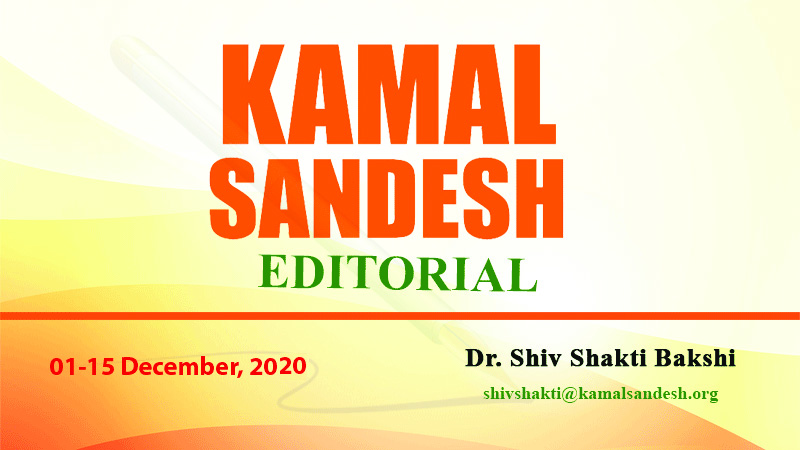 As Shri Nitish Kumar took oath as Chief Minister of Bihar for the seventh time, the NDA emerged even stronger showing its commitment to serve the people of the state. The BJP National President Shri JP Nadda had maintained right from the beginning that whatever be the numbers of seats won by BJP and JDU, Shri Nitish Kumar would be the Chief Minister of Bihar. While honouring the commitment, Shri Tarkishore Prasad and Smt. Renu Devi have also taken oath as Deputy Chief Ministers in the state showing that NDA is united, has emerged stronger and the alliance is further cemented by commitment to serve the people while paving the path for an ‘Aatmnirbhar Bihar’. It was the sense of responsibility, unflinching commitment towards the people and dedicated work to take the state forwards which resulted in continuous blessings by the people making NDA win elections again and again. The victory of NDA in Bihar is victory of the aspirations of the people.

While the people of Bihar have blessed NDA with victory, the RJD-Congress-Communist alliance was completely rejected. It is an irony that the opposition instead of accepting the defeat has resorted to dirty tricks by offering berths to NDA constituents in a bid to form government through back door. Not only this, the infightings in ‘Mahagathbandhan’ exacerbated with RJD blaming Congress for the defeat. In place of introspecting over the past misdeeds and framing policies and programmes which can represent the aspirations of the people, the opposition still prefers to cling to dynastic politics, casteism, appeasement, corruption and criminalization while relying on muscle power in politics. They not only lack vision but often take stands which are undemocratically anti-people and anti-development. The people have been punishing these parties for their failure to introspect, reform and reformulate their programmes and policies.

While ‘Mahagathbandhan’ faces a crisis in Bihar, the Congress is battered so badly that it now faces an existential crisis at national level. But it is highly unfortunate to note that in place of respecting the national mood, Congress is repeatedly indulging itself in self goals like intending to join Gupkar Alliance which supports restoration of Article 370 in Jammu & Kashmir. The Congress stand on almost all national issues has not only gone against the national sentiments but also shows how low it can stoop to serve its vested political interests. The recent revelations of names of important Congress leaders in Augusta Westland scam has reduced Congress to a bunch of middlemen and scamsters who see politics as business enterprise. In public perception, Congress has become a political party of undemocratic and power hungry dynasts and self-seeking politicians.

The people of India today have unflinching faith in the leadership of Prime Minister Shri Narendra Modi and the BJP. In the time of Covid-19 pandemic when even the most developed countries are adversely affected, India has not only created a robust health infrastructure amid the crisis but also ensured that millions of poor went to their bed with their stomachs full. The massive relief to poorest of the poor, women, senior citizens, divyangs, farmers, migrant labourers, small entrepreneurs, street vendors, MSMEs, farming sector and major reforms in every sector will be recorded in history as an example of how challenges can be converted into opportunities. The leadership of Prime Minister Shri Narendra Modi inspired a large number of people to serve the society and under the guidance of BJP National President Shri JP Nadda, millions of BJP karyakartas served the society chanting the mantra of ‘Seva Hi Sangathan’. While Bihar has blessed the efforts of BJP karyakartas and expressed its deep faith in the leadership of Prime Minister Shri Narendra Modi, entire country has also blessed BJP with victory in the by-elections held in various states. The nation is marching forward to realize the dreams of an ‘Aatmnirbhar Bharat’.