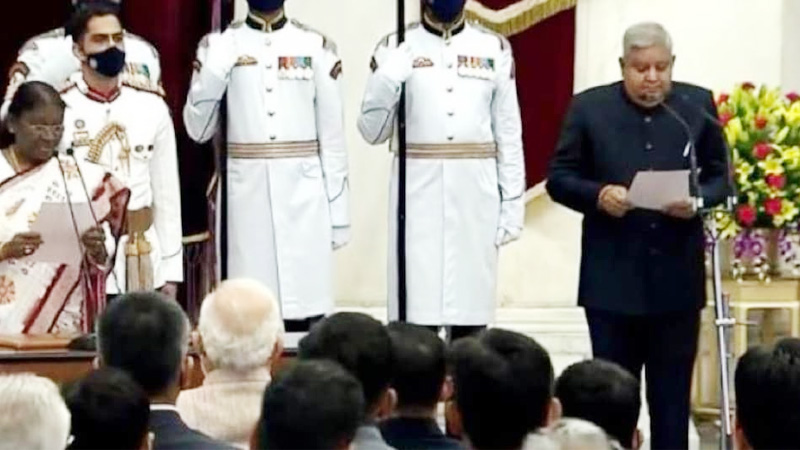 Shri Jagdeep Dhankhar was elected as the 14th Vice President of India on 06 August 2022 as he defeated joint Opposition candidate Mrs. Margaret Alva. Shri Dhankhar, a former governor of West Bengal, secured 528 votes while Mrs. Alva got 182. While the Electoral College comprises 788 members, due to eight vacancies in Rajya Sabha, the present strength is 780. The Trinamool Congress had abstained from voting.
Shri Jagdeep Dhankhar, 71, will succeed Shri M Venkaiah Naidu as Vice President of India whose tenure ends on August 10. He will take oath on August 11. After the results were announced, celebrations had started outside the residence of Parliamentary Affairs Minister Shri Pralhad Joshi where Shri Dhankhar was present. Joyous scenes were also reported from Rajasthan’s Jhunjhunu, the hometown of Shri Dhankhar.

Shri Dhankhar, a lawyer by training who hails from Rajasthan, began his political career when he was elected to the Lok Sabha from Jhunjhunu in 1989. He was a Union deputy minister briefly from April-November 1990. He was in-charge of Parliamentary Affairs. He then shifted to state politics and won his next election for the Rajasthan Assembly. He represented Kishangarh seat from 1993 to 1998. After that, he practiced as a lawyer in the Supreme Court until he was appointed the Governor of West Bengal in July 2019.

Hon’ble President Smt. Droupadi Murmu in her message said, “Congratulations to Jagdeep Dhankhar on being elected the Vice President of India. The nation would benefit from his long and rich experience in public life. My best wishes for a productive and successful tenure,” she said.

Prime Minister Shri Narendra Modi in his message said, “At a time when India is marking ‘Azadi Ka Amrit Mahotsav’, we are proud to have a Kisan Putra as Vice-President who has excellent legal knowledge and intellectual prowess… I am confident he will be an outstanding Vice-President. He had received resounding support across party lines. Our nation will gain tremendously from his intellect and wisdom.”

Union Home Minister Shri Amit Shah congratulated Shri Dhankar and said he would prove to be a superb Constitutional protector. “I have no doubt that Dhankhar ji would prove to be an excellent steward of the Constitution in his roles as Vice President and chairman of the Rajya Sabha. My congratulations. I also want to thank the NDA allies, other parties, and leaders for supporting Dhankhar Ji under Shri Modi ji’s leadership”. 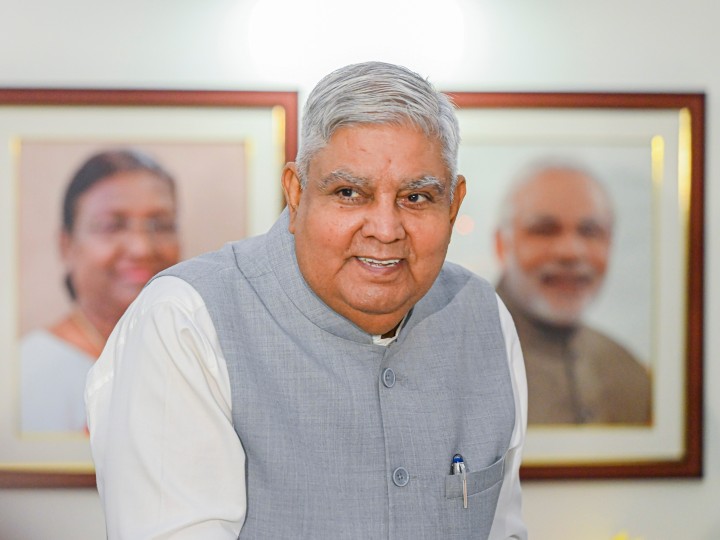 1951- Shri Jagdeep Dhankhar was born on 18 May, 1951 to Shri Gokal Chand and Smt. Kesari Devi in Kithana, a small village in Jhunjhunu in the State of Rajasthan. He completed his school education from Sainik School, Chittorgarh and then graduated in B.Sc and LLB from the University of Rajasthan, Jaipur.

1989- He has been a member of Janata Dal and Congress party in the past and was a MP of Janata Dal representing Jhunjhunu in Rajasthan during 1989–91 in the 9th Lok Sabha.

2016- He headed the BJP’s Law and Legal Affairs department.

2022- He resigned as Governor on 17 July, 2022 after being nominated as the vice-presidential candidate of the BJP led NDA.