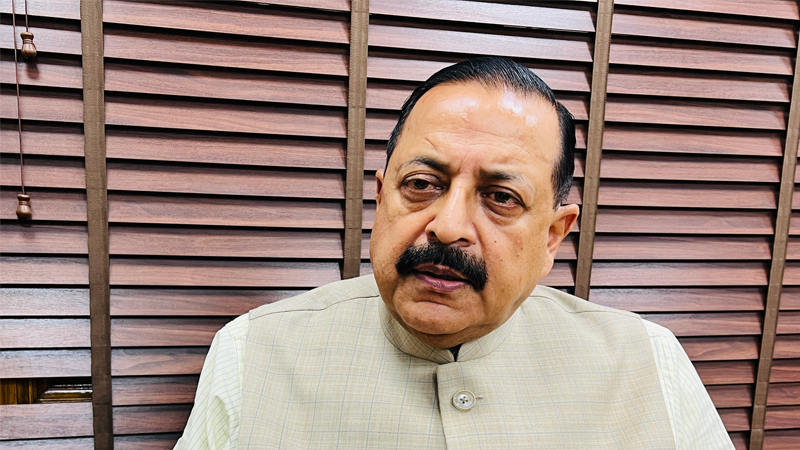 Taking a review meeting of the campaign, Dr Jitendra Singh also noted with satisfaction that so far more than 5200 volunteers from 24 States have already registered for the 75-day long campaign to raise awareness about “Swachh Sagar, Surakshit Sagar”, which will culminate on “International Coastal Clean-up Day” on 17th September 2022.

The Minister directed the officials of the Ministry of Earth Sciences to rope in NGOs, citizen groups, children and youth forums, corporates, non-profit organisations, consular staff as well as the Municipal Corporations of the Coastal States to convert it into a Jan Andolan.

Dr Jitendra Singh reiterated that Prime Minister Narendra Modi has taken a lead in the cleanliness campaign and has motivated the entire nation to keep the 7500 Kilometres long coastal line of India clean, safe and healthy for mankind.

Secretary, MoES, Dr M. Ravichandra informed Dr Jitendra Singh that coastal clean-up campaign were carried out at Digha and Haldiya in West Bengal, Bhawanipatna in Odisha Paschim, Thiruvananthapuram and Manjeshwar in Kasaragod district of Kerala, AsmawatiGhat in Porbandar and Gir, Somnath in Gujarat, Mangalore, Udupi in Karnataka and Chatham for Shore Road in Andaman and Nicobar Islands. He said that apart from removal of garbage from the sea coasta, activities like campaign pledge, NukkadNatak, Cycle Rally for Plastic se Azadi, Beach cleaning and Plantation, Sensitization of local communities about the coastal clean-up campaign were carried out in the last 20 days.

Dr Jitendra Singh sought active cooperation of members of civil society to achieve the target to remove 1,500 tonnes of garbage, mainly single use plastic from the sea coasts on “International Coastal Clean-up Day” on 17th September 2022, which incidentally is also birthday of Prime Minister Narendra Modi celebrated as “Sewa Divas” in the country. He called upon all to join the massive clean-up drive on 17th September to be carried out at 75 beaches across the country with 75 volunteers for every kilometre of the coastline. He also added that this year’s event also coincides with the celebrations of Azadi Ka Amrit Mahotsav in the 75th year of the country’s independence.

On 22nd July, Dr Jitendra Singh had convened a meeting of Union Ministers and Members of Parliament from coastal states of the country and sought their suggestions and support to make it a mass campaign. Union Ministers Bhupender Yadav, Minister of Environment, Forest and Climate Change, Gajendra Singh Shekhawat, Jal Shakti Minister, Mansukh Mandaviya, Minister of Health and Family Welfare, ParshottamRupala, Minister of Fisheries, Animal Husbandry and Dairying, V Muraleedharan, Minister of State for External Affairs, L. MuruganMoS attended meeting along with MPs from large number of coastal States.

The Ministers and the MPs pledged full support to the first-of-its-kind and longest running coastal clean-up campaign in the world and they also advised the Ministry of Earth Sciences to undertake a cycle rally, students rally by involving local NGOs.

It may also be recalled that on 23rd July, Indian Merchants’ Chamber (IMC) President Anant Singhania, who is also CEO J. K. Enterprises today met Dr Jitendra Singh and extended support for Mumbai sea beach cleaning as a part of the 75-day Coastal Clean-Up campaign initiated by the Ministry of Earth Sciences. Mr Singhania, who was accompanied by Managing Committee Members of the IMC, said that they not only pledged to join the campaign but also to mobilise their resources for the rejuvenation and beautification of “Queen Necklace”, which is the popular name by which the Marine Drive Beach is known.

Dr Jitendra Singh said, this is a mass campaign and sought everybody’s view as to how best to further strengthen the campaign which has already caught the imagination of the masses and the nation. He said, the Ministry of Earth Sciences is spearheading it but at the same time seeking a “whole of government” approach.