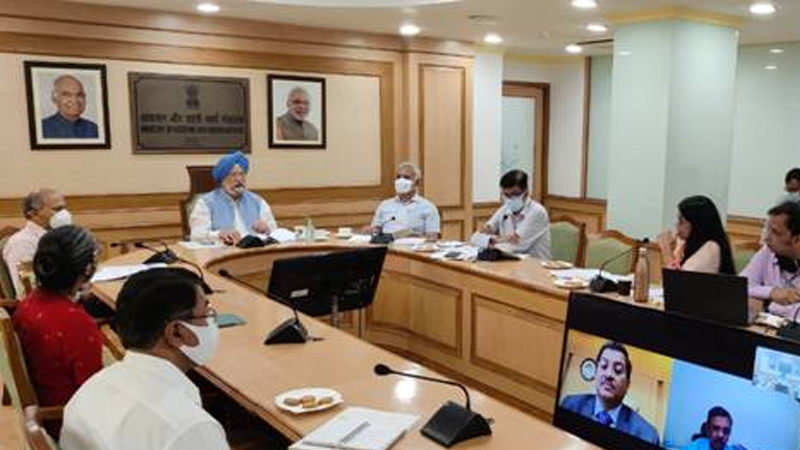 Minister of Housing and Urban Affairs & Petroleum and Natural Gas Shri Hardeep Singh Puri has called for promoting new and innovative low-carbon technologies that ensure housing for all, service delivery for all, better mobility for all, and place people at the forefront of sustainable urban development. He was addressing an event to mark the UN World Habitat Day 2021 today, with the theme of “Accelerating Urban Action for a Carbon-free World”.  Shri Durga Shanker Mishra, Secretary, MoHUA, Shri Surendra Kumar Bagde, Additional Secretary, MoHUA, senior officials from UN Agencies, States and the Ministry attended the event.

Lauding the concerted and integrated efforts of the Modi Government in combating climate change and laying the foundations for long-term economic growth, the Minister said that the sheer magnitude of the urban transformation that is taking place today, and the way this Government has interwoven climate action with such large-scale interventions, speaks of our commitment.

Shri Puri said that today’s theme “Accelerating Urban Action for a Carbon-free World” is not only appropriate but also very relevant from India’s context. The increasing global urban footprint makes more energy demands in cities which are already responsible for 78 percent of global energy consumption and 70 percent of Greenhouse Gas (GHG) emissions. The Minister said that the climate change makes human settlements vulnerable, especially the marginalised and urban poor, who are exposed to extreme weather events. India was the seventh most-affected country by climate change in 2019, with most of the impact being felt by its cities.

Speaking on the economic and environmental imperatives for Indian cities, Shri Puri said that India’s per capita emission of greenhouses gases is quite low as compared to other developed countries. India’s cumulative CO2 emissions from 1870–2017 is very less- it is only 3%, as compared to the 25% of USA, 22% of the EU and UK, and 13% of China, the Minister said.

The Minister said that India aims to reach the kind of economic growth that the advanced economies have reached in the past through their heavy industrialisation patterns but India may not necessarily follow that path of development as we are aware of the environmental cost. India recognises the importance of its cities in the country’s transformation as India’s urban areas are expected to contribute to as much as 70 percent of the national GDP by 2030. We have to achieve both our economic aspirations and realise our environmental responsibilities. There can be no doubt that planning for low-carbon cities will be necessary to achieve the SDG goals in India, particularly Goal 11 and Goal 13. If SDG succeed it will be because India will succeed, he added. Global targets are not likely to be met without India’s contributions.

On the Indian Urban Mission’s contribution to climate action, Shri Hardeep Puri said that the urban Missions like the Swachh Bharat Mission, Pradhan Mantri Awas Yojana, Smart Cities Mission, Urban Transport, and AMRUT launched by the Modi Government, have contributed immensely to reducing GHG emissions. Not only were these Missions part of the most comprehensive urbanisation programmes, they are also important components of our response to climate change.

On the use of sustainable and energy-efficient methods in building houses under the Pradhan Mantri Awas Yojana (PMAY), he said that certified green buildings can deliver energy savings between 20-30 percent and water savings of up to 30-50 percent. More than 16 lakh houses being built under the Mission today are utilising green technologies and this will help in mitigating around 12 million tonnes CO2 equivalent of GHG emissions by 2022 under the PMAY Mission. PMAY prioritised the promotion of low-carbon building technologies through the Global Housing Technology Challenge, wherein six Light House Projects (LHP) consisting of about 1,000 houses each are being constructed.

Shri Puri said that India stands out in the comity of nations, as it is about to reach the target of 100 crore vaccinations shortly. During Covid-19, we were able to reach to lakhs of street vendors through SVanidhi scheme. The vision of Mahatma Gandhi to bring out cleanliness in the country, has culminated now, with the Swacch Bharat Mission-Urban making all the cities ODF. The second phase of SBM will make the cities garbage free. The Solid waste processing has already gone up to almost 70% and will achieve 100% through the SBM-2.0.

On Urban transport system, the Minister said that we believe in moving people around but not cars and for that we are the expanding the robust public transport system such as Metro trains. Currently, 721 km of metro line are operational in 18 cities and a network of 1,058 km of metro network is under construction in 27 cities across the country, thereby reducing emissions concerns, he added.

Shri Durga Shanker Mishra, Secretary, MoHUA in his welcome address said that urban centres are critical to delivering or creating a climate safe world. Cities are more dependent on energy than rural areas and have considerable ecological footprints. He said that the accelerated urbanization catapults demands for mass transportation, commercial and industrial activities and exerts undue pressure on vacant urban land.

Shri Mishra said that Indian cities in the recent years, recognising the challenges of climate change, are moving toward walking, cycling, public transport, and shorter commutes. He said that the country is committed to the COP-21 commitments and making efforts in this direction- by increasing the share of renewable energy, improving energy efficiency, using local materials for construction, adopting the best technologies, and adopting climate resilient & sustainable practices.

On the occasion of World Habitat Day 2021, several e-Publications of the organisations under MoHUA viz HUDCO, BMTPC and NBCC were also released.