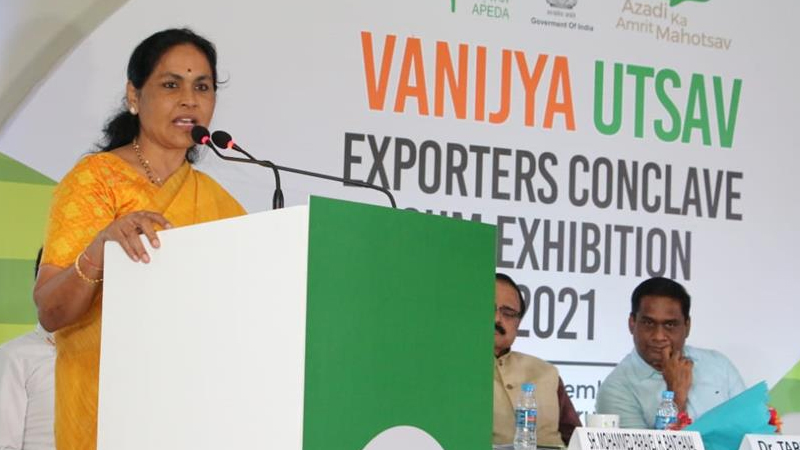 If we want to double the income of our farmers, we need to focus on enhancing the agri exports and our agri produce to be made chemical free, said Union Minister of State for Agriculture and Farmer Welfare Ms. Shobha Karandlaje.

While participating in the event, Vanijya Utsav, organized by APEDA- at Bengaluru today morning Minister said we have become self-reliant in all most all sectors except edible Oils. Now it is time for us to grow Oil Palm and set up oil processing Units to achieve Aatma Nirbharata in the oil palm sector. India’s agri future lies in exports she said.

India last year has produced 305 million MT of food grains and 326 Million MT of Fruits and vegetables. Amidst of COVID Pandemic India has produced record quantity of agricultural produce Minister said. But compared to other states Karnataka is lagging behind in exports. We are producing large quantity of food grains, fruits and vegetables which has demand in other countries and based on the demand it can be exported. But we need to focus on the quality of the produce as well as it should be chemical free.  As there is demand for agri produce we need to have proper Agri infrastructure to maintain the quality. Central Government has sanctioned funds for agri infra structure which has to be utilized properly.  Karnataka is blessed with varied agro climatic zones and we have to exploit this varied agro climatic zones togrow all variety of agri products. Also there is need for enhancing our R&D departments to get the good quality of agri produce which is suitable for exporting.

Dr. Rajkumar Khatri, Additional Chief Secretary,to Govt, Dept of Agriculture  in his Key note address said Industry dept is the face of Economy. Karnataka has large potential in agri  exports  and it has to be utilized.

M. Angamuthu, Chairman, APEDA  said as part of Azadi ka Amrit Mahotsav APEDA is organizing programs across the country. Vanijya Utsav held in Bengaluru is one among such programs. Karnataka and Bengaluru are example settlers in the field of Agriculture and horticulture he said.

Around 25 stalls of various agencies/ stakeholders were setup as part of the Exporters Conclave. Honorable Minister visited the stalls and appreciated the efforts of the organisers.