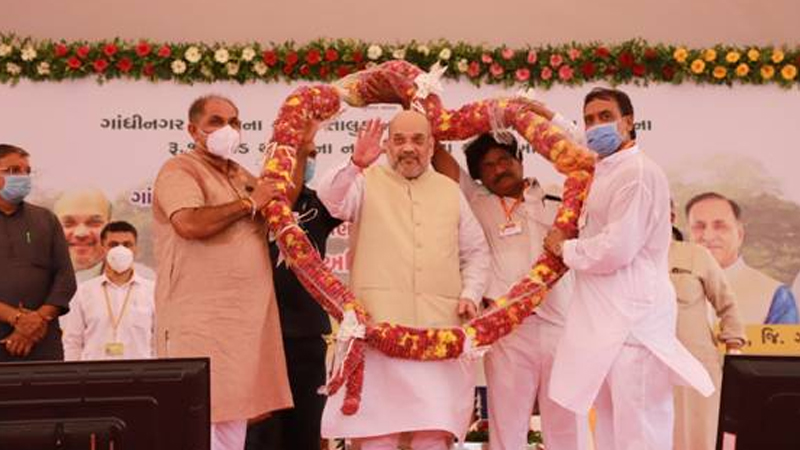 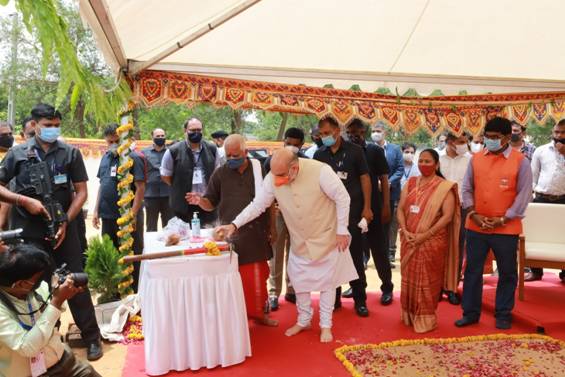 The Union Home Minister inaugurated development works worth Rs 25 crore in Nardipur village of Gandhinagar Lok Sabha constituency and also inaugurated the newly constructed Shardamani Community Center by Swaminarayan Mandir, Adalaj. I have come to the village where people have made such a system that no one should go to bed hungry. Such arrangements have been made that not only people but also no living being goes to bed hungry. He said that if anyone wants to know our culture, rites and traditions, then he has to come to Nardipur. Shri Amit Shah also said Nardipur means more to him as he spent his childhood and underwent his education till SSC in Mansa. Shri Amit Shah said he will continue to visit Nardipur and meet the people, for development work of Nardipur, whether it be the dispensary, modernization of the school, the children’s park or development of the pond.

Shri Amit Shah said that there is a plan to bring development to every village, with a population of more than 3,000, in Gandhinagar Lok Sabha constituency by 2024. It is our endeavour that not a single person in the entire constituency should be deprived of the benefits of any scheme launched by the Prime Minister Shri Narendra Modi, Chief Minister Shri Vijay Rupani and Deputy Chief Minister Shri Nitin Patel. The Union Home Minister said not a single house lacks a toilet, cooking gas, piped water and electricity. He said that we have seen a very difficult situation during the COVID-19 pandemic. In the second wave, the COVID-19 virus spread very rapidly, due to which it went out of control, but the Prime Minister Shri Narendra Modi tried to create such a system that, in just six to seven days, ten times oxygen supplies were despatched to villages and cities. Although we lost many people, Shri Amit Shah said let us now take a pledge that not a single person dies due to COVID-19 in Nardipur and in the whole of Gandhinagar Lok Sabha constituency. He said the Prime Minister has made arrangements for free vaccination of people above the age of 18 years and we must ensure vaccination.

The Union Home Minister said that a message should be conveyed to those who possess Red coloured ration cards in the entire area, that the Prime Minister has arranged for their families to get five kilogrammes food grains per person per month till Diwali. Shri Narendra Modi’s government has made this arrangement for distribution of free food grains to 80 crore people of the country, this message should reach every person and youth in villages should get together to make this campaign successful. 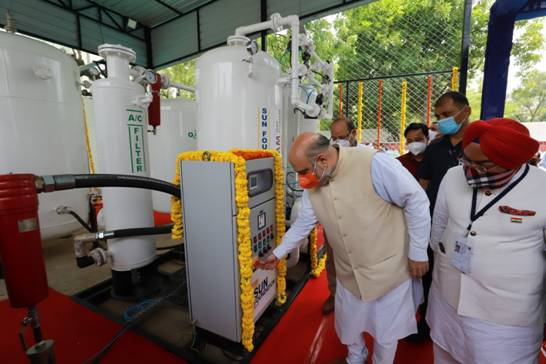 Home Minister Shri Amit Shah inaugurated an oxygen plant constructed by Sun Foundation at Civil Hospital, Gandhinagar. On this occasion, Shri Amit Shah said that this effort of Sun Foundation will give more strength in the battle against COVID-19 in Gujarat and the people of the region will be benefited for a long time. 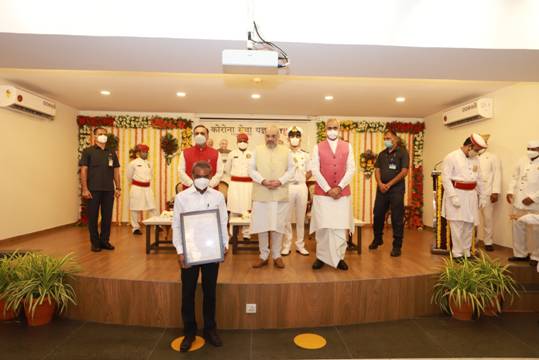 Home Minister Shri Amit Shah handed over citations at Raj Bhavan to dignitaries who made a special contribution in the battle against COVID-19. On this occasion, Shri Amit Shah said that under the leadership of Prime Minister Shri Narendra Modi, the country has unitedly battled the COVID-19 virus, and everyone has made an important contribution in this battle. Prime Minister Narendra Modi has called on all Raj Bhavans to create public awareness during the COVID-19 pandemic and to provide necessary help to people affected by it, and in this direction Gujarat Raj Bhavan has started this drive of providing selfless service in which many people contributed and relief reached the people. Shri Amit Shah thanked everyone for the battle they have fought against COVID-19, under the leadership of Modi ji.