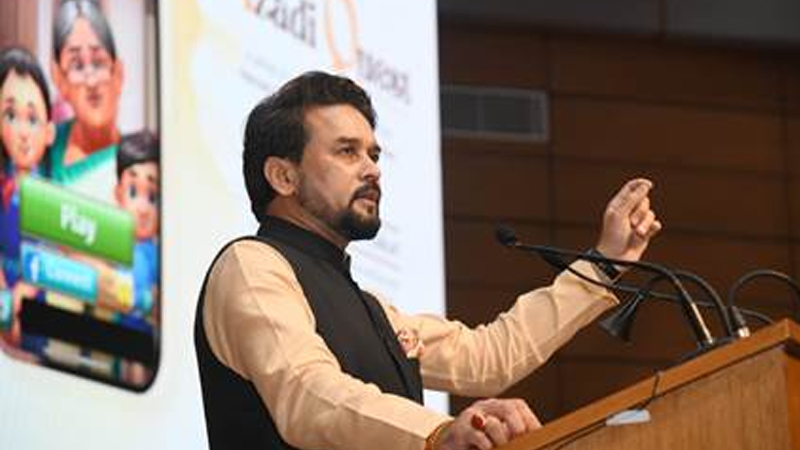 As part of the celebration of Azadi Ka Amrit Mahotsav and to bring to forth the story of Indian freedom struggle, Union Minister of Information and Broadcasting, Shri Anurag Singh Thakur today launched ‘Azadi Quest’, a series of online educational mobile games developed in collaboration with Zynga India. Also present at the occasion were Secretary, Ministry of Information and Broadcasting, Shri Apurva Chandra, and Country Head of Zynga India, Shri Kishore Kichli. Speaking on the occasion, Shri Anurag Thakur said that this was another in a series of efforts by the Government to acknowledge the contribution, of our freedom fighters and unsung heroes, to the freedom struggle.

“These games are an effort to tap into the huge market of online gamers and to educate them through games. Various arms of Government of India have collected information about unsung freedom fighters from the corners of the country. Azadi Quest is an effort to make this learning of this knowledge engaging and interactive”, the Minister elaborated. Shri Thakur expressed confidence that people of all age groups will be hooked on to these games and they will become household favourites quickly. 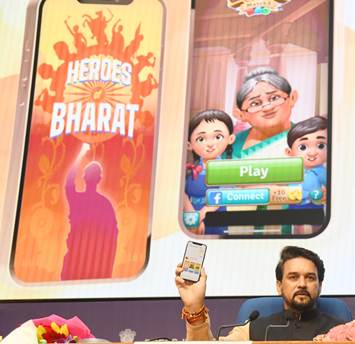 Speaking on the rising AVGC sector in India Shri Thakur said that it has been a continuous effort of Ministry of Information and Broadcasting to nurture the AVGC sector in India. In the past few years India has risen to stand among the top 5 countries in the gaming sector. The gaming sector has grown by 28% in 2021 alone. The number of online gamers has risen by 8 percent from 2020 to 2021 and by 2023 the number of such gamers is expected to reach 45 crores, the Minister added.

He further stated that these apps will bolster the capabilities of our AVGC sector and at the same time take our glorious history to the corners of the world. The information in these apps has been curated by Publications Division and Indian Council of Historical Research and will become an easily accessible treasure-trove of authentic information on our freedom struggle, he said.

The Minister acknowledged the strenuous efforts of Zynga India that have gone into creation of these apps. The Minister exhorted people of all age groups to download these apps and said this app will become an important educative tool to learn about our freedom struggle. The app will simultaneously entertain, engage and educate the users.

Speaking on the occasion, Shri Kishore Kichli, Country Head of Zynga India, said that “the path to independence commemorates a transformative milestone in India’s history and we are proud to be a part of this important national effort to honor India’s past. Our mission at Zynga is to connect people through games. This initiative is designed to engage players of all ages while harnessing the power of interactive entertainment as a teaching experience about this important era.”

The one of its kind initiative is inspired from Hon’ble PM’s call to the stakeholders of Gaming and Toy industries to develop games and toys that showcase the stories and milestones of India’s freedom struggle, and the valor of the great freedom fighters in order to engage, entertain and educate the people. The first two games in the series ‘Azadi Quest’ tell the story of India’s freedom struggle, highlighting key milestones and heroes, interwoven with fun game play. The games’ content is simple yet comprehensive, having been specially curated  by the Publications Division and vetted by experts of the Indian Council of Historical Research.

The Publications Division today signed an MoU with Zynga India to develop a series of games under the ongoing Azadi Ka Amrit Mahotsav. The Azadi Quest games are available for android and iOS devices in English and Hindi for the people of India and will be available worldwide from September 2022. The online gaming company Zynga India was established in 2010 in Bengaluru and has developed some of the most popular game franchises across mobile and web. 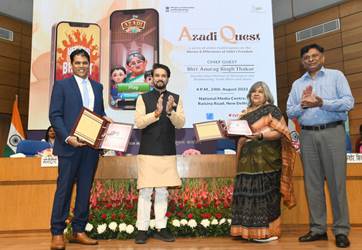 The unique game series, based on the concept of ‘Gamification of Education’ will revolutionize the education sector in the country. Game-based learning provides an equitable and lifelong education by expanding the learning process beyond the classroom and age. Azadi Quest series will impart the knowledge of India’s freedom struggle and the legends of country’s great freedom fighters, thereby inducing upon the players, a feeling of pride and a sense of duty and will be instrumental in removing the sense of colonial mindset as also emphasized upon by Hon’ble PM in his 76th Independence day speech as ‘Panch Pran of Amrit Kaal’.

First game in the series is Azadi Quest: Match 3 Puzzle, a simple and easy to play casual game presenting the players with the colorful journey of India’s independence from 1857 to 1947. As players progress through the gameplay, spread across 495 levels they can collect 75 trivia cards, each showcasing key moments in history, compete on leaderboards, and share in-game rewards and progress on social media. On the other hand, Azadi Quest: Heroes of Bharat  is designed as a quiz game to test the knowledge of the players about the heroes of India’s independence through 750 questions spread across 75 levels and also tell them about the lesser known heroes through 75 ‘Azadi Veer’ cards which can be shared across social media platforms.

The year-long partnership between the Publications division and Zynga India will deliver more such games and will also expand the existing games in terms of content and features with a vision to educate about the different aspects of India’s freedom struggle and inculcate a feeling of patriotism among the people especially students and youth. The games will also provide the players with exciting rewards every month including a certificate to those who complete the Azadi Quest.