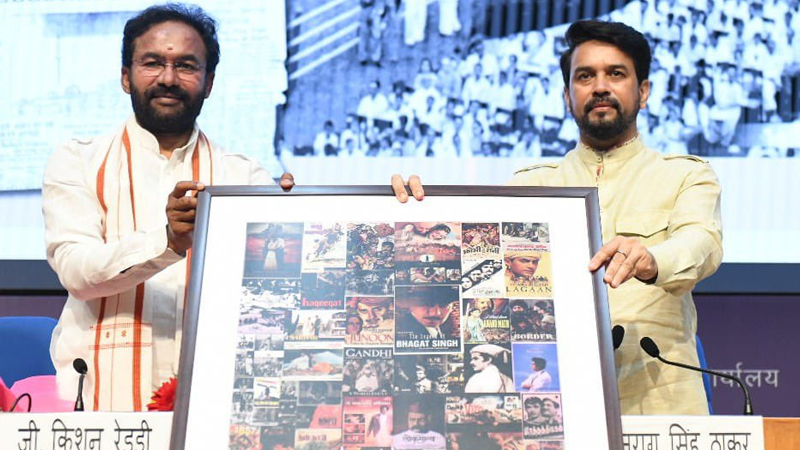 The event was organized as part of ‘Iconic Week’ being celebrated by Ministry of I&B along with various media units to celebrate Azadi Ka Amrit Mahotsav with the objective to showcase the journey of New India and celebrate the contribution of freedom fighters including the ‘Unsung Heroes’ of the freedom struggle through massive outreach activities.

Speaking at the event, Shri Anurag Thakur said that the purpose of the e-photo exhibition is to inform people on the making of the Constitution. The exhibition, a step in the direction of Jan-bhagidari, will not only encourage the youth of the country to learn about the Constitution but also educate them on their rights as well as enlighten them on the spirit of their duties towards the nation.

Shri Thakur announced that very soon the Government will run a ‘Know Your Constitution’ programme to encourage the youth to partner in the efforts to propagate the founding principles of India’s Constitution.

The Minister further said “We have released this compilation in digital format keeping in line with our transformative digital revolution. The book will be released in eleven Indian languages along with Hindi and English. This unique collection will celebrate the various milestones of our journey to independence”.  The virtual exhibition has a collection of videos and speeches along with an interactive quiz with a provision for e-certificate.

Speaking about the virtual poster exhibition the Minister said “Chitranjali@75 represents 75 years of Indian cinema and I am sure it’s going to evoke sacred memories of our freedom fighters, our social reformers and the valour of our soldiers. We have tried to include 75 such iconic films in our poster exhibition”. The Minister said that in the future, the Ministry will make efforts to take not just the posters, but these films also, to the people of the country.

Union Minister Shri G. Kishan Reddy thanked the Ministry of I&B for organizing such an elaborate event to celebrate Azadi ka Amrit Mahotsav. He said “It is the vision of our Prime Minister that Amrit Mahotsav should not be a Government event but an event of the people, the major thread of which is Jan-Bhagidari”. The Minister highlighted that through these events the Prime Minister wishes to inspire the youth to imagine a strong, powerful and confident India In 2047 when we celebrate hundred years of independence.

Shri Reddy said “Chitranjali@75 will remind people of the sacrifices made by our freedom fighters. This is an opportunity to look at our films as a part of our cultural heritage. Indian films have a unique opportunity to further India’s soft power. I am sure the photo and poster exhibition will inspire and energize the youth of the country”.

Shri Apurva Chandra, Secretary, Ministry of I&B said that the event was an effort in the direction of taking our historical and cultural heritage to the youth of the country.

Shri Thakur along with Shri Reddy, Dr. L. Murugan, Shri Arjun Ram Meghwal and Smt. Meenakshi Lekhi also unveiled a collage of images from the exhibitions on the occasion.

A panorama of visual documentation, this virtual exhibition traces the nation’s journey by showcasing the Indian cinema glorifying the bravery and sacrifice of the freedom fighters and soldiers, films that reflected the undercurrents of the society and led to various reforms, and films which immortalised the heroes in uniforms – the armed forces.

‘Chitranjali @ 75’, presents different moods of patriotism through 75 film posters and photographs from different language cinemas. The exhibition is divided into three segments: ‘Cinema of Social Reform’, ‘Freedom Struggle through the lens of Cinema’ and ‘Saluting the Brave Soldiers’.

Beginning with the silent film Bhakt Vidur (1921) up to the recent Telugu film inspired by the life of freedom fighter Uyyalawada Narasimha Reddy, Sye Raa Narasimha Reddy (2019), these 75 images include biopics on prominent freedom fighters as well as the films in various languages depicting the spirit of India’s freedom struggle, triumph over social evils and valour of heroes who are safeguarding our borders.

The exhibition has been made user friendly with features of sharing and downloading options.

About Making of the Constitution :

As part of ‘Azaadi ka Amrit Mahotsav’, on the occasion of 75 years of India’s independence, Ministry of I&B is launching a series of e-books, for an entire year, on various aspects of the freedom struggle. First in this series is ‘Making of the Constitution’. This will be followed by Integration of the Country, Women in Freedom Movement, Tribal Movements, Revolutionary/Gandhian Movements etc.

The e-book also has an additional interactive/engaging Quiz comprising a set of 10 questions to enhance engagement of the readers and ensure ‘Janbhagidari’ of the citizens.

This e-book will be available in Hindi & English and 11 other languages (Odiya, Gujarati, Marathi, Assamese, Telugu, Kannada, Tamil, Malayalam, Punjabi, Bengali, Urdu). The links will be available to local universities, colleges, schools by Regional PIB/ROB offices besides promoting them on their respective social media platforms.