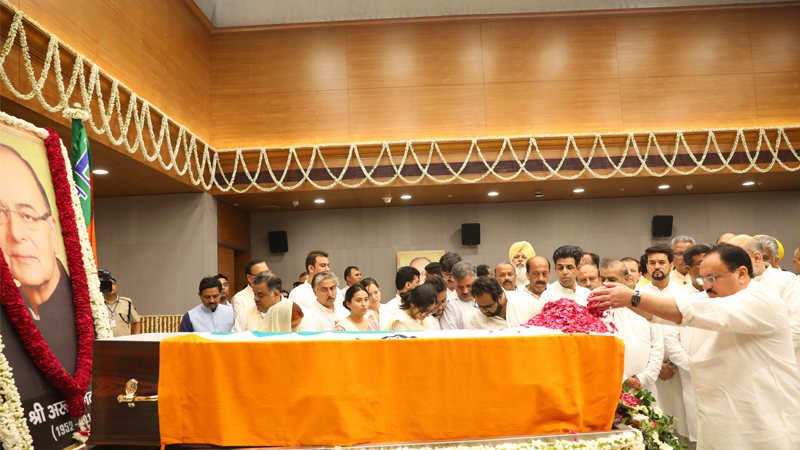 The heart is deeply mourned by the sudden demise of former Finance and Defense Minister, our senior leader and multidimensional personality Shri Arun Jaitley Ji. His demise is extremely unbearable for me. He was an outstanding politician, renowned advocate, committed activist, amazing orator and a great administrator. His death is an irreparable loss not only to the BJP but also to the politics of the country. He devoted his entire life to the country, society and to the Bharatiya Janata Party.

Shri Arun Jaitley ji continued to serve the nation till the last time along with performing various responsibilities in his political and social life. The void that has come in Indian politics with his departure can never be fulfilled. The echoes of his effective speeches inside Parliament and his smiling face even in the most difficult times will always be with us. His idea and opinion will always guide us.

As the Finance Minister during the Bharatiya Janata Party government at the Center under the leadership of Prime Minister Shri Narendra Modi, Shri Jaitley Ji has not only established the country as the world’s fastest growing economy, but also played a leading role in realizing the dream of ‘GST – One Nation, One Tax’. He also held many important portfolios during the Vajpayee government. As an energetic speaker and dedicated party worker, he was always devoted to the development of the country. We will all continue to take inspiration from Shri Jaitley Ji. His departure is also a big loss for the parliament.

It was during his tenure as India’s Finance Minister that the NDA government carried out the historic demonetisation with a view to curbing corruption, black money, fake currency and terrorism. It is the result of his efficient management that all decisions in GST Council till date were taken by consensus. During his tenure, shell companies were curbed, action started on black-money, benami property laws passed and record tax collected without raising taxes. Many unmatched achievements like Jan-Dhan accounts, Ease of doing business rankings, record success of Mudra Yojana for Self-Employment and keeping India’s economy as one of the fastest growing economies in the world came during his tenure.

During the Emergency, Shri Jaitley steadfastly fought the oppressive forces and also went to jail to protect the democratic values ​​of the country. He has been an MP from Rajya Sabha continuously since 2000. From 2009 to 2014 he was the Leader of the Opposition in the Rajya Sabha. He was also the convenor of the Akhil Bharatiya Vidyarthi Parishad.

Shri Arun Jaitley has always given a new impetus to the country as an intelligent and energetic speaker, effective parliamentarian and skilled administrator. The country will always remember his contribution and remain indebted to him. I got his guidance on every subject in the last several years.

Every member of the BJP family is shocked by the sudden demise of our senior leader Shri Arun Jaitley Ji. May his soul rest in peace and give strength to the mournful family to bear the grief. Om Shanti…