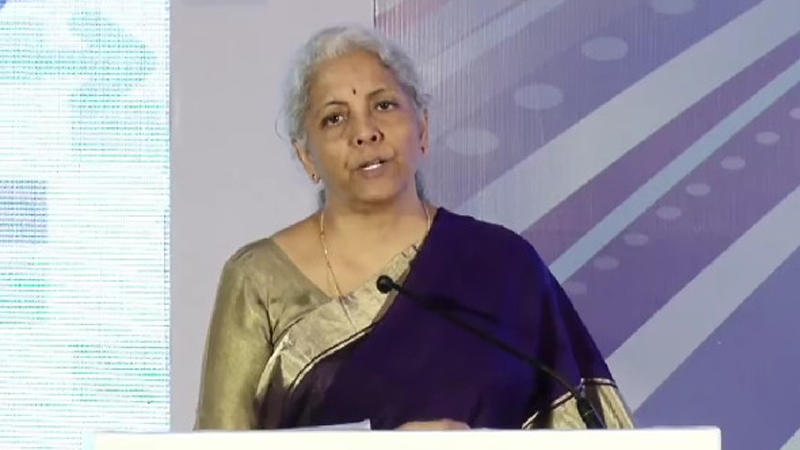 Union Minister for Finance and Corporate Affairs Smt. Nirmala Sitharaman has exhorted the banking sector to play a lead role in realising the dream of a developed India by 2047. The Finance Minister observed that the next 25 years which the Prime Minister refers to as Amrit Kaal has taken off very well, with the auspicious beginning of India becoming the fifth largest economy of the world. “We have so much and more to do, the banking industry needs to serve the Amrit Kaal, we have to see how best we can lift ourselves to meet the aspirations of a growing India. The Prime Minister has said that we need to be the developed country we deserve to be, by 2047. It is the banking sector which has to make a big contribution towards this.” She was addressing the 75th Annual General Meeting of Indian Banks’ Association in Mumbai today, September 16, 2022.

The Minister said that banks are the biggest catalysts to growth. “Professionalise your decision-making boards, there is no way banks can any longer run with a crony background, our government has ensured that there are no instructions given or interference made in the functioning of the banks. We need to take professionalism at a faster pace. We are conscious of the need to let the banks be, and let them run by professionals, with a purely banking perspective in mind.”

The Finance Minister exhorted the banks to plan for the next 25 years. “You need to have strategies to meet the aspirations of the youth of India in the next 25 years. You need to make your portfolios so that they are attractive to the young as well and make yourselves accessible to them. Are you communicating to the youth, to women, are you offering products to them?”

“Are you digital savvy? Are your staff digital savvy?” The Minister asked the banking community. “Are you comfortable in being a digital institution? How much training goes into this? Do your systems talk to each other? It will be a big missed opportunity if these bridges between banks are not built. IBA should plan to make sure that all systems in all banks, whether private or public, should be talking to each other for the purpose of the customer. Account Aggregator Framework that the customer is benefitted when such systems are put in place with the consent of the customer.”

The Minister said that such technologies also bring in benefits such as detecting fraud, tracking of wrong money, detecting unusual transactions, alerting yourself and the government. “Use of Web3, data analysis, Artificial Intelligence, deep dive into data – all of these should have some coordination by the IBA. Leveraging AI should be an immediate priority for the banks, especially in fraud detection and generating early warning signs about something going wrong.”

The Minister highlighted the importance of cyber protection for the banks. “Are you all geared to have adequate firewalls? Are you protected against hacking and Black Swan events which bring down your systems?”

The Minister underlined the importance of having staff who can speak the local language, considering the diversity of the nation. “Show inclusivity in your staff, in the way you speak to your customers. When you have staff who do not talk the regional language and who demand citizens to speak in a particular language, you have a problem. Please review the people getting posted at branches, people who cannot speak local language should not be assigned to roles dealing with customers. You must have a lot more sensible ways of recruiting people.”

The Finance Minister pointed out that there are still some areas of the country which do not yet have brick-and-mortar banks. “If there is a way you can provide ATMs or Business Correspondents in such areas, I would welcome that. The more Business Correspondents are women, the better it would be for your business. The regions which have not had enough coverage and where we can bring in digital technology, please look at what can be done. Yardsticks applicable to other areas would not apply to the North Eastern Region. We need banks there, we need financial inclusion for the region as well.” The Finance Minister said that as we move towards greater professionalism of banks, we should realise the need for banks to stand up on their own and raise their own capital. “No fraudulent account will be left without being taken to the court, fraudsters have no place in their country, banks will not suffer for money taken away by fraudsters. This is the kind of support with which we want to work with banks, I would love to see banks now plan for the Amrit Kaal. Your money is coming back, you have got the opportunity to bring more professionals.”

The Finance Minister said that maximum saturation has to be attained in government schemes such as MUDRA Yojana. She asked all banks to work on improving insurance coverage. The Minister also pointed out the importance of upgradation of Regional Rural Banks. “RRBs need a lot more assistance in digitalization, sponsoring banks need to give more attention to RRBs, including in bringing them to Account Aggregator Framework and in disbursal of agricultural credit.”

The Finance Minister told the banks that they should facilitate the customers in meeting their finance needs, with an energy of positivity. “You are in a better position now, you are not afraid of taking decisions now. I want you to now say that you are ready for good business, that we are ready to serve you, be proactive and convey to the customers that you will meet them wherever they want and do business with them, keeping your norms in tact.”

Recalling that the 75th AGM coincides with India celebrating 75 years of its independence, the Union Finance Minister said that IBA’s trajectory is very much aligned with that of the nation. “So you end up serving the nation keeping yourself aligned with national priorities.”

The Finance Minister expressed satisfaction that the banks have come out of their troubles in earlier times and are able to stand up on their strengths, in the service of the nation. “I appreciate particularly the work done by banks done during the COVID-19 pandemic, the participation with the sense of dedication by each and every bank has become a golden certificate given to you by the people. You went to the villages and delivered to the customers, despite the challenges of the pandemic.”

The Minister said that she always has a sense of gratitude to the banks, also for undertaking the amalgamation processes during the pandemic, with minimal friction. “You have gone through the tests of fire, and also met the demands made by the government in terms of higher credit to the economy.” The Minister appreciated the banks and observed that the restoration of the health of banks has been very well recognized today.

Union Minister of State for Finance Dr. Bhagwat Karad said that IBA is one of the major associations which brings together the entire industry, which promotes cooperation in the spirit of competition. He said that recent geopolitical events have posed challenges to growth and that despite this, we can be satisfied with the economic growth of the past year. The Minister said that the banking sector has played a major role in rebuilding our economy. “The banking sector is holding our economy together today, our government brought in many developments such as changes in credit cycle, increasing digitalization and regulatory changes such as IBC and discontinuation of over-greening of bad loans. Hence, all PSBs have turned profitable.”

The Minister of State said that net NPA has declined, banks have increased lending to MSME and agricultural sectors; new schemes have increased digital lending and coverage. Dr. Karad applauded the banks in increasing penetration of government schemes. The Minister said that the goal of the government is to give banking to the unbanked, security to the unsecured and funds to the unfunded.

Financial Services Secretary Sanjay Malhotra said that the banking industry is placed quite comfortably, it played a very important role in responding to the COVID-19 pandemic and beyond. “We need to keep up the momentum, India has become the 5th largest economy but we believe this is only the beginning, the banking industry has to continue the good work and support the economy in our growth going forward.”

The Secretary said that private sector banks need to play a bigger role in financial inclusion and in implementation of government schemes such as PMGKY. “We have to take along all segments of the society. Thanks in part to structural shifts, the credit to industry has decreased in recent times; we need to support the industry due to the huge multiplier effect it has on the economy. Credit to service and MSME sectors are other areas where banks need to concentrate more.”

During the function, the Union Minister felicitated the winners of PSB Reforms EASE Agenda 4.0. Bank of Baroda received the first prize among PSBs for the best overall performance on PSB Reforms EASE Agenda 4.0. State Bank of India and Canara Bank were ranked second and third respectively and were also felicitated by the Finance Minister. Indian Bank emerged as the ‘Top Improver’ across all PSBs.

During the ceremony, the Minister unveiled the annual report for EASE 4.0, marking the conclusion of the fourth edition of EASE, which was focused on ‘technology-enabled simplified and collaborative banking.’

The agenda for the fifth edition of EASE was unveiled earlier this year by the Minister of Finance. The reforms program has now been expanded into EASENext, which has been conceptualised with two broad pillars:

1) EASE 5.0 – Common reforms agenda to be achieved by all PSBs

2) Strategic 3-year roadmap specific to each PSB to focus on new strategic initiatives beyond the common reforms’ agenda.

EASE 5.0 will continue to focus on driving an enhanced digital experience along with data-driven, integrated, and inclusive banking across all banks. The 3-Year Strategic Roadmap will offer each PSB the opportunity to set its own reforms path, contextualised to its starting position and strategic priorities.