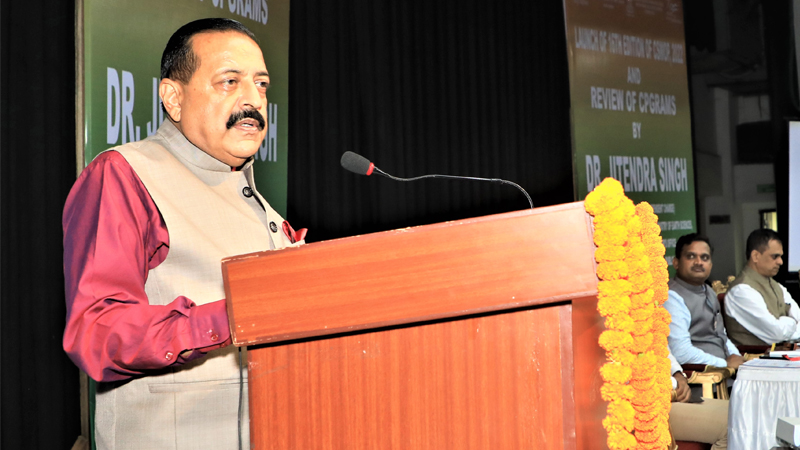 Speaking after the launch of 16th edition of Central Secretariat Manual of Office Procedure (CSMOP) 2022, the Minister said, there is continuous innovation in reforms under Modi, who takes personal interest in all governance related issues. He also informed that some of the success stories in governance reforms implemented by Modi as Chief Minister of Gujarat are being replicated at the Centre like the abolition of interviews, prompt redressal of grievances and weeding out of obsolete laws.

Dr Jitendra Singh said, since 2014, when Modi took charge at the centre, there is a visible change in the work culture and all the Ministries are strictly adhering to timelines in execution of projects. Referring to CSMOP 2022, the Minister said, after 2019, this is the 2nd Manual prepared by DARPG within such a short time under Modi Government and this is a clear-cut reflection of continuity, consistency and innovation in reforms.

Referring to productive and result-oriented reforms in grievance redressal, Dr Jitendra Singh said, Department of Administrative Reforms & Public Grievances (DARPG) in the union Ministry of Personnel has emerged as a role model, which many of the States and UTs are trying to emulate. He also pointed out that requests are pouring in from several States and UTs for linking their grievance portal with Central CPGRAMS. He said, after Jammu and Kashmir, Uttar Pradesh and Madhya Pradesh, several such requests are being received.

Dr Jitendra Singh said, the Central Secretariat Manual of Office Procedure 2022 is the 16th Edition of the CSMOP first published in 1955 to enable the march to a digital central secretariat. He said, the 16th Edition has focused on the 4-pronged approach of Delayering, Delegation, Operationalization of Desk Officer System, Digitization of Central Registration Units and Implementation of e-Office ver 7.0 as part of the silent transformation under way in the context of “Maximum Governance – Minimum Government”.

The Swachhta Assessment Report 2022 highlights that the Swachhta Campaign has resulted in holistic process improvement in disposal of pending matters by Central Ministries/ Departments with focus on cleanliness process adoption. The Swachhta Campaign activities are implemented on a regular basis in all Ministries/ Departments for 3 hours/ week. The success of the Campaign is highlighted by the efficient management of the space and bringing pendency down by significant margin. 12 lac sq. feet of space was freed and scrap worth Rs. 62 crore was disposed.

All the 4 reports will be available at www.darpg.gov.in.

The launch function was attended by all Senior Officers of DARPG, all Nodal Appellate Authorities, all Nodal Grievance Officers as also all Nodal Officers of the Special Swachhta Campaign in Government of India.