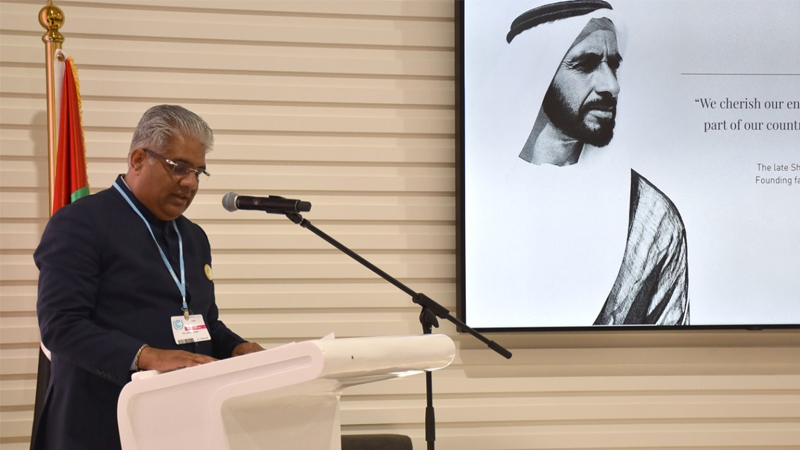 Union Minister for Environment Forest and Climate Change Shri Bhupender Yadav spoke at the Launch of the Mangrove Alliance for Climate (MAC). This event was held on the side-lines of the ongoing COP 27 at Sharm El-Sheikh, Egypt.

“I would like to thank Her Excellency, Mariam Bint Mohammed Almheiri, Minister of Climate Change and Environment, Kingdom of United Arab Emirates (UAE) and Her Excellency Siti Nurbaya Bakar, Minister of Forestry and Environment, Indonesia for hosting this event, which brings nations from around the world together under one roof, to advance the global cause of Mangroves, one of the marvels of Mother Nature.

Mangroves are one of the most productive ecosystems of the world.  This tidal forest serves as a nursery ground for several organisms, protects the coastal erosion, sequestering the carbon and providing livelihood for millions of people besides harboring array of faunal elements in its habitat.

Mangroves are distributed in the tropical and sub-tropical region of the world and are found in 123 countries.

Mangroves are among the most carbon-rich forests in the tropics. They account for 3% of carbon sequestered by the world’s tropical forests.

Mangroves are the economic foundations of many tropical coastal regions. To sustain the blue economy, it is imperative to ensure the sustainability of coastal habitats, particularly mangroves for tropical nations, at the local, regional, and international levels.

With notable adaptive features, mangroves are natural armed forces of tropical and subtropical nations. They are the best option to fight against climate change consequences like sea levels rise and increasing frequency of natural calamities like cyclones and storm surges.

India has committed in its NDC – to create an additional carbon sink of 2.5 to 3 billion tonnes of CO2 equivalent through additional forest and tree cover by 2030.

We see the tremendous potential mangroves have for mitigation of growing GHG concentration in the atmosphere. Studies have shown that mangrove forests can absorb four to five times more carbon emissions than landed tropical forests.

It has also been revealed that mangroves can act as buffer for Ocean acidification and act as sink for micro-plastics.

One of the largest remaining areas of mangroves in the world, the Sundarbans supports an exceptional level of biodiversity in both the terrestrial and marine environments, including significant populations of a range of flora and plant species; species of wildlife wide range of fauna, including the Bengal Tiger and other threatened species such as the estuarine crocodile and the Indian python. There is significant increase observed in mangroves cover in India in its Andamans region; Sundarbans region; and in the Gujarat region.

Excellencies, Distinguished Delegates and participants at this COP

India has demonstrated expertise in mangrove restoration activities for nearly five decades and restored different types of mangrove ecosystems both on its east and west coasts.

Excellencies, I congratulate you on the launch of Mangrove Alliance for Climate (MAC) for the conservation of mangroves with cross boundary cooperation to meet the intentional climate goals. We also feel that Integration of mangroves into the national REDD+, Reducing Emissions from Deforestation and Forest Degradation programs are the need of the hour.

India can contribute to the global knowledge base due to its extensive experience in mangrove restoration, studies on ecosystem valuation and carbon sequestration and also benefit from associating with other nations regarding cutting-edge solutions and generating appropriate financial instruments for mangrove conservation and restoration.

Let us join hands together to protect one of the most precious assets of the tropical coasts, towards sustainability and adaptation to the consequences of Climate Change.”