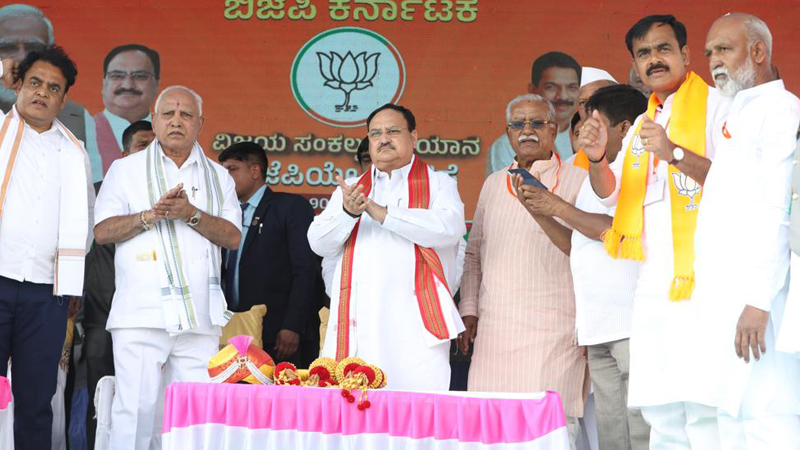 The Bharatiya Janata Party National  President Shri Jagat Prakash Nadda ji today (Saturday) flagged off the statewide Vijay Sankalp Yatra from Vijaypura in Karnataka and appealed to the people of the state to once again form the double engine government of the Bharatiya Janata Party in Karnataka under the leadership and guidance of our Honourable Prime Minister Shri Narendra Modi ji so that the works of growth and development could continue uninterrupted.

Those present at the programme included senior party leader Shri B S Yeddyurappa and other senior party leaders and workers. Before flagging off the Vijay Sankalp Yatra, Shri Nadda visited Shri Siddeshwar Mahaswami ji’s Gyan Yogashram in Vijaypur and offered rich tributes. He passed away recently. Later the BJP National President visited Nagthana assembly constituency in Vijaypura from where he flagged off the 9- day statewide Vijay Sankalp Yatra.

At the centre of the Bharatiya Janata Party’s statewide Vijay Sankalp Yatra are five programmes where the goal is to reach over 2 crore people covering every household across the state, to put wall paintings in houses with the permission of house owners, to make digital wall paintings, carry out membership drive and talk to the beneficiaries of various government programmes and policies.