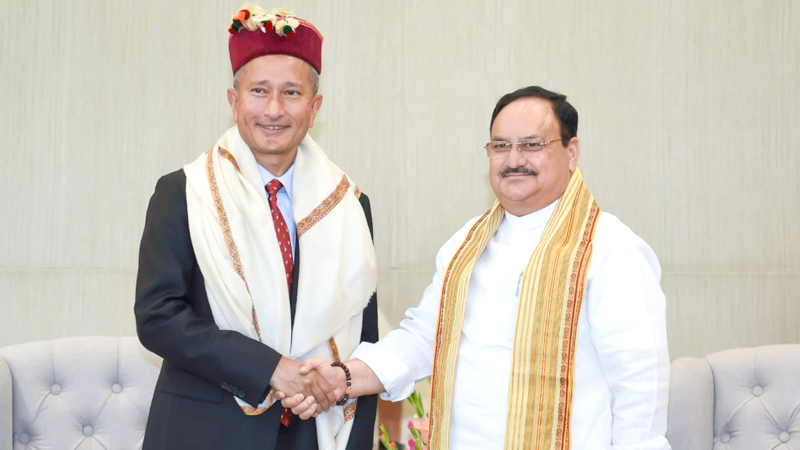 The Bharatiya Janata Party National President Shri Jagat Prakash Nadda today interacted with the Minister for Foreign Affairs of Singapore, Dr. Vivian Balakrishnan, at the party’s headquarters in Delhi. He was accompanied by Singapore High Commissioner to India, Shri Simon Wong. The two leader discussed ways to strengthen the India-Singapore Strategic Partnership and exchanged views on regional and international developments.

Dr Balakrishnan is familiar with India and is on an official visit for bilateral and multilateral discussions on ASEAN with the government of India. His visit marks the 30th anniversary of the Asean-India Dialogue Relations.

In his address, the BJP President welcomed the visiting Foreign Affairs Minister of Singapore. Shri Nadda briefed Dr Balakrishnan about the prevailing political situation in India. He also informed Dr Balakrishnan about the functioning of the BJP and how it is engaging with youth and other sections of the society besides how the world’s largest political party engages with its workers at the grassroot level. The two leaders also discussed various issues of national and international importance.

The two sides had insightful discussions on various contemporary issues. Shri Nadda briefed Dr Balakrishnan about the BJP’s structure and how it functions, how its leadership is developed, and how the party coordinates with its governments at the Centre and the states. Shri Nadda also talked about the history, ideology and principles of the BJP. The BJP President gave historical perspective on various complex issues that the BJP government has resolved during its rule under the dynamic leadership of Honourable Prime Minister Shri Narendra Modi ji which include the scrapping of Article 370 from Jammu and Kashmir.

In his concluding remarks, Dr Balakrishnan thanked Mr Nadda for hosting him at the BJP headquarters and having insightful discussions. Dr Balakrishnan said he got new information and clear perspective about the BJP’s activities and its functioning, and also about the various initiatives and programmes of the Narendra Modi government.

Significantly, Shri Nadda has in recent months hosted a series of meetings with the Diplomats/Head of Missions of 47 countries including the European Union as part of the BJP’s new initiative ‘Know BJP’ with the aim to having close ties with countries and political parties across the world. In the fourth phase Shri Nadda recently held dialogues with the diplomats of 13 countries at the BJP headquarters.