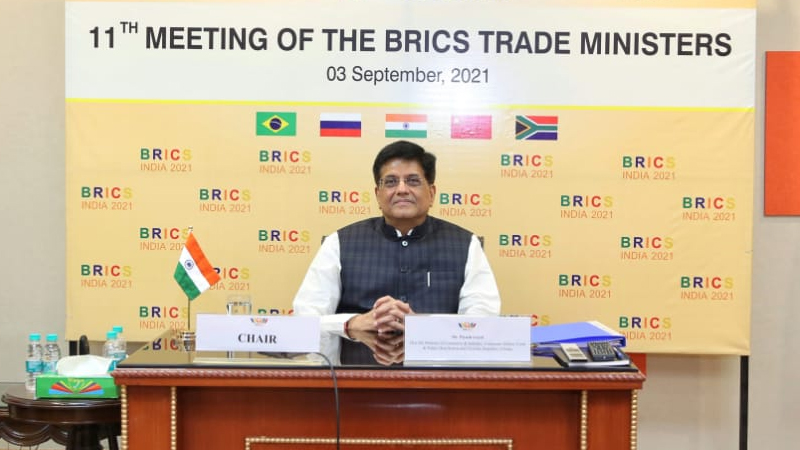 The 11thBRICS Trade Ministers Meeting was held in virtual format under the Chairship of India on 3rd September, 2021. Shri Piyush Goyal, Minister of Commerce and Industry, Consumer Affairs, Food & Public Distribution and Textiles chaired the meeting. The meeting was attended by Trade and Economic Ministers of BRICS Countries (Brazil, Russia, India, China and South Africa).

Union Minister Shri Goyal in his opening remarks, welcomed his counterparts to the Meeting being held in the year when India is celebrating 75th year of independence – ‘Azadi Ka Amrit Mahotsav’.

Referring to the impact of COVID-19, he mentioned about the various immediate supportive actions taken by India, including the milestones reached in vaccination as well as the significant fiscal and monetary support extended to overcome its impact. He stressed for the BRICS countries to work together for strengthening the Multilateral system, with WTO at its core, and need for a balanced and inclusive outcome in the forthcoming WTO Ministerial Conference (MC12)keeping in mind the developmental needs of developing countries and Least Developed Countries. He highlighted the principles of Special & Differential Treatment and the “Common but Differentiated Responsibility”. He also emphasized, amongst other things, on the need for a permanent, adequate and equitable solution to the Public Stock Holding programmes for food security purposes; early outcome of the TRIPS Waiver proposal for vaccines, therapeutics and diagnostics; adoption of emerging new technologies in a swiftly changing world while finding solution to the challenges of data protection and cyber security; and ensuring sustainable consumption and production patterns.

Shri Goyal noted that despite numerous challenges and constraints, on account of the COVID–19 pandemic and the associated travel restrictions, India was successful in building consensus for new areas of work and cooperation amongst BRICS countries. Common understanding amongst BRICS countries for the first time on those areas resulted in new declarations related to consumer protection, e-commerce, genetic resources and traditional knowledge, cooperation in professional services apart from others such as a common approach towards the multilateral trading system for the WTO Ministerial Conference (MC- 12).

BRICS countries endorsed the Framework for Cooperation in Trade in Professional Services with the objectives of enhancing domestic capacity and global competitiveness, promoting participation in intra-BRICS mobility of professionals and enhancing intra-BRICS trade in professional services. This is definitely a move forward for advancing co-operation in this sphere in areas or sub-sectors of mutual interest.

All BRICS members could for the first time reach a consensus for jointly working towards protection of genetic resources, traditional knowledge and traditional Cultural Expressions so as to address the issue of its misappropriation through mandatory disclosure of source of origin of the resource and the disclosure of the evidence of prior informed consent and access and benefit sharing. This will also help moving together in international forums on this issue.

In this era of exponential jump in the use of e-commerce and online electronic transactions, the convergence to draw a common Action plan amongst BRICS countries will help in to promote exploring practical options for ensuring consumer protection.

India could successfully draw a common implementation roadmap for the BRICS countries in the field of trade and investment to meet the aspirations of the BRICS strategy 2025.

The theme chosen by India for its BRICS Chairship is BRICS@15: Intra BRICS Cooperation for Continuity, Consolidation and Consensus. During the year, India has successfully conducted activities including the 2nd edition of the BRICS Trade Fair (in virtual mode), a unique event by India amongst the BRICS countries wherein more than 600 companies from BRICS countries showcased their products and services. Workshops in Services Trade Statistics enabled sharing of best practices and learning from each other to bridge the gap in services data compilation methodologies. The MSME Roundtable was held to promote the cause of the MSME sector through learning of best practices amongst BRICS countries. India has also organized a number of B2B events through the BRICS Business Council and the BRICS Women’s Business Alliance to advance business cooperation in BRICS countries.

The BRICS Ministers appreciated India for having made significant contributions to BRICS cooperation through these initiatives. The Ministers adopted the 11thBRICS Trade Ministers’ Joint Communique and five other documents proposed by India. The Hon’ble BRICS Ministers acknowledged the importance of strengthening intra-BRICS cooperation in achieving the common goal of making our goods and services globally competitive and further integrating into the global value chain.

The meeting ended with the Shir Piyush Goyal thanking the BRICS Countries for their support in taking the BRICS agenda forward and expressed hope to meet at the upcoming G-20 and MC-12 meetings of trade ministers.