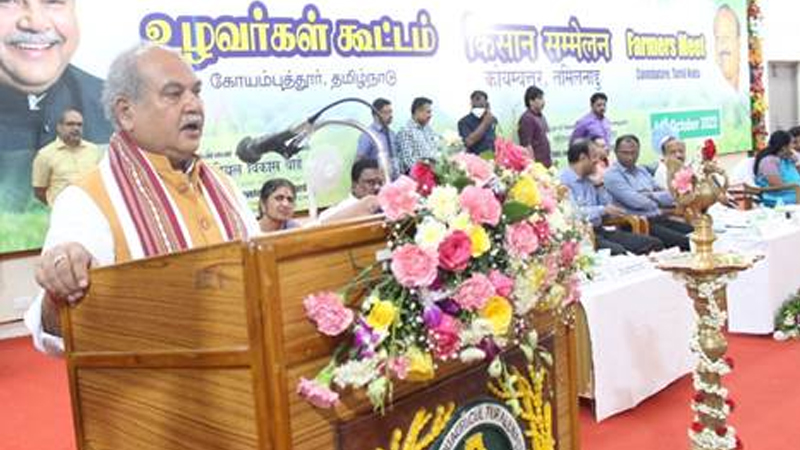 The Union Minister for Agriculture and Farmers Welfare, Shri Narendra Singh Tomar has said that the Centre will continue to provide all possible assistance to the farmers in the coastal states to promote coconut cultivation in the country. The efforts made in the field of research and development in the last few years have resulted in the development of new technologies in the field of farming and processing and further improved the available technologies. With the increase in the number of coconut based industries in the country, new products and many employment opportunities are also increasing in the market. Shri Tomar was addressing the Coconut Community Farmers’ Conference in Coimbatore, Tamilnadu.

Shri Tomar further said that he is happy to be among the coconut farmers, he congratulated the Coconut Development Board and Sugarcane Breeding Institute for their initiatives towards the prosperity of the coconut growers community. He said that the agriculture sector is the backbone of the country’s economy, so it is the responsibility of the Central and State governments to strengthen it, promote it and ensure profitable farming for the farmers. The contribution of coconut cultivation in the agricultural economy is very important. India is a leader in coconut cultivation and amongst the world’s three largest producers. Tamil Nadu contributes 21 percent of the area under coconut in the country and 26 percent of the production. Tamil Nadu ranks first in coconut processing activities and Coimbatore is first in terms of area under coconut cultivation, with an area of ​​88,467 hectares under coconut cultivation. Shri Tomar said that the farmers are making significant contribution in the development of coconut sector and increasing the agricultural economy. Coconut Development Board is forming a three-tier farmer group by integrating small and marginal farmers. Presently there are 697 Coconut Growers Societies, 73 Coconut Growers Federations and 19 Coconut Producing Companies in the State. Support has been given to set up 537 new processing units in India with a processing capacity of 3,638 million coconuts per year. This success has been achieved through the Mission Programme implemented by the Coconut Development Board in the country. Out of these, 136 units are from Tamil Nadu, which are creating employment opportunities and also helping improve the financial condition of the farmers.

Shri Tomar said that even after everything is favourable in the field of agriculture, farmers have to face natural disasters, which causes them losses. It is compensated through the Pradhan Mantri Fasal Bima Yojana and the Tamil Nadu State Scheme. Agriculture contributes significantly to strengthen the economy, he said.  Agriculture is so fundamental that it has helped tide over adverse conditions like Covid-19.

Shri Tomar said that Prime Minister Shri Narendra Modi has taken many steps for the betterment of agriculture sector in the last 8 years. Through the Pradhan Mantri Kisan Samman Nidhi (PM-Kisan), more than Rs 2 lakh crore has been deposited in the accounts of about 11.50 crore farmers. In lieu of damage to crops due to natural calamity in last 6 years, claim amount of more than Rs.1.22 lakh crore has been deposited in the accounts of the farmers through the Pradhan Mantri Fasal Bima Yojana. Earlier, there was a provision of Rs 5,000 crore under the micro irrigation scheme, which has been increased to Rs 10,000 crores. 70 lakh hectare farming area has been brought under micro-irrigation. Under the Kisan Credit Card scheme, earlier crop loans were given to farmers only up to five to six lakh crore rupees only, which has been increased by the Prime Minister to about Rs. 18-and-a-half lakh crores. To improve the infrastructure in each and every village, a provision of Rs. one lakh crore Agri Infra Fund has been made. Farmers, group of farmers, FPOs, PACS, Krishi Upaj Mandis all can use this to develop warehouse, cold storage or infrastructure as per requirement in villages. The government is trying to make farmers grow remunerative crops, setting up processing units through FPOs, for which arrangements for loans and subsidies have also been made.