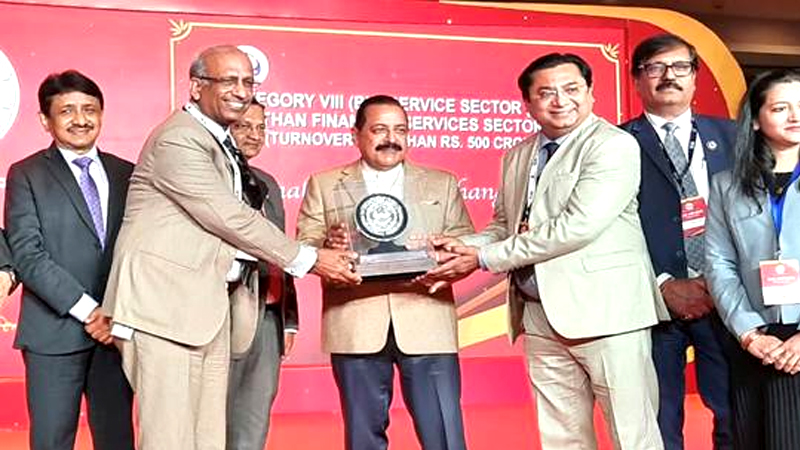 Union Minister of State (Independent Charge) Science & Technology; Minister of State (Independent Charge) Earth Sciences; MoS PMO, Personnel, Public Grievances, Pensions, Atomic Energy and Space, Dr Jitendra Singh said here today that Chartered Accountants are the conscious keepers of nation’s account and therefore, integrity of their own conscience is vital for the health of a nation in general and the financial health of a nation in particular.

Dr Jitendra Singh was, as chief guest, speaking at the Annual Award presentation event of the Institute of Chartered Accountants of India (ICAI), where he presented Awards for Excellence in Financial Reporting and International Sustainable Reporting to the country’s different corporate houses as well as public and private sector units. CA Nihar Jambusaria, President ICAI and CA (Dr.) Debashis Mitra, Vice-President ICAI also spoke on the occasion. Among the recipients of awards were some of India’s leading corporate and public sector houses including Tatas, Mahindra & Mahindra, Reliance, NHPC and others.

In his address, Dr Jitendra Singh noted that the Institute of Chartered Accountants of India, the country’s premier accounting body, has been entrusted with the task of establishing solid accounting practices and standards to be followed by all concerned. In doing so, he said, the ICAI has to live up to high expectations of following supreme standards of accountability, excellence and honesty, in the interest of nation building.

The Minister reiterated that Prime Minister Narendra Modi has introduced a series of path breaking measures to bring “ease of business” and at the same time to raise the Indian economy in compatibility with the global benchmarks. In times like this, he said, the role of ICAI becomes all the more critical over the years to come.

Financial reporting is critical to the successful operations of financial markets, said Dr Jitendra Singh, because it provided even-handed objective and unbiased information through annually published reports. This, in turn, also helps the Government and its agencies in allocating required resources and serves as the foundation for calculating nation’s income and other related areas, he said.

Established in 1958, the “Institute of Chartered Accountants of India Awards for Financial Reporting” provide a credible platform for various companies to improve their standards of financial reporting. However, this year, for the first time, the ICIA has also introduced “Sustainable Reporting Awards’ with the noble purpose of recognising and awarding organisations which have made outstanding contributions in fields like Climate Change, Gender Equality, etc.