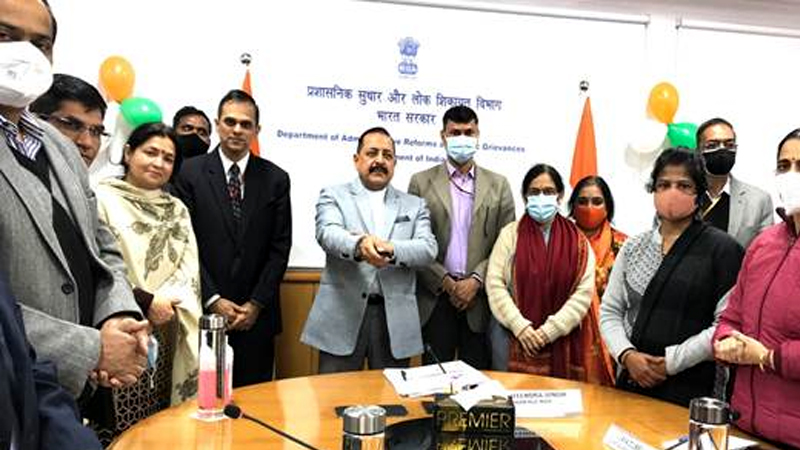 Speaking after the launch, the Minister said, under the leadership of Prime Minister Narendra Modi, the entire concept and format of the PM’s Excellence Award has undergone a revolutionary change since 2014. PM’s Award for Excellence in Public Administration portal for the year 2021-2022 is www.pmawards.gov.in.

Referring to Prime Minister Narendra Modi’s exhortation to the civil servants to “change their role from being a regulator to an enabling entity to turn the challenges into opportunities” Dr Jitendra Singh said, officers must become a facilitator to bring the “Ease of Life” for the common man.

Dr Jitendra Singh said, after 2014, the process and selection of PM’s Excellence Award have been institutionalized and now this is based on the performance of the District, rather than that of the District Collector or individual civil servant. He said, another improvisation brought is to assess the scale and rating of the implementation of Flagship Schemes in the district.

The Minister also added that the prize money was also doubled this year from Rs.10 lakh to Rs.20 lakh to the awarded District/Organization which is to be utilized for implementation of project/programme or bridging resource gaps in any area of public welfare. The Minister informed that it is now mandatory for all District Collectors to apply for the Award. At the same time, he noted with satisfaction that from 80 districts in 2015, for the last two-three years all districts are participating in the award scheme. For the year 2021, the scheme for Prime Minister’s Awards for Excellence in Public Administration aims to recognize the contribution of civil servants in: 1)Promoting “Jan Bhagidari” or Peoples’ participation in Poshan Abhiyan 2)Promoting excellence in sports and wellness through Khelo India scheme 3) Digital Payments and good governance in PM SVANidhi Yojana 4) Holistic Development through One District One Product scheme 5) Seamless, End-to-End Delivery of Services without Human Intervention and 6) Innovations

The applications for the award would be required to cover all the aspects of implementation of a scheme in holistic manner, such as, activities covering production stage, quality control, governance and outcomes.

The eligibility to submit nominations for the Prime Minister’s Awards 2021 will be open to the following:Awards for Scheme 1, 2, 3 and 4 for holistic development to Districts, while Award for Scheme 5 shall be open to Districts, as well as any service providing Department/ Organisation of Centre or State with one Award for the District and one Award for others. Awards for Innovation: Organizations of Central/ State Governments / Districts/Implementing Units.

The Period of consideration is 1st April 2019 to 31st Dec, 2021. The total number of Awards under the Prime Minister’s Awards for Excellence in Public Administration 2021 would be 18.

The Criteria for evaluation of PM’s Awards, 2021:Based on pre-determined indicators in consultation with Line Ministries/ Departments (excluding Innovation). There would be a mix of common parameters across schemes and flexible parameters which would be provided by the concerned Line Ministries/Department.The award for Innovation Category will be evaluated based on introducing and implementing an innovative idea/ scheme/project to meet stakeholders’ requirements.

The evaluation process would include; (i) Short-listing of Districts/Organizations by Screening Committee (first and second stage); (ii) Evaluation by Expert Committee and (iii) Empowered Committee. Prime Minister’s approval will be taken on the recommendations of the Empowered Committee for the Awards.

The PM’s Awards, 2021 will consist of:(i) Trophy, (ii) scroll and (iii) an incentive of Rs.20 lacs to the awarded District/organization to be utilized for implementation of project/ programme or bridging resource gaps in any area of public welfare. A Certificate of Recognition, a copy of which will be placed in the APAR of the officer/ team submitting the nomination. A letter of appreciation to be issued by the Secretary (ARPG) to the officers who have contributed towards the initiative with a copy to Chief Secretary / Secretary of concerned Central Ministry/ Department. A copy of the letter to be sent to DOPT for placing in the Performance Appraisal Dossier of the officer.

Senior officials of DARPG also took part in the launch event. Secretary, DARPG, V. Srinivas spoke on the occasion and said that the Prime Minister’s Awards for Excellence in Public Administration, 2021 is given to acknowledge, recognize and reward the extraordinary and innovative work done by Districts/Organizations of the Central and State Governments.