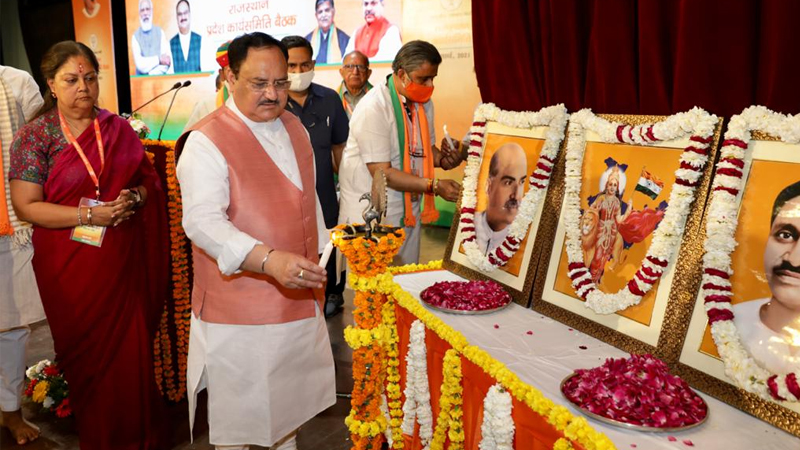 Hon’ble BJP National President Shri Jagat Prakash Nadda on March 2 addressed the Rajasthan State BJP Executive Meeting in Jaipur and said,  results of the Lok Sabha elections clearly demonstrate that the people of Rajasthan are not happy with the mis-rule of the Gehlot government in the state and have made up their minds to bring the Bharatiya Janata Party (BJP) back to power. This is our responsibility that we should work with full force to live up to the expectations of the people of Rajasthan.

Hon’ble National President said, under the leadership of our Prime Minister, Shri Narendra Modi, we have to work towards bringing the last man in the society into the mainstream. Working with the motto of Sabka Saath, Sabka Vikaas, Sabka Vishwas, today India is scripting new success stories of development everyday.

So far, the Opposition and so called farmer leaders have only done lip service and their politics has been concentrated around mis-guiding the farmers. It has been our Prime Minister, Shri Narendra Modi, who has constantly sired to uplift the conditions of the farmers in the country.

The three farm laws will change the face of farming and farmers in India, this is guaranteed. The Congress party and its allies as well as the so- called farmer leaders are doing petty politics for their own narrow political benefits by mis-guiding the farmers on the farm laws.

Congress and companies when they are in power will speak in favour of farm reforms, but as soon as they become part of the Opposition, they start criticising them. This has become the hallmark of the Congress party.

Congress has become famous for not fulfilling its promises, it has become a part of history now. Congress is so frustrated and eager to come to power that it will take promises that it will never be in a position to meet. The party’s promise of a debt waiver in Rajasthan is one such example.

If one looks at the Transparency International Report, it says that Rajasthan is the most corrupt state of India. It is a matter of great sorrow and dejection that crime and atrocities against women has gone up in Rajasthan. The condition of safety and security of women is pathetic in the state.

Congress party believes that it has to perpetually keep on lying and people will listen and start believing it. But the times have changed now. We have to expose the Congress party before the public.

It was due to inspiration and motivation by our Honourable Prime Minister Shri Narendra Modi ji our capable and outstanding scientists made not one but two ‘Made in India’ vaccines, all this has left the world amazed with India’s prowess and capabilities. India has so far supplied Corona vaccines to 20 nations while several other nations have given orders for the vaccines.

For the Bharatiya Janata Party, our workers are our means to find solutions to our problems. They are our strength. Our workers should not work as post offices but workers should work together for the benefit and welfare of each and every citizen. ‘Leader’ is not made by his speeches or made by someone, Leader is made by his actions.