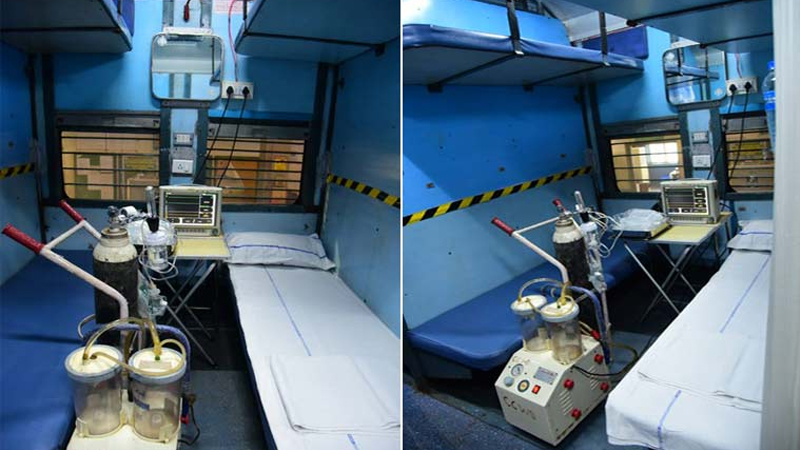 In the relentless fight against Covid19, Railway officials and teams continue their momentum to reach-out to State Health Authorities and Administrations through timely and co-ordinated action. Through focused monitoring and detailed work-flow protocols, the Railway were able to move Isolation Coaches to diverse parts of the country as per States’ demand. The Isolation Coaches which are stationed on platforms have been duly barricaded, make-shifts tents provided and every endeavour is being taken for facilitation of the medical personnel on duty here. Where permanent facilities for don-doff of PPE kits were not available, the Railways have endeavoured to provide separate temporary units in dedicated coaches for men and women healthcare personnel. RPF Staff are posted at these health care facilities round the clock. The Railway has also made provision of 2 oxygen cylinders and fire extinguishers in each coach to meet emergencies. Among other things, the Railways have also enabled directional guidance, ramp facility for patient transport at these coaches.

The Isolation Coaches are now deployed at 17 stations in 7 states of the country and catering to Covid Care patients. At present, 298 coaches have been handed over to various states for covid care with a bed-capacity of more than 4700 beds. The Coach deployment to the 7 states is as under:

In all, the Railways have deployed 60 coaches in the State of Maharashtra. At Nandrubar, the health facility has witnessed a steady registration of Covid patients and subsequent discharge through due medical certification after the isolation period. Cumulatively upto now, 116 admissions were registered with 93 subsequent discharge of patients by State Health Authorities. 23 patients are utilising the facility here now. The Railway has also positioned 11 Covid Care Coaches (with one coach serving exclusively for medical personnel and supplies) at Ajni Inland Container Depot and handed over to Nagpur Municipal Corporation. 9 patients were admitted here and all discharged post-isolation. At Palghar, where the Railways recently provided 24 coaches, the facility is now functional.

The Railways have deployed 42 coaches in the State of Madhya Pradesh. The Ratlam Division of Western Railway has deployed 22 Coaches with a capacity of 320 beds at Tihi Station near Indore. 21 patients are admitted here so far while 7 patients were discharged. At Bhopal, where 20 coaches are deployed. At this facility, there were 29 admissions with 11 patients discharged as per latest data. As on date 18 patients are utilising this facility. 302 beds are available at this facility.

In the latest update, with latest demands from the State of Assam, Railway has swiftly moved 21 isolation coaches to Guwahati and 20 Isolation Coaches to Badarpur near Silchar (N. F. Railway). Earlier in the week, Isolation Coaches were deployed at Sabarmati, Chandlodiya and Dimapur respectively.

In Delhi, the Railway has catered to the full demand of State Governments’ demand for 75 Covid Care coaches with a capacity of 1200 beds. 50 coaches are positioned at Shakurbasti and 25 Coaches at Anand Vihar Stations. 5 admissions were registered with all discharged. A total of 1200 beds are available here.

In UP, though coaches have not yet been requisitioned by State Govt, 10 coaches each are placed at Faizabad, Bhadohi, Varanasi, Bareli & Nazibabad totalling to a capacity of 800 beds (50 coaches).

The Railways has made available a fleet of more than 4400 Isolation Coaches with around 70,000 beds to serve as Isolation Units.