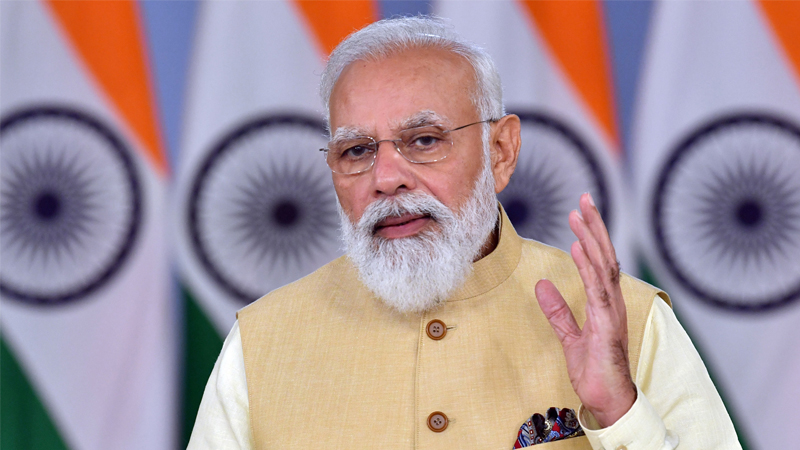 The Prime Minister, Shri Narendra Modi delivered video address in an event organized by the Defence Ministry to dedicate the seven new Defence Companies to the Nation. Raksha Mantri Shri Raj Nath Singh and Raksha Rajya Mantri Shri Ajay Bhatt, among others, were present on the occasion.

In his address, the Prime Minister noted the auspicious occasion of Vijay Dashmi today and the tradition of worshiping arms and ammunition on the day. He said, In India, we see power as a medium of creation. He remarked that with the same spirit, the nation is moving towards strength.

He also paid tributes to Dr APJ Abdul Kalam and said that Dr Kalam dedicated his life to the cause of a strong nation and said that Restructuring of Ordnance Factories and creation of 7 companies will give strength to his dream of strong India. New Defence companies are a part of the various resolutions which the nation is pursuing to build a new future for the country during this Amrit Kaal of India’s independence, he added.

The Prime Minister said that the decision of creating these companies was stuck for a long time, and expressed the belief these 7 new companies would form a strong base for the military strength of the country in the times to come. Noting the glorious past of Indian ordnance factories, the Prime Minister commented that upgradation of these companies was ignored in the post-independence period, leading to the country’s dependence on foreign suppliers for its needs.  “These 7 defence companies will play a major role in changing this situation”, he said.

He also mentioned that these new companies would play an important role in import substitution, in line with the vision of Atma Nirbhar Bharat. An order book of more than Rs. 65,000 Cr. reflect the increasing confidence of the country in these companies, he added.

He recalled the various initiatives and reforms undertaken in the recent past that have created Trust, Transparency and Technology driven approach in the defence sector like never before. Today private and public sector are working hand in hand in the mission of national security, he added. He cited Uttar Pradesh and Tamil Nadu Defence Corridors as examples of the new approach. He noted as new opportunities are emerging for the youth and MSME the country is seeing the result of policy changes in the recent years. “Our defence export has increased by 325 per cent in last five years”, he added.

He mentioned that it is our target that our companies not only establish expertise in their products but also become a global brand. He urged that while competitive cost is our strength, quality and reliability should be our identity. He further mentioned that in the 21st century, growth and brand value of any nation or any company is determined by its R&D and innovation. He appealed to the new companies that Research and innovation should be a part of their work culture, so that they just don’t catch up but  take lead in future technologies. This restructuring would provide more autonomy to the new companies to nurture innovation and expertise and the new companies should encourage such talent, he added. He urged the start-ups to become a part of this new journey through these companies to leverage the research and expertise of each other.