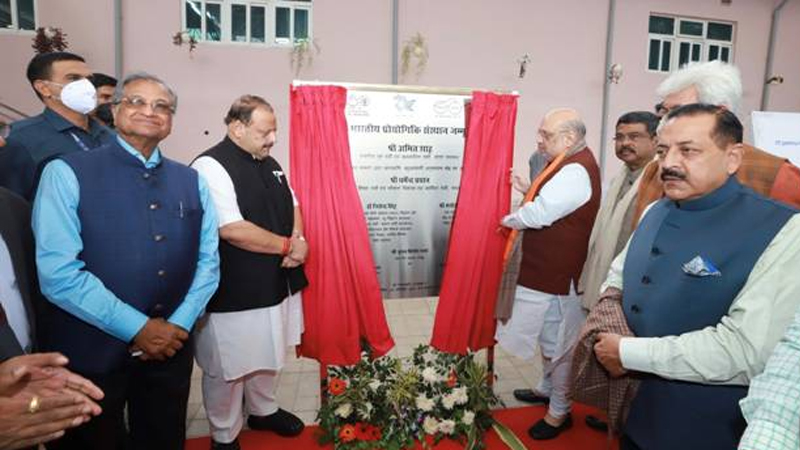 The Union Minister of Home Affairs and Minister of Cooperation, Shri Amit Shah inaugurated the new campus of the Indian Institute of Technology (IIT) in Jammu on the second day of his visit to Jammu and Kashmir today. The new campus of IIT Jammu, built at a cost of Rs. 210 crore, provides all facilities like good hostels, a gymnasium and indoor games along with higher education to students. Shri Amit Shah also inaugurated and laid the foundation stone of various development projects for Jammu and Kashmir. Several dignitaries including the Lieutenant Governor of Jammu and Kashmir, Shri Manoj Sinha, Union Education Minister Shri Dharmendra Pradhan and Minister of State in the Prime Minister’s Office, Shri Jitendra Singh were also present on the occasion.

In his address, Shri Amit Shah said that today is a pious day, the birthday of Pandit Premnath Dogra and not only Jammu but the people of India can never forget Premnath Dogra. It was that great personality who by establishing Praja Parishad, along with Shyama Prasad Mookerjee, gave the slogan of ‘Ek Desh Mein Do Nishan, Do Vidhan and Do Pradhan Nahi Chalenge’.

Shri Amit Shah said that the era of injustice to the residents of Jammu is over and now no one can cause any injustice to them. You have faced injustice for years but now Jammu and Kashmir will develop together and both will take India forward together. He said that the era of development which is starting here today, is being disturbed by disruptive elements. But I assure you that no one will be able to stop the development of Jammu and Kashmir. 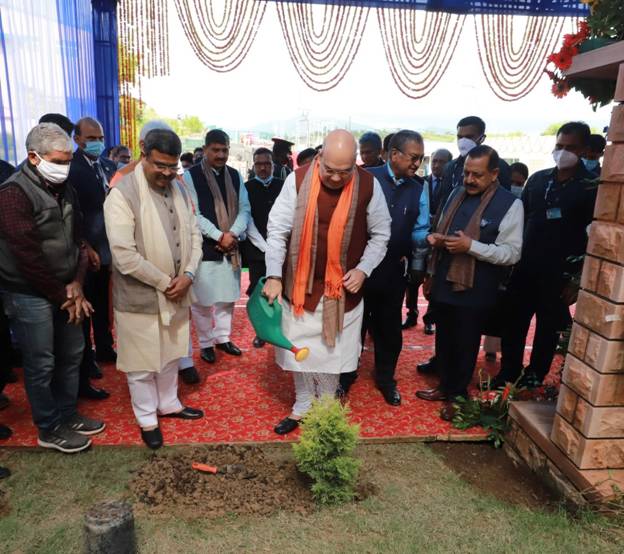 The Union Home Minister said that on August 5, 2019, Prime Minister Narendra Modi took a historic decision, ended Articles 370 and 35A which were in effect for many years and lakhs of citizens of Jammu and Kashmir received their rights. Earlier people did not have the right to buy land, refugees did not have rights, people did not get reservation. But, now no one has to fear, because all the rights under the Indian Constitution are available to everyone. Women were also given their rights.To protect the interests of workers, the Minimum Wage Act was implemented, the Safai Karamcharis Act was implemented, to protect the rights and interests of the Dalits and tribals and to stop the atrocities, land was leased to tribals and this right was also given by the Narendra Modi government.

Shri Amit Shah said that today many schemes have been inaugurated. There was a time when there were only four medical colleges in Jammu and Kashmir and today seven new medical colleges have been established in Jammu and Kashmir, out of which five have started. Earlier there were 500 medical seats, now 2,000 students pursue their MBBS degree and no one needs to go anywhere. I have not seen a modern IIT campus like the one which has been inaugurated here today. Discussions were also held about how IITs, IIMs and AIIMS will complement each other by creating new types of courses together. There was also a discussion on the training of children from Jammu and Kashmir by opening a satellite campus so that morechildren from Jammu and Kashmir can be admitted to the IIT. The Union Home Minister said if 45,000 youth are engaged in the service of the poor of Jammu and Kashmir, then terrorists cannot harm anything and these youths will change Jammu and Kashmir within no time. Apart from this, 25,000 government jobs have been given by the Service Selection Board, out of which 7,000 people have been given appointment letters today.

Shri Amit Shah said that investment will help create 5 lakh new jobs. So far, land has been allotted for an investment of Rs. 7,000 crore in Jammu and Rs. 5,000 crore in Kashmir. He said that when we announced the new industrial policy,  three families, who have exploited you for years, used to ask who would come here. But it is the magic of Shri Narendra Modi that till now an investment of Rs.12,000 crore has been received and before 2022 an investment of around Rs. 51,000 crore will be received. With this, 5 lakh youth of Jammu will get jobs. 9 medical colleges, 15 nursing colleges, IITs, NITs, IIMs, NIFT, IIMC, 2 Cancer Institutes, polytechnics, B.Sc nursing colleges, many institutes have been built and started here. Shri Shah said three families asked me that what will you give to the people here. I have come with an account of what we will give, but what have you three families who ruled for 70 years given, show what you have done. The people of Jammu and Kashmir are demanding to know what you did for them.  He said that Shri Narendra Modi had given a package of Rs. 55,000 crore as soon as he became the Prime Minister, out of which Rs. 35,000 crore has been spent and 21 schemes have been completed, and you ask what have we done for the people here?. Where you ever worried about anyone else except your family. This is the rule of Shri Narendra Modi, there will be no injustice and no one will be appeased. The Union Home Minister said that today some people raise questions about security, I want to give some figures to them. Between 2004-2014, 2,081 civilians died, 208 civilians per year. From 2014 to September 2021, 239 civilians lost their lives in an unfortunate manner which is 30 per year instead of 208. Shri Amit Shah said that we want to create a situation where not even a single person is killed and terrorism ends completely.

Shri Amit Shah said that there was no reservation for persons belonging to the Scheduled Tribes. Seats will be reserved for Scheduled Castes and Tribes and a Commission has been formed for this, the castes of other backward classes are going to be decided. Shri Shah said that 4 percent reservation has been given for hill tribe communities and now their representative will sit with pride in the assembly and will come in your midst as a minister. Reservation has also been given for people living near the international border and reservation will be arranged for the Gurjars in no time. The Union Home Minister said that work is continuing on a six-lane expressway from Delhi to Katra via Amritsar. For the first time since Independence, the focus has been on tourism in Jammu and religious tourism circuits are being developed. He said that in March this year alone, about 62,000 travelers from abroad came to the Jammu region, which is a record till date. Shri Amit Shah said that earlier the people of Jammu had to go to Delhi to show their children the metro railway. He said that after two years they not have to take their children to Delhi to travel in the metro, because the metro itself will come to Jammu. The metro is about to start in Jammu and Srinagar. He said that a large piece of land has been allotted for Jammu airport and the airport will be developed with Rs. 700 crore. The Union Home Minister said that yesterday a helicopter policy has been announced under which the Jammu and Kashmir Government will build helipads in every district. People from the private sector will invest and different sectors will be linked together.

Shri Amit Shah said that the Modi government has spent Rs. 35,000 crore on hydroelectric projects in 4 years to provide electricity to villages of Jammu and Kashmir. He said that many projects which were put on hold by the three families for commission, have been started by Shri Narendra Modi and the Lieutenant Governor of Jammu and Kashmir. The Union Minister of Home Affairs and Minister of Cooperation said COVID-19 had shocked the whole world and people started thinking howwould a country like India combat the disease.Our health infrastructure was slightly weak but the Prime Minister fought COVID-19 in the best way in the world and the death rate remained thelowest in India. He said that 100 percent of the first dose of COVID-19 was administered in Jammu and Kashmir and the second dose has been received by over 50 percent. Shri Amit Shah said that Shri Narendra Modi has started the Pradhan Mantri Ayushman Bharat Yojana, under which the Government of India bears all the health expenses of 60 crore poor of the country up to Rs 5 lakh. He said  Jammu and Kashmir is the only state in the country where this scheme is not only for the poor, but for every citizen of Jammu and Kashmir, who is receiving Rs. 5 lakh benefit under the SEHAT and Ayushman Bharat scheme. This shows how much attachment the Prime Minister has for Jammu and Kashmir.

Shri Amit Shah said that gas, toilets and electricity have been provided to all houses, as well as the task of providing employment to all the households has also begun. The Khadi Village Industries Board has connected about 5 lakh women with the bee boxes and electric wheels. The Union Home Minister said that the greatest work done by the Prime Minister is to establish democracy at the grass roots level in Jammu and Kashmir. Shri Amit Shah said what did 3 families give to Jammu & Kashmir in 70 years, – 87 MLAs and 6 MPs. Shri Narendra Modi has provided 30,000 elected representatives. Within every village there is a Panchayat, inside every Tehsil, a Tehsil Panchayat has been formed, within every district, a Zila Panchayat has been formed. He said now these three families cannot have their way. Now the Panchs, Sarpanchs can also become a minister in the Government of India, can become the Chief Minister of Jammu and Kashmir. Even the one who wins an election from the hills can become the Chief Minister of Jammu and Kashmir, now no one can stop him Shri Shah said that Shri Narendra Modi has established democracy within Jammu and Kashmir and once democracy is established, normalcy will be restored.

Shri Amit Shah said that we all had a dream that Shyama Prasad Mookerji’s dream should be achieved and we saw in our lifetime what he sacrificed for. It is because of Shri Narendra Modi that we have been able to see that day and today the dream of Shyama Prasad Mookerji is being fulfilled. He said that the people of Jammu are standing together like a rock with the process of development started by Shri Narendra Modi. The Union Home Minister said  no one can stop the era of development that has begun in Jammu and Kashmir. He said hegives an assurance that this government will never allow those who disturb the peace of Jammu and Kashmir to succeed.