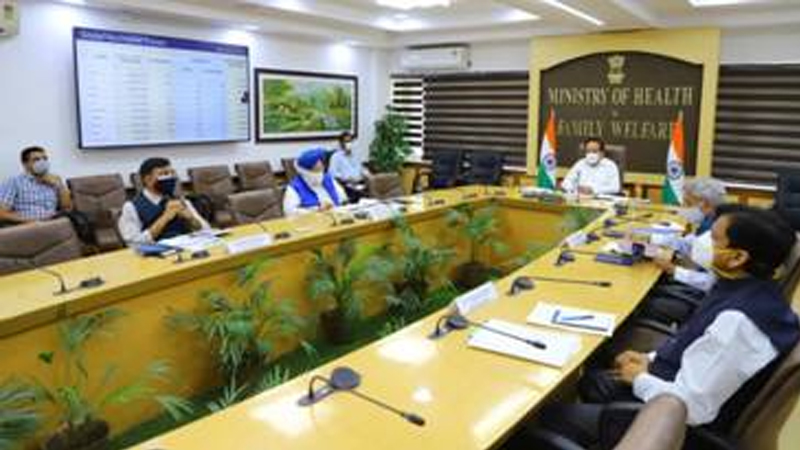 At the outset, Dr Harsh Vardhan apprised other members of GOM about the steadily growing trajectory of daily recoveries. There are more than 3 lakh recoveries in the last 24 hours, he stated. He also observed that “180 districts have showed no fresh cases in the last 7 days, 18 districts in 14 days, 54 districts in 21 days and 32 districts were bereft of any fresh cases in the last 28 days.”The number of critical cases thus far includes 4,88,861 patients who required ICU beds, 1,70,841 patients who required ventilator support  and 9,02,291 patients who were given oxygen support, he added. As on date, 1.34% of the active caseload is in ICU, 0.39% of them are on ventilators and 3.70% of them are on oxygen support.

Dr Harsh Vardhan informed the GOM that, “the cumulative number of COVID19 vaccine doses administered in the country has crossed 16.73 Cr today which includes nearly 23 lakh doses given yesterday. A total of 17,49,57,770 doses have been delivered to the states, out of which 16,65,49,583 doses have been consumed and 84,08,187 doses are still available with the states. He further added that a total of 53,25,000 doses are on the pipeline and will be supplied to the states soon.

Reiterating the importance of full protection through two COVID Vaccine doses, he again appealed to all citizens to get the second dose which boosts the immunity against COVID manifold. He requested the States to set aside 70% of the vaccines received through GoI channel for administration of the second dose.

On the tests being conducted in India, the Union Health Minister noted that the country has reached a testing capacity of 25,00,000 tests per day. He informed that a total of 30,60,18,044 tests have been conducted so far in India, which includes 18,08,344 tests in the last 24 hours. From just one lab at NIV Pune, the country is presently served by 2,514 labs.

Dr Sujeet Kumar Singh, Director, National Centre for Disease Control (NCDC) highlighted the COVID trajectory of India vis-a-vis that of other countries. He underscored the need and importance of significantly ramping up testing and hospital infrastructure in Tier-II/III cities in view of the surge in cases which has seen a shift to these regions/areas too.

The districts/metropolis of Bengaluru (Urban), Ganjam, Pune, Delhi, Nagpur, Mumbai, Ernakulam, Lucknow, Kozhikode (Calicut), Thane, Nashik, Malappuram, Thrissur, Jaipur, Gurgaon, Chennai, Thiruvananthapuram, Chandrapur, Kolkata, Palakkad are the top 20 contributors of Active Cases in the country.Emphasis on timely provision of clinical care in high transmission areas to reduce morbidity and mortality, advance preparedness in anticipation of rise in cases, increase in testing using RAT and tracing of those who might have contracted the infection, emphasis on clinic-epidemiological linkage of genomic surveillance with transmission dynamics, clinical severity and age profile of new cases were highlighted as important steps ahead.

Dr V K Paul, as Chairman gave a detailed report on the work of the Empowered Group-1. He highlighted the various efforts made towards ramping of hospital infrastructure for effective clinical management of hospitalized patients. Urgent steps to halt transmission by intensified containment through community-led effort and restrictions, improvement of messaging breadth and reach to curb panic and free flow of misinformation, promotion of home care in Covid and demystification of treatment to reduce load on hospitals, rational use of Remdesivir, Oxygen and other drugs, the augmentation of railway coaches as isolation beds, enhanced focus on rural COVID care were presented. The progress on epidemiological evidence, new technical advisories for dynamic guidance and hand holding of states/UTs etc., through various stakeholders was also enumerated.

Shri GiridharAramane, Secretary, Ministry of Road, Transport & Highways (Chair, EG-2) presented the current scenario of Liquid Medical Oxygen Production, Allocation and Supply. He stated that the production of Liquid Medical Oxygen (LMO) has been maximized to meet the present demand of COVID patients. The domestic production has increased to more than 9400 MT/day, he stated. Steps to import LMO, status of establishment of PSA oxygen plants through support of PMCARES fund with the support of DRDO and CSIR, enhancement of tanker availability, the functioning of the web portal & mobile application for Real Time Tracking of LMO Tankers, were also enumerated by him.