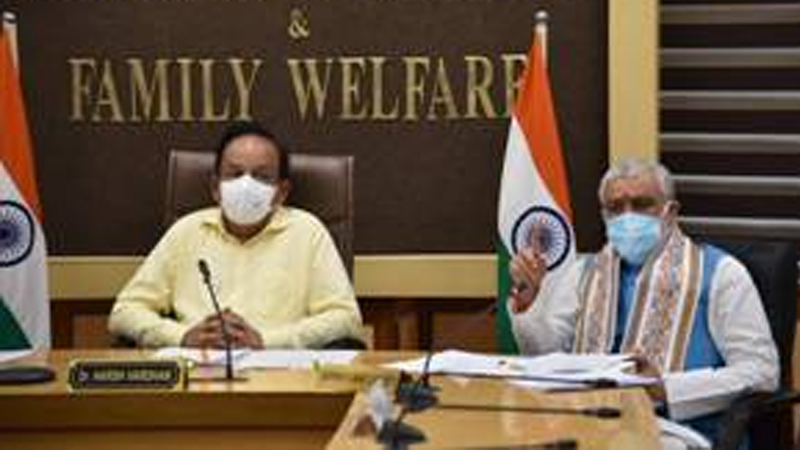 The main focus of the meeting was geared towards the elimination of Malaria from Delhi by the year 2022. Dr. Harsh Vardhan emphasized on the need to make Malaria a notifiable disease so that each and every case of Malaria could be tracked and treated and the transmission foci could be identified. This issue was taken up with the UT govt. last year also, he stated.

Reminding everyone that Delhi is a Category 1 State for Malaria elimination, Dr. Harsh Vardhan said, “Delhi had originally planned to eliminate Malaria in 2020. The deadline has been now shifted to 2022.”

On the critical step of making Malaria notifiable in Delhi, he explained, “Capturing actual data from the Hospitals and taking preventive actions in the areas of infection is critical to achieve elimination. So is the regular reporting from the private sector essential for taking timely preventive measures and for accuracy of data pertaining to incidence of malaria. Further,as we move towards elimination, 10% of all fever cases need to be screened for malaria so that no cases of malaria can escape detection.” To encourage the administrators present, the Union Minister said, “India’s feat of achieving a reduction of 83.34% in Malaria morbidity and 92% in Malaria mortality between the year 2000 and 2019 has been acknowledged by WHO.”

The main component of VBD control programmebeing elimination and reduction in the risk of transmission and outbreak containment by stringent control of vector organisms, Dr. Harsh Vardhan said, “No effective drug or vaccine against Dengue & Chikungunya is available yet, so prevention is mainly focused on controlling of vector mosquito. Vector control like application of larvicides in breeding habitats can be carried out simultaneously with COVID19 activities. Precautions should be taken if fogging is undertaken, as COVID19 patients in Hospitals and quarantined at home or other places may experience breathing problem.”

He was apprised by the UT officers that the introduction of larvae eating fishes like Gambusia and Guppy have showed promising results. He advised the municipal authorities present to inspect buildings that are under construction to ensure that there is no breeding of vectors in these sites.

A planned preparation against vector borne diseases was elaborated upon:

·         Adequate quantity of test kits for diagnosis of Dengue, chikungunya and malaria cases are to be made available in all hospitals.

·         All the Hospitals are to prepare for ensuing transmission season with a contingency plan for Dengue. Regular testing of samples needs to be ensured for early warning signal.

·         Blood banks need to be alerted to be ready with adequate blood components.

·         Sensitization of the clinicians and laboratories on VBDs is also to be undertaken.

·         Logistics for vector control including equipment and insecticides are to be ensured at all levels.

Dr. Harsh Vardhan stressed on community empowerment for their pro-active and effective contribution in vector control activitiesso that timely and appropriate action can be taken. The Union Minister highlighted that prevention and control of VBDs necessitates an effective inter-sectoral approach, requiring close collaboration and partnerships between the health and non-health sectors (both government and private), non-governmental organizations (NGOs) and local communities. He invited partners organisations to work in a coordinated way to prevent Dengue, chikungunya and malaria amidst COVID19, in order to prevent mortality and morbidity.

Shri Ashwini Kumar Choubey said, “Since the elimination of breeding spots for vector constitutes the pillar of Public Health response to VBDs, greater focus should be on community engagement through multi-media IEC campaigns.” He added that making Delhi Malaria free would put another feather on the cap of the country.

Shri Anil Baijalalso informed about the important efforts being put by the administration to stop VBDs: “We can’t afford to have an outbreak of Malaria, Dengue or Chikungunya during COVID times. The three Municipal Corporations have been onboarded who are to spearhead the action on controlling the vector in their localities. Since a major success was achieved in the past through educating children who conveyed vector control information to their parents, the Education Department has been instructed to include this IEC topic in their online education.”

Sh. Vikram Dev Dutt, Principal Secretary (H&FW), NCT of Delhi along with the Commissioners and Medical Health Officers of North, South and East Municipal Corporations,The District Magistrates, Deputy Superintendents of Police of all of Delhi’s districts and Heads/Medical Superintendents of Delhi Hospitals dedicated to VBDs attended the event.