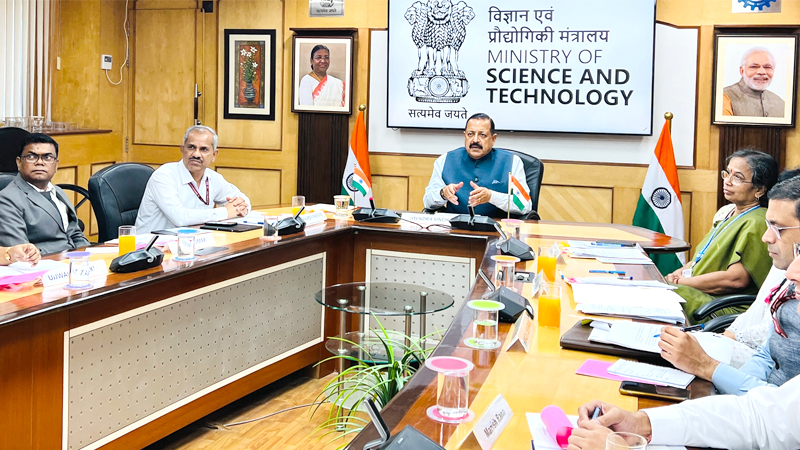 In his opening remarks, he said that Brazil, Russia, India, China, and South Africa (BRICS) countries face many similar challenges such as ensuring food, affordable healthcare and energy access for its people, and addressing environmental problems like climate change, biodiversity loss etc.

The Minister also underlined the importance of Science, Technology & Innovation (STI) in bringing together our researchers to tackle new and emerging challenges.

Dr Jitendra Singh said, in order to resolve these challenges, it is imperative for us to join hands to innovate affordable scientific solutions. He pointed out that there are several areas where the lives of our people are directly benefited from our mutual cooperation like the establishment of a vaccine R&D centre, BRICS Network University, establishment of shared satellite constellation, mutual recognition of pharma products, etc.

Dr Jitendra Singh said, India would support BRICS efforts in developing innovative and inclusive solutions, including digital and technological tools to promote sustainable development and facilitate affordable and equitable access to global public goods for all. The Minister pointed out that in time to come, BRICS shall hold global importance for being the most populated marketplace, driven by the knowledge economy and underlined that BRICS countries can collaborate to develop joint S&T solutions suited to local economies.

Referring to India’s efforts and march in STI area, Dr Jitendra Singh said, Prime Minister Mr. Narendra Modi has always emphasized that ultimate aim of all scientific endeavour is to bring “Ease of Living” for common man; and a “science-based development”. He said, India is moving along the mantra of ‘Jai Jawan, Jai Kisan, Jai Vigyan, and Jai Anusandhan,’ which essentially believes in coordination of various sectors to make India a global centre of research and innovation.

Dr Jitendra Singh said, in the last eight years, Government R&D expenditure has almost doubled. In this year’s budget, Rupees 14,800 Crore has been allocated for Ministry of Science and Technology. A budget of ₹5,000 crore has been allocated for the creation of a National Research Foundation (NRF). He said, as a result of increased investment, India has reached 3rd position in scientific publication as per NSF database and the country has featured within the top 50 innovative economies globally (at 46th rank), as per Global Innovation Index (GII). It has also reached 3rd Position in terms of number of PhDs, in size of Higher Education System; as well as in terms of number of Start-ups, the Minister added.

Dr Jitendra Singh said, Artificial Intelligence (AI) is poised to disrupt our world and India, being the fastest growing economy with the second largest population in the world, has a significant stake in the AI revolution. Recognizing this, we have established 25 Technology Innovation Hubs (TIHs) in the country. International collaboration is embedded in it and we welcome researchers from foreign countries for collaborative research and sharing of knowhow, the Minister emphasised.

He said, “The BRICS Innovation Action Plan 2022-23” adopted would help sharing best practices and networking among BRICS Innovation ecosystem and innovation actors. India looks forward to deepen the BRICS collaboration in the field of Science, Technology and Innovation.