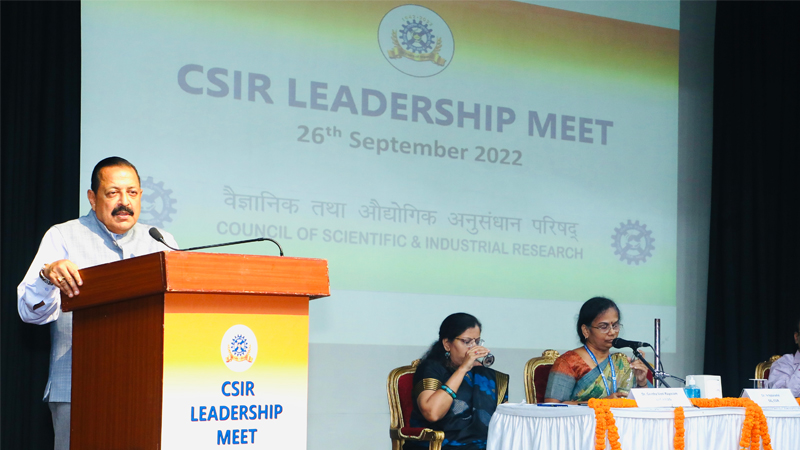 Addressing the first-ever CSIR Leadership Meet attended by the Directors and Head of Departments of all the 37 CSIR labs across the country, Dr Jitendra Singh said, the legacy of CSIR is built on the cumulative contribution of its several national laboratories and institutes. He said, each laboratory of CSIR is unique and specialising in as diverse areas as genomics to geology, material technology to microbial technology and food to fuel.

The Minister also recalled how the laboratories came together during the COVID pandemic last year and developed several technologies that helped India’s fight against COVID. The Minister said, the success stories of each lab must be brought to the fore of the country through a massive mass media campaign.

Dr Jitendra Singh said, CSIR breakthroughs in areas like Drone, Heliborne technology, state of the art Sewage cleaning machines, Aroma Mission has opened up huge opportunities for developing meaningful and equal stake partnership among Research, Academia and Industry. The Minister said, the state-of-the-art Heli-borne survey technology with cooperation from Jal Shakti Ministry was applied last year in States of Rajasthan, Gujarat, Punjab and Haryana and this could play an important role in positively contributing to Prime Minister Narendra Modi’s Vision and Mission of “Har Ghar Nal Se Jal”. Similarly, the mechanized sewage cleaning system developed by CSIR for wider dissemination will help in achieving the target of Swachh Bharat Mission, he added. Under Prime Minister Narendra Modi’s leadership, said the Minister who is also Vice President CSIR, that Science & Technology has got enhanced budget and a very special impetus in the last 8 years and the scientific pursuits and endeavours are now being assigned special importance. He said, the ultimate goal of all Scientific Innovations is to bring “Ease of Living” for the common man.

Dr Jitendra Singh called upon a pool of over 4,500 CSIR scientists to reorient and revitalise the organization to emerge as Global Centres of Innovations in the Amrit Kaal. He said, they must focus on emerging innovations in areas like Hydrogen in the energy transition, Carbon capture and storage, Accessible solar power, Plastic recycling and Cheap energy storage.

Dr Jitendra Singh said that there should be a Science Pavilion on the lines of DST and DBT at Pragati Maidan. He also urged the DG, CSIR to organize CSIR-Expos in various parts of the country to showcase its technological prowess to various states and industries, besides other stakeholders.

In conclusion, Dr Jitendra Singh asked CSIR and all the science departments to explore S&T innovations needed in the next ten years to make India globally a frontline state in technological achievements and innovations. The Minister said, “We should not restrict our ambition to be the best in India but be the best in the world as India is blessed with the demographic dividend of youth and they can take up any challenge with the right training and motivation”.

DG, CSIR, Dr N. Kalaiselvi said in her welcome address that 21st century is going to be the century of India and for India. She said, Science and Technology fraternity must rise to the occasion and work hard to make India a respected name in the global arena.

CSIR will have a celebration of eight decades of its foundation soon with several commemorative activities and prizes to be announced.