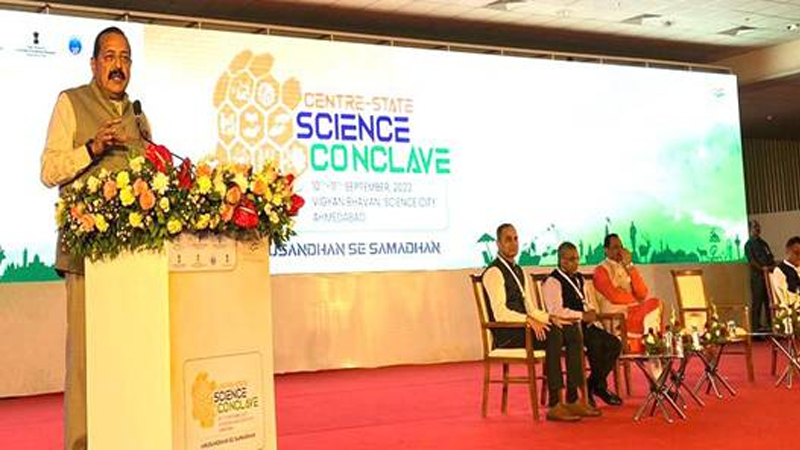 Presiding over the concluding session of the two-day “Centre-State Science Conclave” at Science City in Ahmedabad, Dr Jitendra Singh informed that a high level mechanism will be developed by the Department of Science and Technology to monitor and coordinate the follow up action of the conclave.

The Minister also asked the States to appoint a Nodal officer in each of the States to coordinate and cooperate with the Special Committee for knowing and sharing the best practices. Giving the example of heli-borne technology launched from Jodhpur, Rajasthan in October, 2021, Dr Jitendra Singh said, to start with, the States of Rajasthan, Gujarat, Punjab and Haryana were taken up for this latest heli-borne survey. The Minister pointed out that if the same technology is uploaded on Dashboard, other States may join and share this CSIR technology from source finding to water treatment and thus benefit millions of people across the country.

Dr Jitendra Singh expressed satisfaction that important plenary sessions with State S&T Ministers discussed in detail on issues like Agriculture, Innovation for producing portable drinking water including application of technologies like Desalination, Heli borne methods developed by DST, Clean Energy for All including S&T role in Hydrogen mission, Deep Sea Mission of MoES and its relevance for Coastal States/UT, Digital healthcare for All and Synergizing Science with National Education Policy.

A special session with the CEOs of over 100 Start-Ups and industry at the Centre-State Science Conclave’ in Ahmedabad came up with scientific solutions in the field of agriculture, drone, artificial intelligence, biotechnological solutions, single-use plastic alternates, irrigation and digital health amongst others. Many of the State governments have shown keen interest in some of the technologies and agreed to partner with some of the start-ups for State-specific technological solutions.