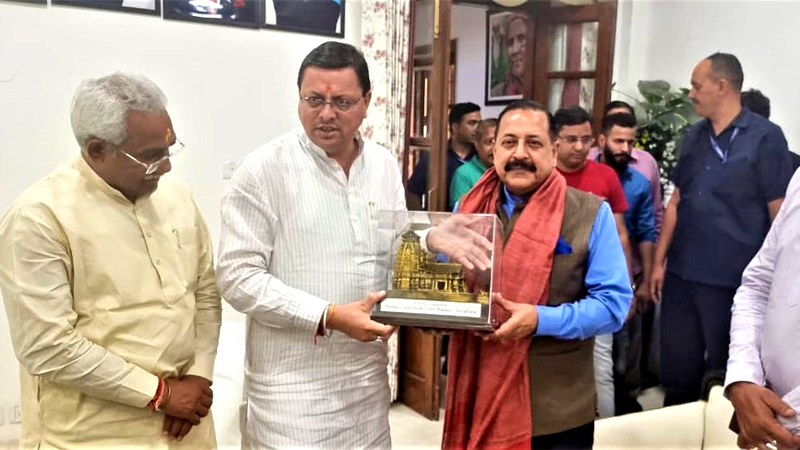 Before concluding his Uttarakhand visit, Union Minister of State (I/C) Science & Technology; Minister of State (I/C) Earth Sciences; MoS PMO, Personnel, Public Grievances, Pensions, Atomic Energy and Space, Dr Jitendra Singh had a meeting with Uttarakhand Chief Minister Pushkar Singh Dhami, during which, among others issues, he impressed upon the CM to promote Agri-tech StartUps, since Uttarakhand had a vast potential for it. He also updated Dhami about the Aroma Mission launched by CSIR in the Union Ministry of Science & Technology.

The two leaders also discussed implementation of various centrally funded schemes in the State & the current affairs related to the State. 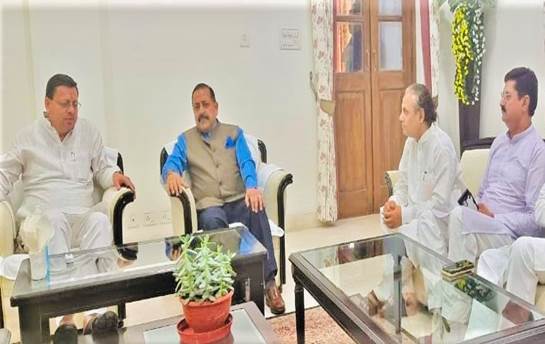 Dr Jitendra Singh urged Dhami to promote Agri-tech start-ups in the State to arrest the large-scale migration of youth and promised all help from the Ministry of Science and Technology.

The Union Minister said that the geography and climatic conditions in Himalayan states like Uttarakhand favour the cultivation of medicinal and aromatic plants and these can be developed into Agri-tech and aromatic enterprises. Referring to the huge success of CSIR supported Aroma Mission in Jammu and Kashmir, the Minister said, the same can be replicated in a big way in Devbhoomi.

The Chief Minister also proposed to the Union Science & Technology Minister setting up of new scientific institutions in the State and extending the services of the existing Indian Institute of Petroleum at Dehradun.

Dr Jitendra Singh offered support for providing free quality planting material and end-to-end technology package on cultivation, processing, value addition and marketing of the Lavender crop to the farmers. He said, CSIR will provide comprehensive handholding from product development to marketing to the willing youth and farmers. The Minister said, as large numbers and area is under small and marginal holdings, appreciable economic outcomes can be achieved by pooling resources for Aroma mission.

Dhami also discussed a wide range of State related issues ranging from development to placement of All India Services officers with the Union Minister. He brought to the notice of Dr Jitendra Singh, who is also Minister In-charge Department of Personnel & Training (DoP&T), some of the issues related to deputation and placement of IAS officers in Uttarakhand. In response, Dr Jitendra Singh said, he will ask the Department to give due consideration to all these issues and examine what best can be done.

The Chief Minister also requested the Union Minister to follow up with the Central Government the progress of some of the other proposals of projects in Uttarakhand. The Union Minister in return said that his office will take due cognizance of this.