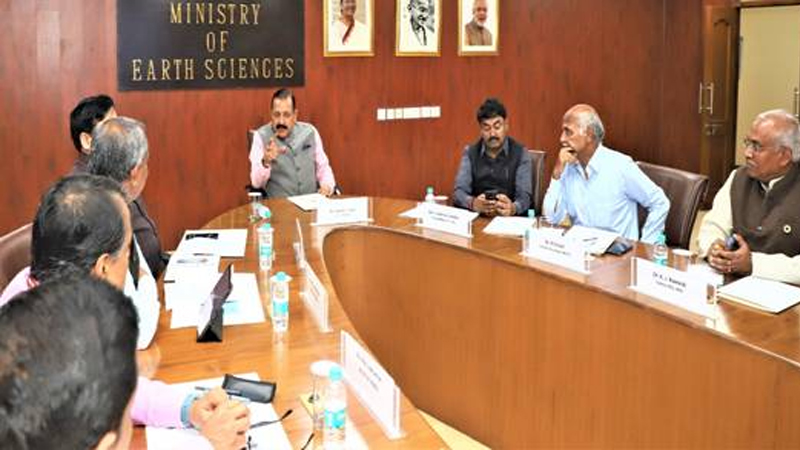 Dr Jitendra Singh said that the move is in tune with Prime Minister Narendra Modi’s directive to avoid duplication and working in silos and to aim for greater integration to achieve the maximum output. He said, PM Modi not only has a natural predilection for science but is also forthcoming in supporting and promoting science and technology based initiatives and projects in the last 7-8 years.

Dr Jitendra Singh said, Ministry of Earth Sciences has taken the notion of “Marine Surveillance” to a new level, where Space applications are also being deployed to share the valuable inputs with the Security Agencies. The Minister informed that Oceansat will be launched on 26th of November, 2022 and installation of a NASA-ISRO Radar System is at an advanced stage. He also informed greater use of Global Navigation Satellite System, GNSS, as one of the key sources of position information, alongside radio navigation systems, which exchange information with nearby ships and land-based vessel traffic services (VTS) on a vessel’s position, course and speed. Taking a review of the Design and Development of Manned Submersible – MATSYA 6000, Dr Jitendra Singh said, completion of all testing to proceed for shallow water testing of manned submersible during the first quarter of 2024 using the NIOT-MoES research vessel ORV Sagar Nidhi. He informed that based on the ongoing progress, it is expected that all the long lead components shall get realised by the third quarter of 2023 to proceed for the subcomponent integration and testing by following due DNV approved interface procedures.

Dr Jitendra Singh said, for the benefit of ocean scientific community, under the Deep Ocean Mission’s SAMUDRAYAAN program of Ministry of Earth Sciences (MoES), the deep-water human submersible MATSYA6000 is designed and developed indigenously by National Institute of Ocean Technology, an autonomous institute under MoES. The battery-powered submersible MATSYA 6000 shall have the capability to carry three persons upto 6000 m water depth and perform scientific exploration with a normal endurance period of 12h and emergency support for 96 hours. Manned submersible have the advantages of carrying scientists to deep sea areas for research on life in extreme environments by biological sampling, habitat analysis and in situ experiments for ocean mineral exploration.

Secretary, MoES, Dr M Ravichandra said that considering the complexity in the depth rated component custom design, realisation and testing of other subsystems; contract were signed for the long lead items with national and international agencies for the subcomponents realization. Titanium Alloy personnel sphere for 6000 m operation capability is under progress with VSSC-ISRO. A design document is submitted to DNV for approval and ingot material processing is being carried out at MIDHANI and forging is planned at L&T. Electron Beam Welding facility augmentation is being completed at LPSC-ISRO.