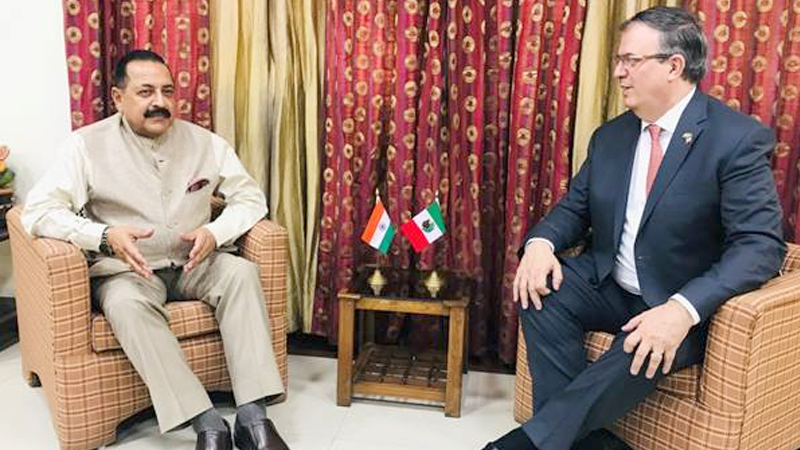 “A number of joint projects have been implemented between the two countries in different fields of science & technology to foster collaborative research. This has helped expand networking between scientific communities of both the countries,” Dr. Jitendra Singh said at the meeting today. He noted that “The Programme of Cooperation (PoC) has been renewed by both countries from time to time, and they have agreed to make a new call for joint proposals in different areas of science & technology. India is interested in renewing PoC further with a special focus on working in the areas of Health; Human Security; and Energy in the coming years”.

Dr Jitendra Singh pointed out that the COVID 19 pandemic presented a good opportunity for India to showcase to the World its potential to provide affordable healthcare. He said it highlighted the need to work together on specific areas like health with a special focus on vaccines and underlined the need to take this area of cooperation forward, together.

The Union Minister said that the Prime Minister Narendra Modi gives high priority to scientific innovation and he highlights scientific projects in each of his speeches, like marine science, climate change and bio-fuels among others. Terming India and Mexico as ‘Privileged Partners’, Dr. Singh said that the two countries can compliment and supplement each other in many areas and we are on right course.

Minister of Foreign Affairs, Government of Mexico, Marcelo Ebrard emphasized on the need to strengthen the collaborations that existed between the countries since 1975 and work together so that new areas of collaboration in S&T can pick up momentum with an accelerated mechanism in place.

H. E. Federico Salas, Ambassador of Mexico to India, underscored that both the countries have several National Institutions of importance working together, and the scope of such collaborations needs to increase for the benefit of both countries.

Secretary, Department of Science and Technology, Dr. S Chandrasekhar stressed on the need to work together on making pharma products greener and strengthening existing areas of cooperation, while Secretary, Ministry of Earth Sciences, Dr. M Ravichandran pointed out possible cooperation in the deep ocean mission.

Secretary, Department of Biotechnology, Shri Rajesh S Gokhle underlined the need to partner on vaccine development and other areas of health. Director General, Council for Scientific and Industrial Research, Dr. Shekhar Mande highlighted collaboration possibilities in biofuels, carbon neutrality, and in the chemical sector. Dr. Mande, in a separate meeting earlier with Mexican delegation, said that CSIR is India’s premier R&D organization with 37 research laboratories spread across the country with expertise in diverse S&T disciplines and it has been instrumental towards building India-Mexico relationship and would like to continue strengthening research linkages with our peers in Mexico.

The meeting was attended by Secretaries of M/o Science & Technology, M/o Earth Sciences, D/o Biotechnology, DG, CSIR, senior officials of various science departments, officials from Ministry of External Affairs and Office of Principal Scientific Advisor to the Government of India.