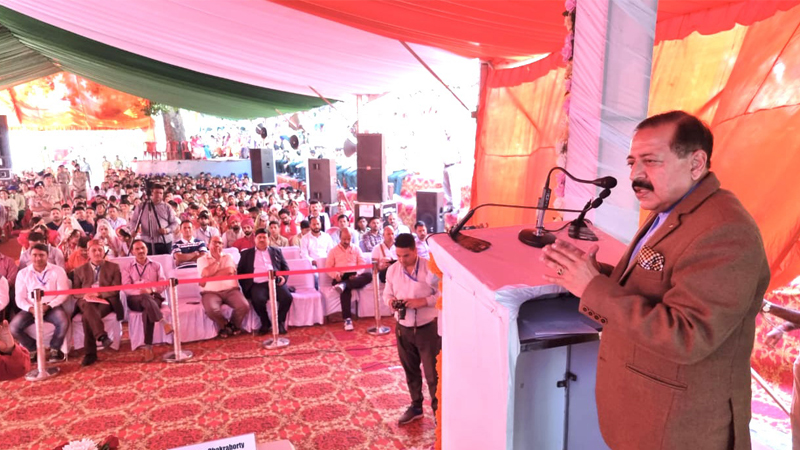 Linking it to Start-Ups, Dr Jitendra Singh said, the state-of-art institution in this hilly region will inspire young children to discover their potentials and use their innovative skills to find a source of livelihood in later life.

Dr Jitendra Singh said that Himachal being a Himalayan State with rich biodiversity is most suitable for promotion of Agri-tech Start-ups and the Department of Biotechnology is willing to hand-hold the young innovators to take a plunge in the ongoing start-up boom in the country. He said, the geography and climatic conditions in Himalayan states like Himachal Pradesh favour the cultivation of medicinal and aromatic plants and these can be developed into Agri-tech and aromatic enterprises. The Minister offered Chief Minister Jairam Thakur all help to study and implement CSIR supported Aroma Mission in Jammu and Kashmir, which can be replicated in a big way in Himachal.

The Minister was happy to note that Chamba has been ranked second in Health and Nutrition in March 2019, ranked among best districts in basic infrastructure in November 2020 and overall second in October 2021 in the country among the 117 districts identified across the country by NITI Aayog. He added that Aspirational District concept is based on objective parameters and it is scientifically designed with evaluation based on certain essential indices. Dr Jitendra Singh told the gathering thay aligning with the vision of Prime Minister to make Science & Technology reach every nook and corner of the country, Ministry of Science and Technology, Government of India has taken an initiative to install 75 science museums in different Aspirational districts of the country. He said, the purpose of these science museums is not only to apprise the scientific journey and achievements of India in the last 75 years of Independent India but also to infuse scientific temper among the school children.

Dr Jitendra Singh once again underlined that this initiative will lead to science-based, rational and progressive thinking among the students so that they are encouraged to take science as a career and spread scientific vision in the society, besides giving shape to critical thinking in the form of lucrative start-up ventures.

Dr Jitendra Singh said, the establishment of these science museums should not only cherish the rich scientific heritage of our country but also emerge as crucibles of innovation and invoke curiosity and enthusiasm in the students and the youth. He said, the establishment of science museums in the aspirational districts will also effectively contribute to the “Jan Bhagidari” and Samgra Shiksha Abhiyan of Government of India.

Dr Jitendra Singh was informed that Chamba district has marked progress in various indicators and the NITI Aayog has approved various projects for Chamba district as an incentive on the basis of better performance in delta ranking. Chamba last year became the 100th Har Ghar Jal District. The Ministry of Jal Shakti said, Chamba is the fifth aspirational district to become Har Ghar Jal. The Minister also shown keen interest in the “Chalo Chamba” campaign launched in 2021 with the aim of highlighting the immense tourism potential of the district, showcasing the unexplored destinations, as well as turning this into a provider of employment.

In his address, Chief Minister Jairam Thakur profusely thanked Prime Minister Narendra Modi and Dr Jitendra Singh for granting Science Museum to the Aspirational District of Chamba and said it will go a long way in inculcating scientific spirit and approach among the students of this district and also the adjoining areas. Shri Thakur said, in the last 8 years, several developmental projects were sanctioned for Himachal Pradesh to make it at par with other developed states of the country. He particularly mentioned about Shri Modi laying the foundation stone of the Medical Device Park at Nalagarh, at a cost of about Rs 350 crore on 5th October, 2022, which will significantly enhance employment opportunities in the region.

The Government is committed to raising the living standards of its citizens and ensuring inclusive growth for all – “Sabka Saath, Sabka Vikas, Sabka Vishwas, Sabka Prayas”. To enable utilization of their potential, the Aspirational Districts programme closely focuses on improving people’s ability to participate fully in the burgeoning economy. Districts are encouraged to first catch up with the best district within their state, and subsequently aspire to become one of the best in the country, by competing with, and learning from others in the spirit of competitive & cooperative federalism. Chamba has shown exemplary progress in this regard across multiple parameters of development.