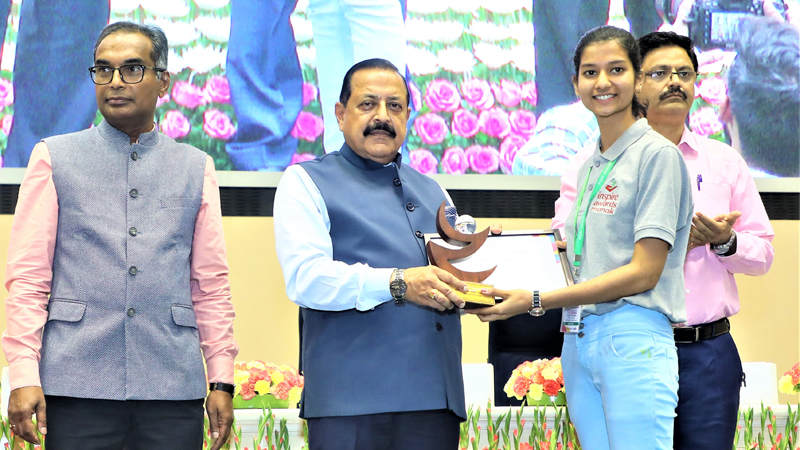 Union Minister of State (IC) Ministry of Science and Technology; Minister of State (IC) Ministry of Earth Science; MoS of Prime Minister’s Office and Ministry of Personnel, Public Grievances & Pensions Dr Jitendra Singh today presented INSPIRE awards to 60 Start-Ups and financial support to 53,021 students. The award is instituted by the Department of Science & Technology (DST), Govt of India, and these innovators will be extended complete incubation support for their entrepreneurship journey.

Dr Jitendra Singh said, during the year 2020-21, while the country like rest of the world was battling with the severe impact of COVID-19, the annual INSPIRE Awards – MANAK (Million Minds Augmenting National Aspiration and Knowledge) competition attracted an unprecedented 6.53 Lakh ideas and innovations from all States and UTs of the country. He said, the scheme touched an unparalleled level of inclusivity by representing ideas and innovations of 702 districts of the country (96%) including 123 out of 124 aspirational districts, 51% representation from girls, 84% participation from schools located in rural areas of the country and 71% of the schools run by the State / UT Governments.

Dr Jitendra Singh said, these 556 students who will be part of NLEPC, are the country’s most promising Scientists, Researchers, Scholars and an overall group of S&T talent in the making. He said, their innovations have a societal focus which gives India an opportunity to solve the problems by application of S&T. The Minister informed that dedicated mentoring workshops are organized at the top Technological Institutes of our country like the IIT’s, BITS, NIT’s etc for these students, which will not only raise their exposure level to the latest trends in Science, Technology and Innovation (STI) but also coach them to make right decisions for their innovative technologies and gain an insight into what is going to help their innovation most.

Dr Jitendra Singh said, every year, from all recognized eligible schools, amongst the school students of 10-15 years of age, studying in class VIth to Xth, a million ideas are aimed to be scouted and a lakh to be identified for further value addition and an opportunity to compete and move ahead on account of their inherent merit in their incubation trajectories.

Dr Jitendra Singh said, the awards jointly implemented by Department of Science and Technology (DST), Government of India and the National Innovation Foundation (NIF) – India is a flagship scheme of the Government of India for nurturing the ideas and innovations of school students and motivate them to pursue Science and a career in Research. The scheme aims to help build a critical human resource pool for strengthening, expanding the science and technology system and increase the research & development base on the same, the Minister added.

Secretary, DST Dr S. Chandrasekhar said, to ascertain their value proposition and to mentor students at each stage, a series of District Level Exhibition and Project Competition (DLEPC) for each District in the country, followed by a series of State Level Exhibition and Project Competition (SLEPC) for each State / UT are organized. Students get an opportunity to present their innovations, articulate the merit of their ideas and thoughts, build confidence, gain knowledge of Science and Technology like never before and finally, about a thousand students are aimed to be invited annually to participate in the NLEPC (National Level Exhibition and Project Competition). As an outcome of NLEPC, a total of 60 innovative ideas and innovations are desired to be identified, recognized and rewarded which will be extended a complete incubation support so that their entrepreneurship journey could also begin.