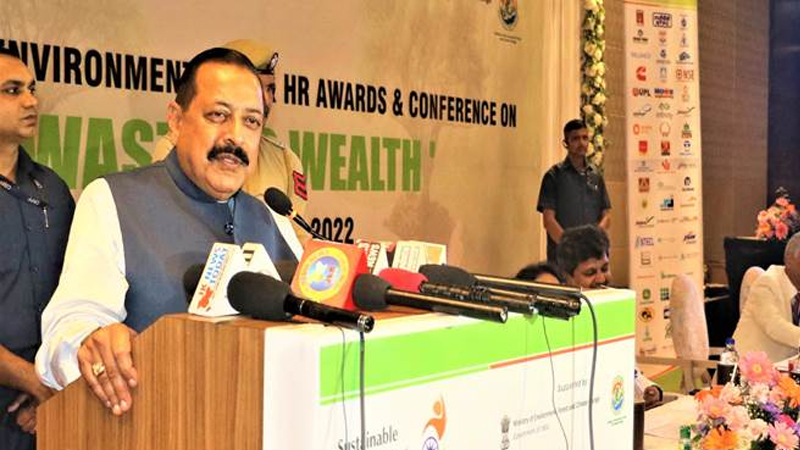 Union Minister Dr Jitendra Singh said in Jammu today that “Waste to Wealth” is emerging as a new avenue for StartUp in India.

The Minister was addressing National Seminar on “Waste to Wealth” organised under “Ek Kaam Desh ke Naam” programme, at which Industry leaders from all over India, from Kerala to Haryana and Gujarat to Odisha, were felicitated for having excelled in using latest technologies for waste to wealth conversion to generate business, livelihood and new opportunities for StartUps. The organising team was led by Delhi BJP Vice President Rajiv Babbar, a group of former senior retired bureaucrats, scientists and activists.

Dr Jitendra Singh reiterated Prime Minister Narendra Modi’s reference to Amrit Kaal and said next 25 years will see a sudden surge in India’s economy and this will happen through the utilisation of resources which have either remained unexplored in the past or which could not be utilised because of the lack of technology to re-use the waste products.

Referring to PM Modi’s call for “Swachhta” in his Independence Day address and also Modi’s leading role in all the international movements related to climate concerns, Dr Jitendra Singh said, waste to wealth methodology serves the dual purpose of not only keeping the environment clean but also creating wealth out of elements which otherwise pollute the environment. He made an interesting disclosure during the Swachhata campaign held in October last year to commemorate the Gandhi Jayanti, the cleaning of Govt of India offices in New Delhi and subsequent disposal of electronic scrap from discarded mobile phones, computers, etc. had generated revenue of over Rs.62 crores when it was taken to the market.

Dr Jitendra Singh said, there is need to create awareness about several waste products which can generate income without much effort and in this regard he referred to the use of cooked oil from the kitchen which could be sold off at the rate of around Rs.20 per litre to the industry which had the technology to convert it into alternative fuel. Similarly, he referred to Fly Ash produced through combustion of coal which could be utilised for making bricks for construction etc. All these, he said, were new resources of livelihood, simply through optimum utilisation of waste products.

Dr Jitendra Singh emphasised close integration of industry with scientific research in order to ensure sustainable StartUps. He lauded the efforts made through this programme today in which representatives of industry as well as senior scientists from CSIR, Ministry of Science & Technology as well as young students and potential StratUps participated.