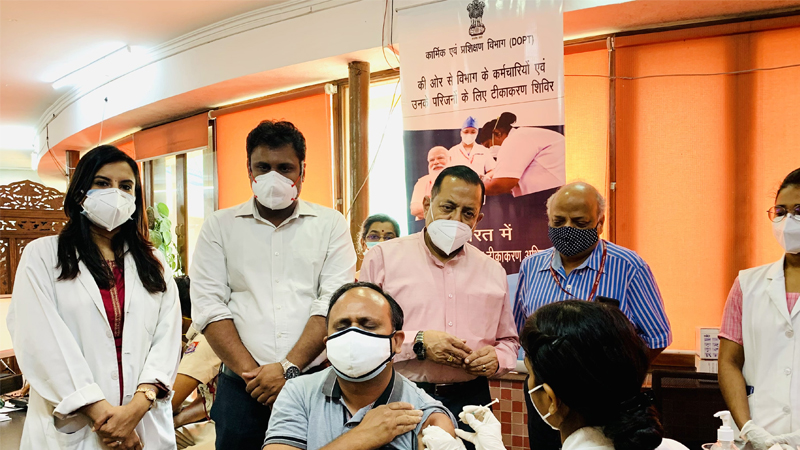 While making an appeal to all the eligible family members to get the jab at the earliest, the Minister said, the exclusive camp has been set up for the convenience of the DoPT officials, so that they feel encouraged to get inoculated at the earliest without wasting time. He said, the camp here will also provide an added convenience for those of the employees who are regularly coming to North Block to attend their offices in DoPT and will feel at home to have this facility provided in the familiar environs. He lauded the role of DoPT for its contribution in this noble mission.

Dr Jitendra Singh further informed that other Ministries/Departments of Government of India have also been advised to set up similar vaccination camps in their premises for the convenience of their employees and their families. He expressed satisfaction over the enthusiasm and compliance with which employees and their families are availing the facility and thus contributing to one of the fastest vaccination drives in India under the leadership of Prime Minister Narendra Modi.

The Minister noted that more than 26 crore have got vaccinated in India till date. This, he said, not only makes it the world’s fastest vaccination drive but also makes it distinct because of the smooth manner in which it has proceeded despite the heterogeneous character of the country and a huge population of 135 crore.

Lauding the vision and pre-emptive decisions taken by Prime Minister Narendra Modi, Dr Jitendra Singh said, India has performed better in managing the pandemic compared to many other smaller countries of Europe with much lesser population.  He said, various preventive measures were taken to contain the second wave of the pandemic and Vaccination is the mainstay of this strategy. He said the concept of “vaccination at workplace” has emerged as a successful model and urged the States/UTs to emulate the same.
Earlier, on the 4th of this month, Dr Jitendra Singh monitored the special camp organized by the Department of Pensioners and Pensioners’ Welfare at Lok Nayak Bhawan. He once again renewed his appeal for speedy vaccination of all the eligible central government employees of the age of 18 years and above.