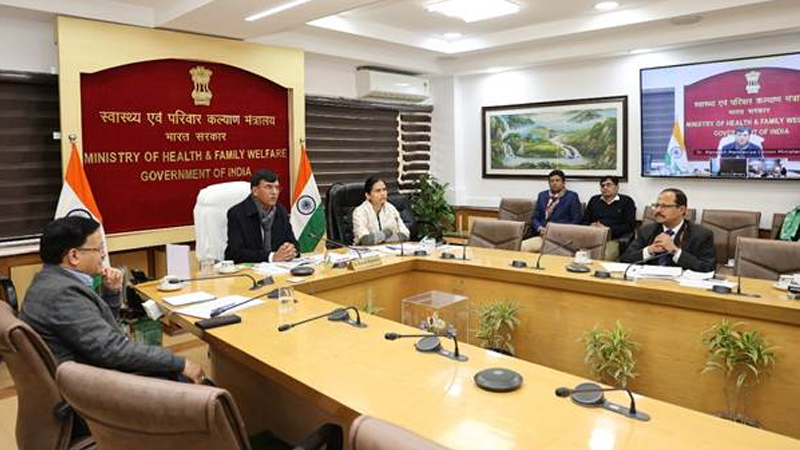 “India is committed to eliminating Kala Azar from the country by 2023. 632 (99.8%) endemic blocks have already achieved elimination status (<1 case/10,000). Only one block (Littipara) of Pakur district, Jharkhand is in the endemic category (1.23 case/10,000 population). We are working holistically with the state government and other stakeholders to achieve elimination in Jharkhand”. This was stated by Union Minister of Health and Family Welfare, Dr. Mansukh Mandaviya as he chaired a high level meeting to review the status of Kala-Azar disease in the four endemic states of Bihar, Uttar Pradesh, Jharkhand and West Bengal in the presence of Union Minister of State for Health and Family Welfare, Dr. Bharati Pravin Pawar. Shri Tejaswi Yadav, Deputy Chief Minister & Health Minister (Bihar), Shri Brajesh Pathak, Deputy Chief Minister & Health Minister (Uttar Pradesh) and Shri Banna Gupta, Health Minister (Jharkhand), and senior officers from West Bengal were present at the review meeting.

Dr. Mansukh Mandaviya appreciated the efforts of the State Governments towards meeting elimination target. He said that “under the visionary leadership of our Prime Minister, it remains our target to ensure health for all of our citizens.” Government has taken several steps towards elimination of Kala-Azar by 2023. From interventions like pucca houses through Pradhan Mantri Awas Yojana (PMAY), rural electrification, timely testing, treatment, periodic high-level review, to incentivizing through award distribution for states/districts/blocks, government along with its stakeholders are ensuring a robust ecosystem for early detection of the disease and its timely treatment.” Government of India is supporting the states in active case detection, surveillance, treatment, supply of diagnostic kits, medicines, sprays etc.

Dr. Mandaviya said that “While it is commendable that the endemic states are implementing targeted interventions, and some states have eliminated the disease in their districts, it is equally important to sustain the gain and work towards ensuring that the cases stay below 1 case/10,000 population”.   He urged the endemic states to ensure that there is a regular review and micro-stratification in high-risk blocks reporting incidence > 0.5 per 10000 populations. “Since Kala-azar impacts those among the lower socio-economic strata of society, early diagnosis & complete case management, integrated control and surveillance along with capacity building of human resource must be taken up on ground level”, he suggested. “For spreading public awareness, information regarding messages on prolonged fever, associated symptoms and free access to diagnosis and treatment and compensations/incentives, other government interventions are required to be widely disseminated through various mediums”, he further added.

Dr. Bharati Pravin Pawar, MoS (HFW) commended the states on their efforts and urged them to ensure that “Transmission through the notorious sandfly be prevented at any cost. Awareness campaigns regarding the symptoms, early detection and treatment available free of charge at Government health facilities are required to be strengthened for enabling early reporting by the affected persons”.

States informed about the status of disease in their respective states and shared their best practices too. The State Health Ministers expressed gratitude for the support provided by the Centre for detection, surveillance, treatment through various interventions. Health Ministers of states where elimination status is achieved assured to continue working in Mission mode to ensure that the stats is sustained.

About 90% of global cases of kala Azar were reported from eight countries: Brazil, Eritrea, Ethiopia, India, Kenya, Somalia, South Sudan and Sudan in 2021, with India contributing 11.5% of total cases reported globally. Kala-azar is endemic in 633 blocks of 54 districts in four endemic states of Bihar, Jharkhand, Uttar Pradesh and West Bengal. It is a notifiable disease in these states. Currently more than 90% of the Kala-azar cases are contributed by Bihar and Jharkhand. Uttar Pradesh (2019) and West Bengal (2017) states have achieved their elimination targets at the block level.