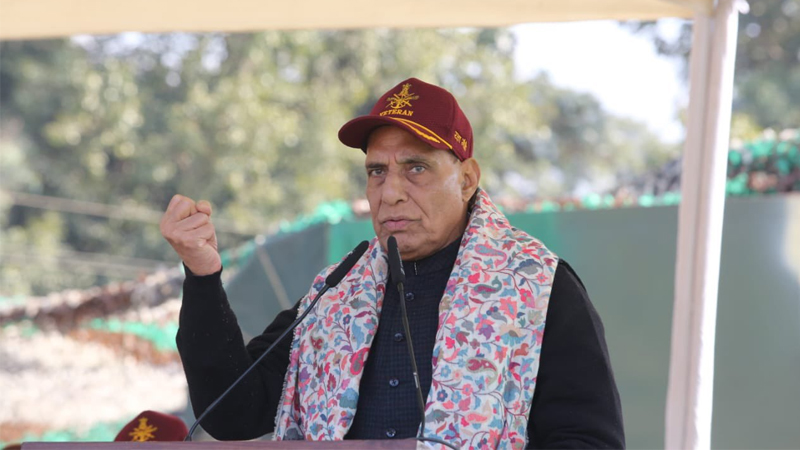 As a mark of respect to the selfless duty of the ex-servicemen & their sacrifices towards the Nation and solidarity towards Next of Kin of the bravehearts, the seventh Armed Forces Veterans’ Day was celebrated across the country on January 14, 2023. The celebrations were held at nine locations, with Raksha Mantri Shri Rajnath Singh presiding over the main function in Dehradun. Addressing a huge rally of veterans as part of the event, the Raksha Mantri expressed gratitude to the soldiers who have protected the sovereignty, unity and integrity of the country with unmatched courage & sacrifice and paid rich tributes to those who laid down their lives in the line of duty. He commended the serving as well as retired Armed Forces personnel who ensure the country’s national security.

Shri Rajnath Singh made special mention of the freedom fighters, soldiers and veterans of Uttarakhand, who have displayed indomitable courage and dedication to safeguard national interests. “Heroes like Veer Chandra Singh Garhwali ji who supported the freedom fighters hailed from Uttarakhand. During the Kargil war, the soldiers of the state played a crucial role by standing strong against the enemy and protecting the country with unshakeable spirit,” he said.

The Raksha Mantri added that due to the selfless devotion and sacrifices of the Armed Forces personnel, our citizens feel safe and walk with their heads held high. “Our brave soldiers have made a huge contribution in transforming India’s image across the world to that of a powerful and respectful nation. You all are the protectors of our unity and integrity. You are the assets to the nation. We sleep peacefully because you are awake at the borders,” he said.

Shri Rajnath Singh was of the view that pension, medical and other facilities being provided to the veterans are just a small token of the country’s respect towards the sacrifices & commitment they have made, assuring them of the Government’s full support to their welfare. “Every soldier of today is a respected veteran of tomorrow. It is our duty to ensure their well-being and satisfaction,” he said.

Reiterating the Government’s commitment to ensure the welfare of the ex-servicemen, the Raksha Mantri shed light on the launch of a Defence Pension Grievance Redressal portal for speedy resolution of complaints of the ex-servicemen. He also mentioned the ‘Maa Bharati ke Sapoot’ website, launched in October last year, stating that people can contribute to the Armed Forces Battle Casualties Welfare Fund through the portal. He termed it as an important medium to connect the citizens with the welfare efforts of ex-servicemen. He concluded his address by thanking all veterans and serving Armed Forces personnel for their dedication and valour.

Multiple stalls were placed at Jaswant Ground during the rally. Shri Rajnath Singh interacted with the veterans and Veer Naris during his visit. He paid glowing tributes to the fallen soldiers, while commending their bravery and dedication. He voiced the Government’s commitment to provide support to the families and dependents of the brave soldiers.

Earlier, at a solemn wreath laying ceremony, the Raksha Mantri dedicated Shaurya Sthal in Dehradun Cantonment to the Armed Forces. Along with civil and military dignitaries as well as the veterans, Shri Rajnath Singh laid a wreath to honour the supreme sacrifice of brave Armed Forces personnel from Uttarakhand. Over 2,300 service personnel from Uttarakhand have laid down their lives in the line of duty. The Indian Army and Cantonment Board will be responsible for the complete management and maintenance of Shaurya Sthal and conduct of all activities and ceremonies.

The Raksha Mantri also launched the ‘Soul of Steel’ Alpine Challenge, an initiative to promote tourism in border areas. He launched a website for volunteers to sign up for various adventure activities under this joint initiative of the Indian Army and CLAW Global, a veterans’ organization. ‘Road to the End’, a 460-km long car rally was also flagged off by Shri Rajnath Singh as part of a joint expedition by Indian Army and CLAW. The rally will reach its destination in the Garhwal Himalayas near Niti Village in Chamoli district in the next three days.

The Veterans’ Day event at Chennai was presided over by Raksha Rajya Mantri Shri Ajay Bhatt. He interacted with a number of veterans present on the occasion.

The three Service Chiefs highlighted the important welfare measures undertaken by various welfare departments under the veterans vertical of the Armed Forces. They commended the selfless service rendered by the veterans in Nation Building. The event witnessed the release of SAMMAAN magazine, a yearly journal published by Directorate of Indian Army Veterans (DIAV) covering informative articles and various topics of interest to the veteran community. The Indian Air Force also released the VAYU SEMVEDNA magazine.

In the morning, as part of the celebrations, the Chief of Defence Staff, three Service Chiefs, CISC and some ex-servicemen laid wreaths and paid homage to the fallen heroes at the National War Memorial in New Delhi to mark the occasion.

Other locations where the celebrations were organised by the three Service Headquarters are Jhunjhunu, Jalandhar, Chandigarh, Panagarh, Bhubaneswar and Mumbai. During the events, veterans were felicitated for their invaluable contribution to national security and nation building. The ‘We for Veterans’ anthem, an ode to the ex-servicemen commemorating their valour and sacrifice, was also played during the events.

The Armed Forces Veterans’ Day is celebrated on 14th January every year, as on this day in 1953, the First Indian Commander-in-Chief of Indian Army Field Marshal KM Cariappa, who led the Indian forces to victory in the 1947 war, formally retired from the Service. The day is dedicated to the esteemed veterans of the country. The Veterans’ Day is being commemorated since 2017 to reaffirm the camaraderie between the retired, the serving and the nation and remember & honour the heroes who made the supreme sacrifice and selflessly served the nation.