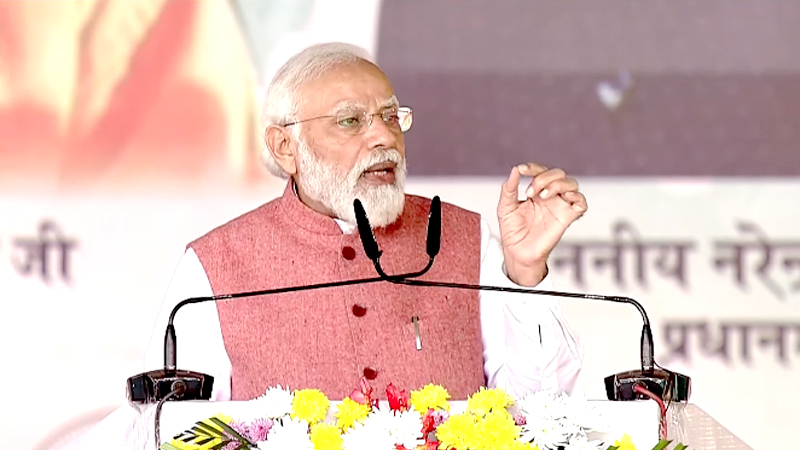 Addressing the gathering, the Prime Minister recalled the dedication of grand ‘Viswanath Dham’ at the feet of Mahadev yesterday in Kashi. He said, “the energy of Kashi is not only perennial, it also continues to take new dimensions”. He also bowed at the feet of Lord Krishna on the auspicious occasion of Gita Jayanti. “On this day when armies were face to face in the battlefield of Kurukshetra, humanity got the ultimate knowledge of Yoga, Spirituality and Paramarth. On this occasion, while bowing at the feet of Lord Krishna, I extend hearty greetings to all of you and the countrymen on the occasion of Gita Jayanti” said the Prime Minister.

The Prime Minister paid tributes to Sadguru Sadafaldeo ji. “I bow to his spiritual presence. I also express my gratitude to Shri Swatantradev Ji Maharaj and Shri Vigyandev Ji Maharaj, who are keeping this tradition alive, giving a new extension”, said the Prime Minister. The Prime Minister recalled his contribution to the freedom struggle and marvelled at India’s track record of providing saints in difficult times. “Our country is so wonderful that, whenever the time is unfavourable, some saint emerges here to change the current of time. It is India whose biggest hero of freedom is called Mahatma by the world”, he added.

The Prime Minister elaborated on the glory and importance of Kashi. He said cities like Banaras have preserved the seeds of India’s identity, of art, of entrepreneurship, even in the toughest of times. “Where there is a seed, the tree begins to expand from there. And that is why, today when we talk about the development of Banaras, it also forms the roadmap for the development of the whole of India”, he said.

The Prime Minister, who is on a two days visit to Kashi, went for an inspection of key development projects in the city late last night. He reiterated his continuous involvement in the development work being done in Banaras. “After 12 o’clock last night, as soon as I got the opportunity, I went out again to see the work that is going on in my Kashi, the work that has been done”, he said. He said that the beautification work that has been done in Gadolia locality has become a sight to behold. “I interacted with so many people there. I also saw Banaras railway station in Manduadih. This station has also been renovated. Embracing the novelty while retaining the old, Banaras is giving a new direction to the country” said the Prime Minister.

Recalling the Sadguru’s mantra of Swadeshi that he gave at the time of the freedom struggle, the Prime Minister said today, in the same spirit, the country has started the ”Aatmnirbhar Bharat Mission’’. “Today the local business, employment and products of the country are gaining new strength. local is going global” he added.

Going with the spirit of ‘Sabka Prayas’, in his address, the Prime Minister urged everyone to make some resolutions. He said these resolutions should be such in which the Sadhguru’s resolutions are fulfilled and in which the aspirations of the country are also included. These can be resolutions that should be given momentum and fulfilled collectively in the next two years. The first resolution, the Prime Minister urged, was about educating daughters and skill development among them. “Along with their families, those who can take responsibility in the society should also take the responsibility of skill development of one or two poor daughters”, he insisted. Another resolution, he said, can be about saving water. “We have to keep our rivers, Ganga ji and all our water sources clean”, the Prime Minister concluded.