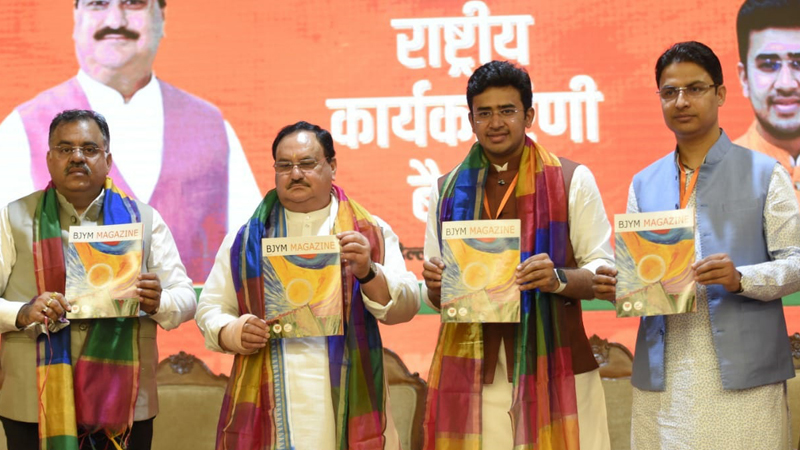 In the meeting held at NDMC Convention Centre, New Delhi all BJYM National Office Bearers, National Executive Committee Members, State Presidents and State General Secretaries were present. “The BJYM is the youth wing of the largest political Organisation of the world,” Surya said, commenting on the meeting. “The BJYM is today at the forefront of all important youth-centric political issues in the country, promoting the message of the BJP. The BJYM is consistently promoting the good work of the PM Sri Narendra Modi Government and working on increasing the foothold of the BJP in states which do not have a BJP government. India is on the right path with Sri Narendra Modi as the PM and the BJYM will stand by and aid the PM in achieving his vision of a New India.”

Addressing the National Executive Meeting, Shri JP Nadda, National President, Bharatiya Janata Party said that “Youth is an institution of change and a catalyst of hange”. Shri JP Nadda lauded the endless tasks undertaken by the Yuva Morcha karyakartas under the leadership of Shri Tejasvi Surya at grass-root level throughout India during the difficult times when the whole world was suffering from the Global Pandemic of Covid-19. While other political organisations went under isolation during the time of crisis, our Bjym workers were on streets helping people in the hour of crisis.

Shri Nadda emphasized on the acute importance of regular introspection by each karyakarta. He said that Bharatiya Janata Party is the only organisation in the country today which has rejected politics of caste, nepotism, appeasement and corruption. The policies and welfare schemes of central government reflect the concept of inclusive development for all section of the societies under the leadership of Hon,ble PM Shri Narender Modi ji. It becomes the duty of every Bjym karyakarta to ensure that each of these schemes are being implemented efficiently at the ground level.

Shri Nadda encouraged the youth members and asked them to understand the importance of staying politically and socially relevant. He said that working with ‘innovative thoughts’ and working for India’s growth should be our goal, while we prepare for the mission 2047. In BJP “Every leader is a worker and every worker is a leader’.  We do not order or dictate, rather we involve our karyakartas to work for the organisation and serve Bharatmata. We are determined to extend the benefit of numerous welfare schemes launched by PM Shri Narendra Modi led government and ensure last mile delivery.

BJP National General Secretary (Organization), Shri B. L. Santosh guided the youth karyakartas to work for the organisation and said that it is important for every karyakarta to believe in our ideology. We all are co-travellers on the path of our ideology. When there are carriers of ideology, there is no reason why our organisation’s ideology is left behind. We are witnessing record vaccination all over the country by Central Government which is itself a great achievement. He told that it is vital that we have actual youth in the Yuva Morcha unlike the other Political organisations. It will be your Karma, which will take you forward in the organisation.

Shri Tarun Chugh, National General Secretary and In-charge of BJYM, recalled his days when he himself was in Yuva Morcha and encouraged youth karyakartas to work in a positive direction to realise the vision of 2047. Digital Revolution will realise the dream of 2047, which we are drafting today at this national executive meeting. He said that every BJP worker is Nation’s chowkidaar.

In the first national executive committee meeting held under the leadership of Shri Tejasvi Surya, BJYM passed a political resolution on Digital Sovereignty. The resolution takes serious note of the data privacy, digital borders and the conflict between big-tech companies and sovereign laws of nation-states. Advancement in information technology and rise of big-tech i have far-reaching impact on the youth and social, economic, political and security aspects of the society. BJYM resolution made several suggestions to strengthen the efforts of the government to ensure Digital Sovereignty. It called for all multi-national companies (MNCs) in the technology sector to strictly comply with domestic laws in their entirety, without any exceptions. The companies must institutionalize all required processes and provisions as prescribed by the law of the land. It says that the foreign corporate terms of service cannot override fundamental rights of Indian citizens such as the right to freedom of expression and right to privacy as guaranteed by the Constitution of India. The adjudication of any dispute between a platform and Indian content creator must be exclusively the preserve of Indian institutions and courts. The community standards and moderation mechanisms for Indian users must be developed, adjudicated and controlled in India and be subject to Indian laws and Indian institutions. It calls for localisation of all the critical data and decision making in India. It strongly asserted that tech-companies cannot, under any circumstances, overrule or circumvent the digital sovereignty of the Republic of India.

The resolution also thanked the Honorable Prime Minister for leading the development of this public digital infrastructure and setting an example of digital governance for the world to follow. The BJYM congratulates the government for notifying these rules to enhance the overall accountability of the intermediary ecosystem by empowering the end user. The BJYM also congratulates the government for coming up with a robust Data Protection Law. The measures taken by the Prime Minister to achieve self-reliance in 5G network is commendable.

Ending decades of self-defeating & self-debilitating policies of Nehruvian Socialism & the Congress-License-Raj cronyism, PM Modi’s economic policies have revolutionised India’s economy. The approach of “minimum government & maximum governance” has accelerated growth in several sectors. The long-awaited reforms in our indirect tax regime were brought out through the Goods & Services Tax (GST) reforms which also uplift the spirit of cooperative federalism. With sky rocketing GST collections in spite of a pandemic, the fruits of the earlier decisions are now for the whole world to witness.

PM’s mantra of “Reform, Perform and Transform” is changing the way of doing business in India. For the first time, significant emphasis is being given to the youth of our nation. From Skill India, Start-up India, Fit India, National Education Policy, Atal Innovation Mission, Mudra & other schemes, the Government is ensuring that youth are given platforms & incentives in every field to contribute towards India’s development & their own growth, simultaneously.

Considering the above-mentioned economic reforms, the BJYM has made the following suggestions:

In 1947, India gained political independence & India is on the course of giving its citizens intellectual independence in 2022 with the conclusion of the 75th year of independence in the form of “Azaadi Ka Amri Mahotsav.” Celebrating the contributions of thousands of freedom fighters & revolutionaries from every section of society is essential & is a cause to be pursued against the biased & prejudiced versions of our history as propounded by a few historians in collusion with the earlier governments.

To further the vision of ‘Azaadi Ka Amrit Mahotsav’, and promote the ideal of Jan-Bhagidari among the youth, the BJYM has made the following suggestions:

Surya added that, “In order to become a global superpower, India’s youth must be ready to face challenges in every field, be it intellectual, technological, cultural or ideological. As empowered & well-read youth, it is our duty to spread the work of PM Sri Narendra Modi, learn & take inspiration from 20 years of his service in government administration. Today, as India is about to witness a civilisational renaissance, I promise that BJYM will lead this with all might & rigour to protect Bharat Mata & its integral values.”

“BJYM has received immense support & encouragement from JP Nadda Ji & Tarun Chugh Ji in all our endeavours. They have just been a phone call away & I take this opportunity to thank them on behalf of the entire cadre of BJYM.” Surya further added.

All the above three political resolutions were adopted and passed unanimously in the National Executive Committee held on October 5th, 2021 at NDMC Convention Centre, New Delhi.