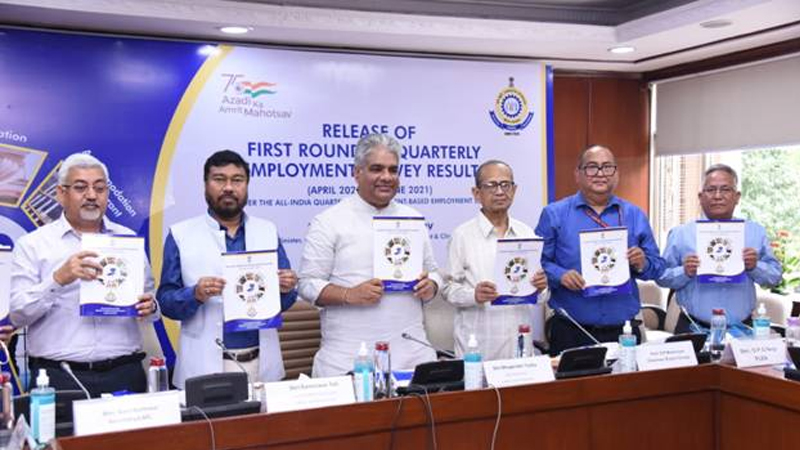 The AQEES has been taken up by the Labour Bureau to provide frequent (quarterly) updates about the employment and related variables of establishments, in both organised and unorganised segments of nine selected sectors. These sectors altogether account for a majority of the total employment in the non-farm establishments. These nine selected sectors are Manufacturing, Construction, Trade, Transport, Education, Health, Accommodation and Restaurant, IT/ BPO and Financial Services.

Announcing the results, Shri Yadav said, the estimated total employment in the nine selected sectors from the first round of QES is 3 crores and 8 lakhs approximately against a total of 2 crores and 37 lakhs in these sectors taken collectively, as reported in the sixth Economic Census (2013-14) reflecting a growth rate of 29 percent. “Of the total employment estimated in the selected nine sectors, Manufacturing accounts for nearly 41 percent followed by Education with 22 percent, and Health 8 percent. Trade as well as and IT/BPO each engaged 7 percent of the total estimated number of workers.”,further informed the Union Minister.

Shri Yadav  mentioned that data on all aspects of labour is crucial. “Evidence-based policy making and statistics based execution is the major focus of Prime Minister Shri Narendra Modi” emphasised the Labour Minister saying that such scientifically collected data with purity and integrity that can be cross examined will be immensely beneficial towards achieving targeted and last mile delivery of government programmes and schemes.

Sharing the findings on the pandemic induced employment retrenchment/ decline, the Labour Minister informed that it was found that the impact was evident in 27 percent of the establishments however the silver lining was that 81 percent of the workers received full wages during the lock-down period (March 25–June 30, 2020).

Key Highlights of the first round of Quarterly Employment Survey

There are two components under AQEES, Quarterly Employment Survey (QES) and Area Frame Establishment Survey (AFES). QES has been initiated to compile relevant data from about 12,000 establishments selected through a sampling design to represent each of the nine sectors within each state/ Union Territory, as also each size-class (range of number of workers) within each sector-State/ UT.

The results on the first round of “Quarterly Employment Survey” April- June 2021)is an very important to give insights into the concepts, definitions and sampling design adopted for estimation of sectoral employment estimates. This will serve as a useful data for policy-makers, Central/ State Governments officials, researchers and other stakeholders.