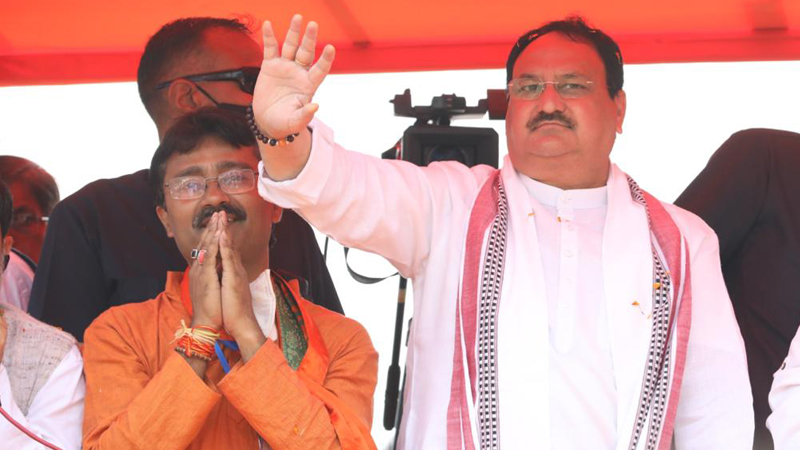 Here are the Key Points of his speech:

To grab votes Mamata Didi sometimes becomes Beti, sometimes Didi and sometimes Pishi. Mamata Didi, you may become what you want to, but under your protection the way the goons of Trinamool Congress treated an 80-year old mother Shobha Mjumdarji will never be forgotten by the people of West Bengal.

This time in the West Bengal assembly elections, our fight is to rid the state of Tolabazi, appeasement, dictatorship and corruption. Our fight is for the creation of Sonar Bangla so that every citizen in the state has the equal right and avenues to grow in any field he or she wants.

The poor of West Bengal have been denied the benefits of the Ayushman Bharat scheme, even the farmers have not been able to receive the benefits of the Pradhan Mantri Kisan Samman Nidhi because Mamata Banerjee is standing in the way blocking these from reaching the common man. This time the people of West Bengal have decided to teach the Mamata Banerjee government a lesson for the betrayal that they did with the people.

The voting in the first three phases of the elections takes it near that the ground beneath Mamata Didi’s feet is sinking. Mamata Didi will lose the election from Nandigram by a huge margin.

After our government is formed in West Bengal, we will clear the Ayushman Bharat scheme in the first cabinet meeting itself.

After the Bharatiya Janata Party (BJP) government is formed in West Bengal, we will provide a job to one member of every family in a BPO unit. The payment of Cut Money will be completely stopped. Mothers and sisters will get 33% reservation in government jobs. For girl students, education will be free from KG to PG.

First Congress, then the Communist and now the Trinamool Congress has completely destroyed West Bengal. Today West Bengal tops the charts in terms of atrocities against women in the country.

The time has come to throw out the Trinamool Congress government in West Bengal, which has become synonymous with gundaraj, corruption and politics of violence. Such kind of government should be thrown out and the Bharatiya Janata Party (BJP) should be voted to form the government to work towards a real Parivartan.