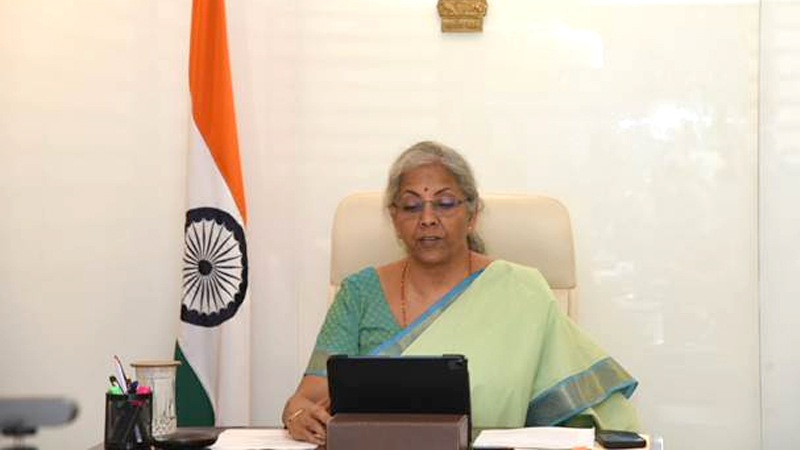 Every year at the Annual Meeting, the Board of Governors meets to take key decisions on important matters relating to AIIB, and its future vision. India is a Founding Member and the second largest shareholder in AIIB. India also has the largest project portfolio within AIIB. The theme of this year’s Annual Meeting was “Sustainable Infrastructure Toward a Connected World”.

The Finance Minister shared her thoughts in the Governor’s Roundtable Discussion on the theme “Financing Infrastructure in a Crisis-Prone World”. In her intervention, the Finance Minister appreciated AIIB for its continued commitment and dedication to assist members and for providing high-quality development finance. Smt. Sitharaman stated that, despite exogenous threats, India’s well-targeted policy mix, accompanied by major structural reforms and sound external balance sheet, have aided its growth to remain resilient. The Finance Minister emphasized that India has embarked on the path of a self-reliant economy and therefore has been successful in mitigating the negative effects of the pandemic. Smt. Sitharaman underscored the remarkable progress India has made through its Digitalization Mission, utilizing technology to facilitate social protection and boost financial inclusion. The Finance Minister also highlighted that Prime Minister Shri Narendra Modi is actively leading India’s climate change response efforts through various programs such as ‘Lifestyle for Environment’ (or LiFE), among many others.

The Finance Minister suggested that in order to ensure meaningful impact is achieved and resources are not scattered in multiple areas, AIIB needs to scale-up investments in key priority areas including clean energy and energy efficiency, disaster resilient infrastructure, social infrastructure with a special focus on education and health, and digital infrastructure.

As public resources alone are insufficient to meet vast infrastructure needs of members, the Finance Minister advised that the Bank should not only play a catalytic role in mobilizing diverse private sector resources but also explore mechanisms to augment its own resources, including through early action on the recommendations of G20’s Expert Panel’s Report on the MDB’s Capital Adequacy Framework (CAF).

Moreover, the Finance Minister pointed out that beyond its financial support, AIIB should work towards expanding the scope of its mid-stream and upstream engagement activities such as increased technical assistance to help clients translate strategies into investment plans. Finally, Smt. Sitharaman suggested that the Bank should set-up full-fledged country offices in member locations.

In conclusion, the Finance Minister assured AIIB of India’s continued collaboration in achieving its mandated mission.