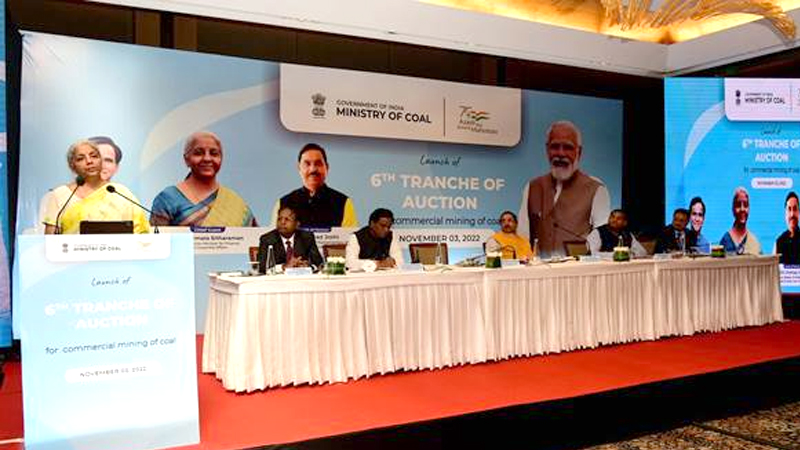 Union Finance Minister Smt. Nirmala Sitharaman said that a fast growing economy like India needs greater investment in coal production and gasification projects. Globally, energy prices especially that of gas is going up. Launching the 6th round of coal mine auction of the Ministry of Coal here today, the Finance Minister highlighted that India is at present the best investment destination in the world. The Minister pointed out that due to policy consistency and transparent process of the present Government, coal imports for power sector has come down by 41%. The finance minister said that twelve states are to benefit directly from today’s auctioning of 141 coal mines. Complementing the Coal Ministry for the recent initiatives to unlock the coal sector, Smt. Sitharaman said that mining sector reforms are providing the right fillip to our fast growing economy. Finance Ministry will be extending all help for coal gasification and incentives in commercial mining, she further added.

Addressing the function Coal, Mines & Parliamentary Affairs minister Shri Pralhad Joshi said that Coal Ministry is exploring alternative methodology for enhanced use of coal.  Shri Joshi said that finance ministry has extended Rs. 6000 crore incentive for coal gasification and Rs. 250 crore for exploration process.   During the biggest auction undertaken so far, today 141 mines pertaining to eleven states have been auctioned. Shri Joshi said that previously auctioned mines have started production and hoped that 10 to 15 million ton coal will be produced from new mines by next year.  As per the review done the other day,   the Ministry of Coal is anticipating 900  million ton  coal production this year, Shri Joshi said. 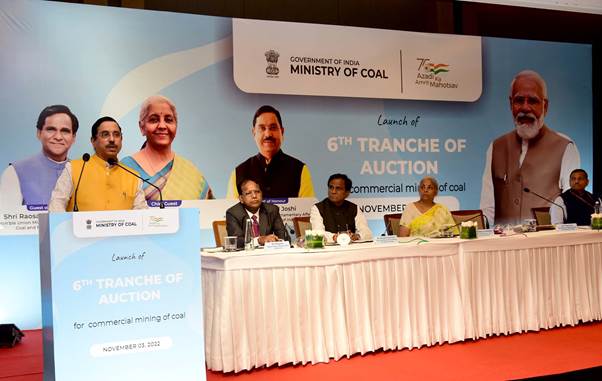 Mines falling under protected areas, wildlife sanctuaries, critical habitats, having forest cover greater than 40%, heavily built-up area etc. have been excluded. The block boundaries of some of the coal mines where there was presence of dense habitation, high green cover or critical infrastructure etc. have been modified based on comments received during stakeholder consultations to enhance bidders’ interest and participation in these coal blocks.  The mines being auctioned are spread across coal/ lignite bearing states of Jharkhand, Chhattisgarh, Odisha, Madhya Pradesh, Maharashtra, West Bengal, Andhra Pradesh, Telangana, Rajasthan, Tamil Nadu and Bihar.

Key features of the auction process include reduction in upfront amount and bid security amount, permission to relinquish part of the coal mine in case of partially explored coal mines, introduction of National Coal Index and National Lignite Index, ease of participation with no entry barriers, full flexibility in coal utilisation, optimized payment structures, incentives for early production, coal gasification and usage of clean coal technologies.

The commencement of sale of tender document shall start from November 03, 2022. Details of the mines, auction terms, timelines etc. can be accessed on MSTC auction platform. The auction shall be held online through a transparent two stage process, on the basis of Percentage Revenue Share.SBI Capital Markets Limited, the sole Transaction Advisor to Ministry of Coal for the commercial coal mine auctions, had devised the methodology and is assisting the Ministry of Coal in conducting the auction process.