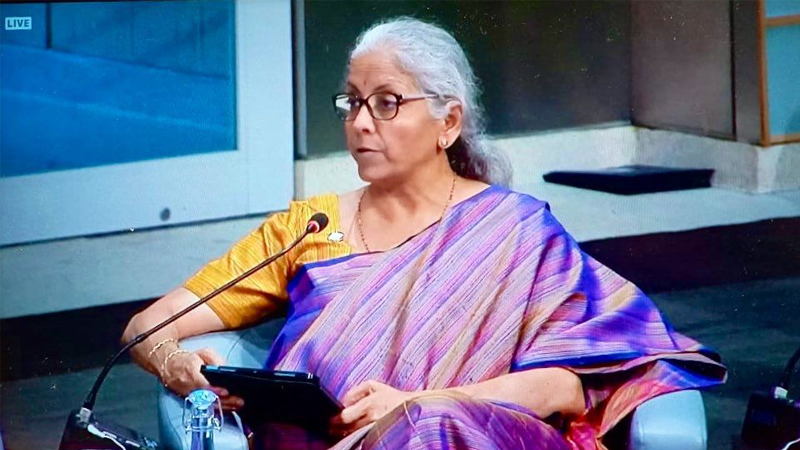 The Development Committee had specifically met to discuss two critical aspects that the world is facing:

In her opening remarks, the Finance Minister stated that this is an excellent opportunity to put our heads together and think about how best we can negotiate the multiple challenges and bring back long-term growth. Despite this year’s projected growth rate of 7 percent for the Indian economy, we remain concerned about the global economic outlook and geopolitical environment, She added.

Smt. Sitharaman stated that the Food and Energy Crisis paper rightly identifies energy efficiency as the “first fuel of choice”. Similarly, reducing crop loss and food waste should also be the “first intervention of choice” to ensure food security.

The Finance Minister urged the World Bank to avoid a unidimensional view of subsidies and to differentiate between distortive subsidies and targeted support to the vulnerable households.

Giving India’s example as an illustration, Smt. Sitharaman said that by providing free LPG connections under the Pradhan Mantri Ujjwala Yojna over the last six vears. India has ensured that access to Clean cooking methods has achieved near saturation for women in India. This has made a definitive  contribution in  improving  India’s performance  on SDGS 3, 5 and 7.

While the quest for energy and food security necessitates non exclusion of fossil fuels from our energy mix, the Finance Minister noted that India has set up its first pure hydrogen producing plant as well as its first 2G bioethanol refinery this year.

Going forward, Smt. Sitharman said that there are 3 clear opportunities for the World Bank Group:

On financing  climate and  development  goals, the Finance Minister said that the WBG is uniquely placed to bring together all stakeholders for developing an investment strategy for climate and development finance. Yet, thw world must never lose focus on the internationally agreed basic principle of common but differentiated responsibilities. This necessitates avoidance of a one-size fit-all approach.

Smt. Sitharaman stated that mitigation of risks is essential for crowding in private capital. While welcoming the launching of SCALE, the Finance Minister encouraged the World Bank to increase the share of grants from the current 5 % level and to work below the country level to support projects with huge climate impact beyond the national borders.

Smt. Sitharaman exhorted for prioritising consultations with key stakeholders throughout the formulation of CCDRS and following the “One Bank” approach are critical to their success.

While urging the World Bank to take the lead and also help build consensus across MDBS, the Finance Minister pushed for the recommendations of the Independent Review of the MDB Capital Adequacy Frameworks commissioned by the G20 hold the key for sustained financing.

About the WB-IMF Annual Meetings

The joint WB-IMF Development Committee meets every fall at the time of the Annual Meetings of the Boards of the Governors of the World Bank and the IMF, and every spring at the Spring Meetings, to discuss the progress of the work of the Bank and the Fund. Following the Annual Meetings tradition, the Development Committee meets in Washington two years out of three and, in order to reflect the international character of the two institutions, every third year in a different member country.