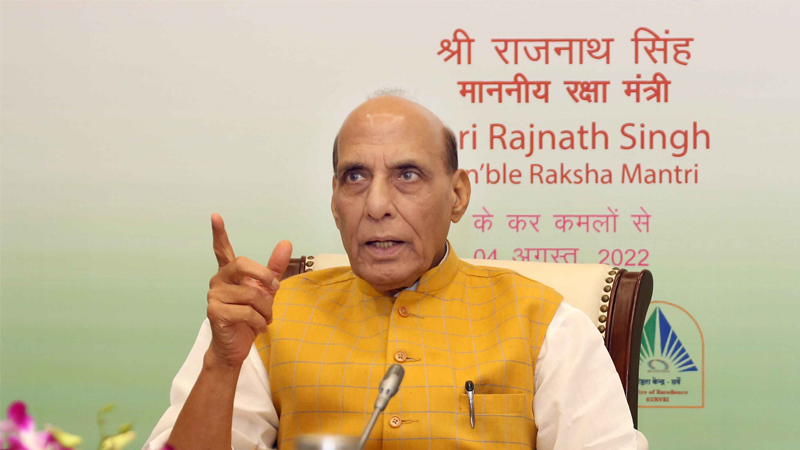 Raksha Mantri Shri Rajnath Singh has called upon Central and State Government Departments to ensure foolproof management of land for India to become a global manufacturing hub. He was addressing the inaugural session of a webinar organised on August 04, 2022 to disseminate Geographic Information System (GIS)-based applications, developed by Centre of Excellence for Satellite & Unmanned Remote Vehicle Initiative (CoE–SURVEI), across the Central & State Government departments, Municipal Bodies and Development Authorities for wider use and adaptability.

The CoE-SURVEI was set up by Directorate General Defence Estates (DGDE), Ministry of Defence to promote the use of emerging technologies in land surveys, analysis of data & land management. In the last few months, the Centre has developed a number of softwares in collaboration with Bhabha Atomic Research Centre, Visakhapatnam; Bhaskaracharya National Institute for Space Applications and Geo-informatics, Gandhinagar; National Remote Sensing Centre; IIT Delhi and other Central Government organisations for effective land management.

“Collaborating with the private sector, the CoE-SURVEI is moving fast towards becoming a one-stop centre to meet the land survey, analysis and management related needs of our country,” the Raksha Mantri said. The applications developed by CoE-SURVEI include those on Change Detection, Land Use Analysis and 3D Imagery Analysis.

The Land Use Analysis software, developed with active participation of Nascent Infotechnologies Pvt Ltd, can analyse any place located in any part of the country through GIS and Remote Sensing (RS) technologies. The Raksha Mantri stated that the tool will prove to be helpful not only for Ministry of Defence, but other Government and State departments as well, ensuring optimum utilisation of existing land. He also appreciated the efforts of CoE-SURVEI for developing tools for 3D imagery analysis and visualisation of hilly areas.

Pointing out that the world population is increasing and so is the demand for resources, the Raksha Mantri stressed on the need for effective and judicious management of inimitable resources such as land for its optimum utilisation. He urged all stakeholders to encourage use of technology in survey & analysis of land and contribute to Nation Building.

In his address, Shri Rajnath Singh also listed out a number of steps taken by the Government, under the leadership of Prime Minister Shri Narendra Modi, to resolve various issues such as land disputes. “Issues like land disputes become a barrier in the development process. Our Government has repealed many irrelevant archaic laws related to land. Today, India is one of those countries where, even in villages, land records are being maintained with the help of drones. According to the Digital India Land Records Modernisation Programme (DILRMP-MIS 2.0), land records of about 94% villages have been computerised. With this, people are able to get a clear title of their land,” he said.

Underscoring the importance of clear land titles, the Raksha Mantri described them as not only important for the convenience of residents, but also to facilitate the industries in establishing new set-ups. Clear land titles are an important requirement if India wishes to become a manufacturing hub, attract businesses and investment or be among the world’s leading countries in similar fields, he said.

Shri Rajnath Singh commended other such efforts of DGDE for the development of Cantonment Boards and increasing the ease of living of its residents. These include the survey of about 18 lakh acres of defence land using modern technologies and launch of ‘e-chhawani’ portal, besides the setting up of CoE-SURVEI. He exhorted DGDE to come out with more such reforms, with the support of Ministry of Defence. He hoped that the increased use of technology will bring more efficiency, transparency and accountability in the functioning of DGDE.

The day-long webinar has been organised by DGDE with other Central and State Government Departments with the aim to disseminate latest technologies to achieve the twin objectives of adopting such tools in the day-to-day functions and obtain expert views for their further adaptability and upgradation.

Defence Secretary Dr Ajay Kumar, Director General Defence Estates Shri Ajay Kumar Sharma, other senior officers of Ministry of Defence; officials of various Central & State Government Departments and field officers and DEOs from Cantonment Boards were present on the occasion. During the webinar, expert agencies/departments will make presentations on GIS & RS tools which are either under development or are already under use by various departments.