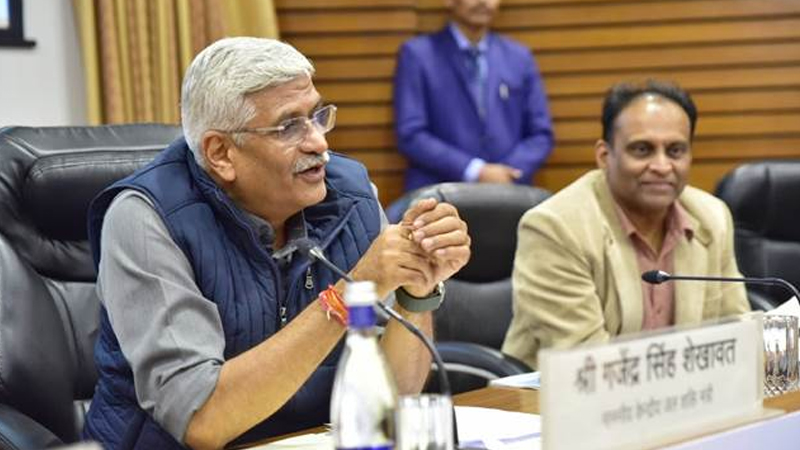 The Union Minister for Jal Shakti, Shri Gajendra Singh Shekhawat presided over a workshop of the Ganga Vichar Manch (GVM), which is a platform for interactive dialogue among various stakeholders of River Ganga. Citing the recognition given by the United Nations Environment Programme (UNEP) to Namami Gange as one of the world’s top 10 flagship programmes to revive the natural world, Shri Shekhawat said “this Award is dedicated to all who have been contributing to the cause of Ganga Rejuvenation in their own ways and working at the ground level in a targeted manner. It is because of the people-river connect that Namami Gange has become a global programme like no other.”

Congratulating the GVM volunteers for their work on the ground, Shri Gajendra Singh Shekhawat said “we are all part of the Ganga Parivar and now, together, we must strive to go to the next level and not become self-complacent with the success that we have achieved in the rejuvenation of Ganga so far.” The Union Minister urged the GVM members to think of ways to increase productivity and set even higher targets for the future. Shri Shekhawat encouraged GVM volunteers to assist the government by informing about any untreated waste flowing into the river.

Welcoming the guests, Director General, National Mission for Clean Ganga (NMCG), Shri G. Asok Kumar said the recognition of Namami Gange as one the top 10 flagship programmes in the world is a major achievement and GVM played a big role in making this happen. Shri Kumar said “The recognition was given only after running ground checks and measuring the positive impact of Namami Gange manifesting in improved water quality and increased sightings of aquatic species, especially Ganga Dolphins. It is because of volunteer platforms like GVM that Namami Gange has become a people’s movement and I thank all the members for this achievement.”

The DG, NMCG also talked about the Arth Ganga concept under which several novel initiatives are being taken including ‘Ghat Mein Haat’, trainings for ritualistically performing Ganga Artis, workshops for farmers on adopting Natural Farming in the Ganga Basin etc. Tourism along Ganga is also being promoted under the aegis of Ministry of Tourism and events are being planned at 75 locations on Ganga and its tributaries to dedicate to the Azadi ka Amrit Mahotsav. Shri Kumar also mentioned about the regular meetings of District Ganga Committees since April 2022 which is playing a positive role in implementation of various activities and projects at the district and local level.

An interactive session was also held during the workshop wherein GVM volunteers interacted with the Union Minister for Jal Shakti, Shri Gajendra Singh Shekhawat through which several suggestions emerged. The GVM platform offers a unique opportunity to people from all walks of life to suggest tangible solutions, debate, participate as a volunteer in the conservation of River Ganga. During the workshop, a presentation on ‘Natural Farming’ was given by Shri Gagnesh Sharma, Director, National Center for Organic and Natural Farming. Along with DG, NMCG, Shri G. Asok Kumar, National Convener, GVM, Shri Bharat Pathak, ED (Technical), Shri D.P. Mathuria were also present at the workshop.