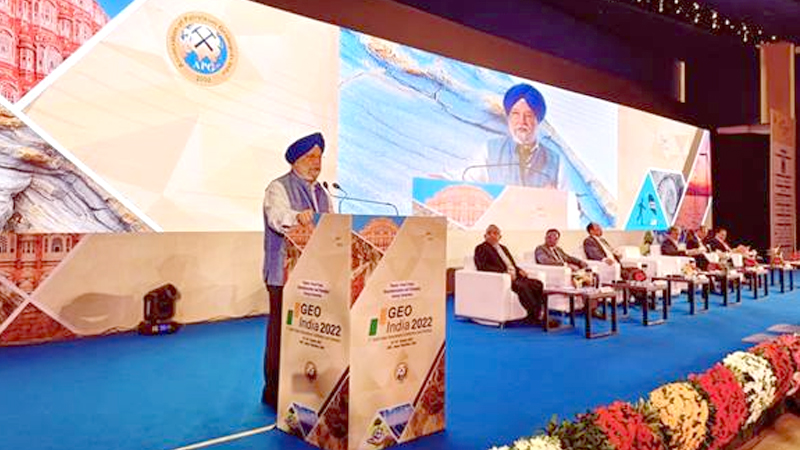 Government of India has navigated the global energy challenges very well, insulating the developing economy from the rising global crude and gas prices. At present, five million barrels of petroleum is being consumed in our country every day and it is also increasing by three percent, which is higher than global average of around one per cent. Union Petroleum and Urban Affairs Minister Hardeep S. Puri shared this with the media at the three-day South Asian Geoscience Conference Geo India 2022, which began at JECC, Sitapura here on Friday.

In the inaugural session, the Minister said that the ethanol-blend percentage in petrol has increased from 0.67 per cent in 2013 to 10 per cent in May 2022, i.e., 5 months ahead of schedule. It is reducing 2.7 million tonnes of CO2 emissions which is good for the environment. As per the International Energy Agency (IEA) estimates, India will contribute a quarter (25%) of the growth in global energy consumption in the coming two decades. BP estimates that India’s energy demand will double, while natural gas demand is expected to grow five-fold by 2050.

Petroleum Secretary Pankaj Jain said the geology experts should utilise this opportunity to elevate their contribution in the context of increasing demand and scarcity of energy sources. He asked geoscientific fraternity to develop tailored knowledge for deep water, ultra-deep water and onshore to enhance oil and gas production while doing it in environmental sustainable manner.

Earlier, welcoming the dignitaries and  participants, Rajesh Kumar Srivastava, CMD, Oil and Natural Gas Corporation Limited (ONGC) and Chief Patron of APG, said, “Geo India has been a major leader in the last 14 years under the aegis of Association of Petroleum Geologists (APG) India. The biennial South Asian Geology Conference and Exhibition has evolved in terms of size and international participation. The global market value of automation technology in the oil and gas sector is projected to nearly double and reach approximately $42 billion by 2030. It is high time that the oil and gas sector take advantage of the digital transformation.

The Minister also inaugurated the Exhibition of Geo India 2022, where a number of Indian and global petroleum companies and service providers are showcasing their cutting edge services and tools for Exploration and production of oil and gas.