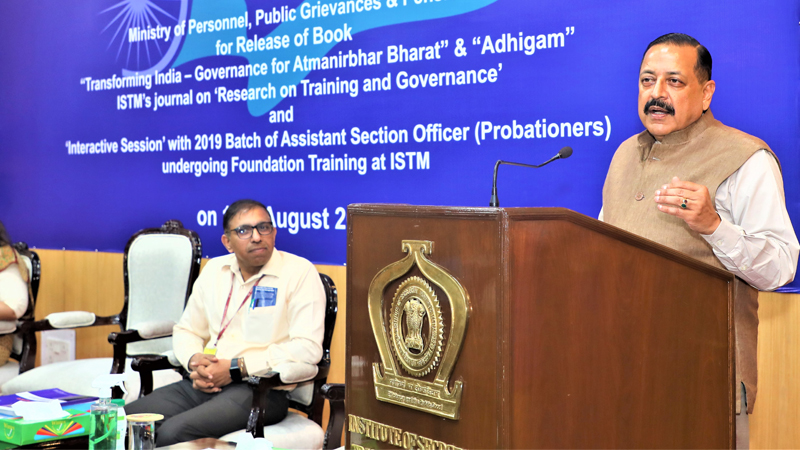 Addressing the Assistant Section Officers (Probationers) of 2019 Batch at ISTM here, Dr Jitendra Singh said, welfare of every citizen is at the heart of national planning and programmes in Prime Minister Narendra Modi’s vision for building a New India. He said, citizen welfare is not only the prime constitutional mandate for the government, but it is also important for ensuring a participative form of the Government.

Dwelling on the training aspects of civil servants, Dr Jitendra Singh underlined that Government of India attaches high priority to training needs of every official and it is now implementing the National Programme for Civil Services Capacity Building or Mission Karmayogi aimed at creating an opportunity of world class capacity building to all Government officials based on the key principle of “role-based” learning” than the earlier practice of training in Rule based programs.  He also expressed satisfaction that that the ASO Foundation Training Programme is one of the first to have been redesigned incorporating important principles of Mission Karmayogi.

This is the second batch to undergo the revamped “role based” and “competency-based” training, where there will be a mix of online, on the job and class room training as well. The Ministries and Departments where they will be posted now will also be planning for their capacity building in the domain specific competencies, so that they can deliver the best in their allocated job.

Dr Jitendra Singh told the officers that after qualifying the difficult exam, they are part of the government machinery, and the entire nation looks towards them for playing their role efficiently, smartly and effectively. He said, it is time for them to work towards fulfilling the expectations of a citizen in a diligent and result-oriented manner by cutting down delays, ensuring timely disposal of business and strengthening the system of monitoring of outputs and outcomes. The Minister said, the ASOs have the advantage of bringing in the fresh perspective and views on existing problems and they can use new thinking and ingenuity in their work processes, wherever posted.

Dr Jitendra Singh felt happy for being informed that more than half of this batch are Science Graduates and added that this will help in adapting to the changing roles of CSS – being tech savvy for citizen centric feedback, real time monitoring of schemes/programmes etc. He also pointed out that Prime Minister Modi’s many new schemes have strong scientific basis and orientation, be it Gatishakti, Digital India, Start-up India, Jan Dhan-Aadhar-Mobile trinity, Direct Benefit Transfer and dashboards and platforms for monitoring of all major programmes. He said, the background of probationers and skill set will greatly help them to quickly understand the job requirements and help in making important contribution.

Dr Jitendra Singh reminded the probationers that Prime Minister always emphasised to treat “Government Service as your “Seva” and not “Naukri”.  Referring to his personal experience, the Minister told them that no other job will provide them an opportunity to work in several Ministries and Departments and connect with so many colleagues in other organisations and to directly serve the society than the one they are now part of.

Dr Jitendra Singh said, Central Secretariat, as the entire universe of Central Ministries and Departments is commonly referred to, is the nerve centre of functioning of the Government of India as the Secretariat is essentially meant for policy formulation, implementation, coordination with State Governments and field agencies and monitoring organisation of the government. He said, the Secretariat’s primary responsibility is to assist and advise the political executive in policy formulation, implementation, review and modification of such policies from time to time. Besides, the Secretariat also looks after several other important functions such as drafting legislations, rules and regulations, Sectoral planning and programme formulation, and exercises budgetary control, the Minister added.

Referring to Prime Minister’s speech, Dr Jitendra Singh said, “In this period of “Amrit Kaal”, we have to take Reform, Perform, Transform to the next level. That is why today’s India is moving ahead with the spirit of Sabka Prayas”. He also recalled Mahatma Gandhi’s mantra that every decision should be evaluated on the touchstone of the welfare of the last person in the last line. The Minister reminded the officers that they have a long way to go and serve the Secretariat for the next 30-35 years or so and they will be part of the great process of social and economic transformation being carried forward in terms of the vision of the Prime Minister to take the country to the Golden era in its 100th year of Independence in 2047.

Dr Jitendra Singh congratulated the officers for joining the central secretariat service, which serves as an institutional memory and provides continuity in Administration. He also wished success to the training division of DOPT and ISTM in their efforts to fulfil the vision of the Prime Minister in this massive and historic effort of Capacity Building for all categories of Civil Servants.