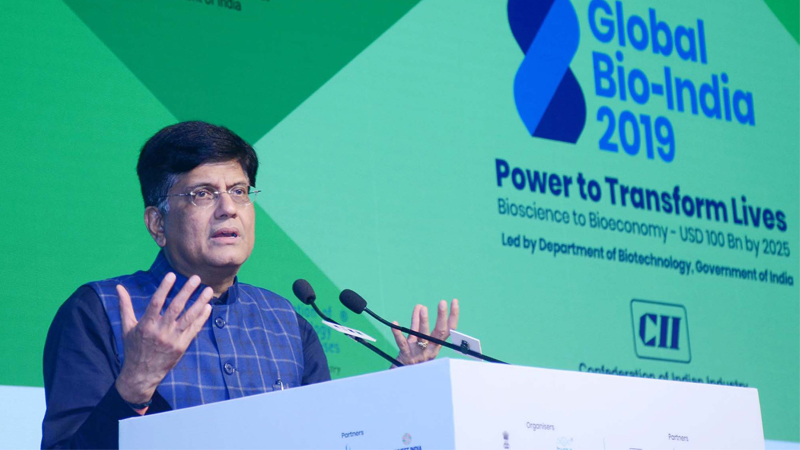 The Union  Minister of Railways and Minister of Commerce & Industry, Shri Piyis Goyal has said the Government has simplified the Patents regime for Start-ups, MSMEs among others to encourage innovation. He assured the Department of Industrial will extend all support to new and emerging enterprises in Biotechnology sector. Shri Goyal was addressing the gathering after giving away Awards at the Global Bio-India Summit, 2019 here today.

Shri Goyal said biotechnology is a key sector to fulfill India’s aspirations. “The Prime Minister’s Vision of New India is intertwined to DBT’s enterprising endeavours”, he said. “The aspirations of 1.3 billion Indians rests on our success to adopt technology, – innovations that lead to transformations”, he added.

Shri Goyal said India was the first country in thw world to have a separate Department of Bio-Technology. “Outside the US, the largest number of FDA approved drugs, 523 in numbers, come from India”, he said. “From the present nearly Rupees 3.5 lakh crore worth of BT industry in India, the DBT aims to top Rs.7 lakh crore output by 2025 and analysts say this could even touch Rs.11/12 lakh crores”, he added.

Calling upon academia, industry and government to come together, Shri Goyal said sustainability will be the fulcrum for innovation.