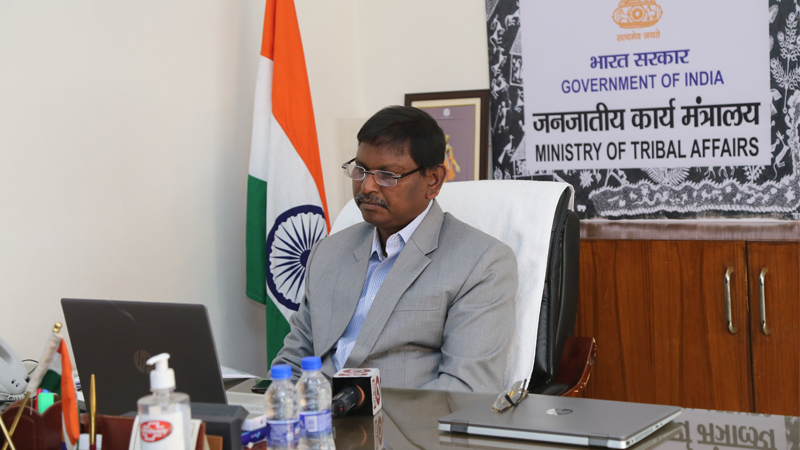 The Union Minister of Tribal Affairs, Shri Arjun Munda, interacted with the students of seven Eklavya Model Residential Schools situated in the various districts of Jharkhand via video conferencing mode on 22nd February, 2022.

During the lively interaction, the Minister stated that the Government has taken up the challenge of education of tribal population in mission mode and we are working to catapult them to international levels. To this effect, the government has sanctioned new 452 Eklavya Model Residential Schools to fill the gap in the education of tribal children and a large number of these schools are proposed to be opened in remote areas and at block level. These schools will provide quality education for all round development of the tribal students, the Minister added. He further stated that the Prime Minister laid foundation stone of 50 EMRSs on Janjatiya Gaurav Divas i.e 15th November, 2021, out of which 20 are located in Jharkhand. Giving more details, Sh Arjun Munda said that during last few years’ efforts have been made to step up the quality of education in these schools as a result of which we now see many toppers and winners emerging from EMRSs in different fields like academics, sports, cultural activities among others. The students are also being involved in social and nation building activities like Poshan Abhiyaan, Swachchta Mission among others. Moral values and character building should be the focus of education , the Minister said.  The Minister said that a large number of scholarships are available to tribal children for taking up higher studies like post-matric scholarship, scholarship for higher education, national fellowship, scholarship for overseas education, and the endeavor is to give out as many scholarships to the ST students as possible.

Encouraging the indomitable spirit of the persevering students, Shri Arjun Munda also expressed his delight while addressing the students.

The event commenced with the EMRS Kujra (Lohardaga Dist.) students’ melodious rendition of the Saraswati Vandana. Thereafter, the head of each of the seven schools presented a synopsis of the performance of their school and the recent laurels achieved.

Eklavya Model Residential Schools (EMRS) are a Government of India scheme to establish model residential schools for Tribal students (Scheduled Tribes) across the country. It is a flagship intervention of the Ministry of Tribal Affairs to ensure first-class education and all-around development of tribal students in remote tribal regions. The Union Budget for 2018-19 introduced that each block with more than 50% ST population and at least 20,000 tribal people shall have the provisions of Eklavya Model Residential Schools.

Eklavya Model Residential Schools are being developed to impart to tribal students, with an emphasis on academic training. The schools cater to Tribal students from classes VI to XII, having an average strength of 480 students. At present, there are 367 functional EMRSsin the country. Set up at par with NavodayaVidyalayas, they also provide training in sports and ability development. Also, EMRSs are prepared with facilities catering to the students’ on-campus needs for holistic improvement and offer free education inclusive of boarding and lodging free of cost.