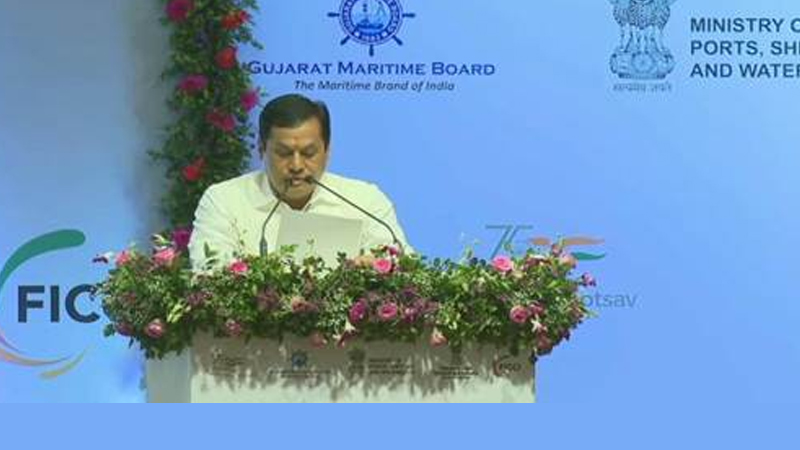 Union Minister of Ports, Shipping and Waterways Shri Sarbananda Sonowal has said that Gujarat is the business gateway of India and one of the world’s preferred maritime destinations. Addressing International Conference on Green Ship Recycling and Vehicle Scrapping in Gandhinagar today he said with a coastline of 1,600 km, Gujarat handles over 40% of India’s cargo throughput and contributes 18% of the total cargo transported using coastal shipping. He said Gujarat was the first state in the country to privatise the port sector, and by virtue of its strategic location, proactive policies, and robust infrastructure has emerged as the flag bearer of India’s maritime success story. Shri Sonowal said India is a leading destination for ship recycling and the planned doubling of capacity of Alang-Sosiya shipyard in Gujarat will create a large number of employment opportunities and bring in more economic prosperity to Gujarat and the country.

Speaking on the occasion Chief Minister Shri Bhupendra bhai Patel said under the leadership of Prime Minister Narendra Modi, Gujarat is now moving towards port-led development. Gujarat is India’s coastal gateway. He said the state is home to Alang, the largest ship-breaking yard in the world. Just as Gujarat has been dominant in ship breaking-recycling sector, it will also be in green recycling. He said Gujarat has the potential and the political will to become a hub for green ship recycling. The Gujarat government is committed to making Gujarat a global centre for green recycling. He said Alang also has a well-developed ecosystem and capacity for vehicle scrapping and will contribute majorly to the vehicle scrapping policy.

The International Conference on Green Ship Recycling and Vehicle Scrapping is showcasing the current status of ship recycling industry in Gujarat and the adoption of HKC Convention compliances. The conference is also facilitating discussion on how the EU shipping industry can take advantage of ship recycling facilities in Gujarat, and explore partnerships with EU member countries. Two sessions were also organised as a part of the conference. The first session on “Ship Recycling Industry in India and Compliances” focused on the Ship Recycling Act, the role of GMB, compliance with HKC and EU Ship Recycling Regulation (EUSRR), and safe and sustainable recycling.

The second session was on Vehicle Scrap Policy and saw an overview of the policy. It also showcased Alang’s capabilities as a hub of vehicle scrapping.

Shri  Sonowal also visited the site of proposed National Maritime Heritage Complex near Lothal and reviewed the progress of the project in presence of senior officers of Government of Gujarat and Ministry of Ports, Shipping and Waterways. The project is being developed by the Government of India through MoPSW for an estimated amount of Rs.3500 crore. The proposed Complex would showcase India’s rich and diverse maritime heritage and will be the first of its kind in the country and one of the world’s largest maritime museums dedicated to the legacy of maritime heritage of India.

Life size architecture of the Lothal will be depicted in the museum. The various components like, lower town, middle town, Citadel, cemetery, houses, pattern of the street, sanitation system, wells, industries/workshop and marketplace, etc. will be depicted in the museum. To provide First-Hand Experience to visitors, a working model of the Lothal dockyard, functioning of the warehouse etc. will also be showcased along with typical Harappan house with components like, oven, etc. The museum will portray renowned Harappan Water Harvesting and Management system excavated at the site of Dholavira.

Renowned architecture firm Ms. Architect Hafeez Contractor has been appointed as the Project Management Consultant of the project and have already prepared Concept Design & Plan for following 5 Galleries of phase 1A:

a) Gallery- 1 Orientation and oceanic mythology

b) Gallery-2 Harappans: The Pioneer Seafarers

The work on concept design of Gallery 6 (Emergence of Indian Navy) is in progress by Ms. Architect Hafeez Contractor in consultation with the officials of Indian Navy and consolidated list of artefacts for the galleries has been finalized.

The EPC work of the NMHC phase 1A has been awarded to Tata Projects Ltd. in Mar 2022 and is targeted to be completed by Mar 2024.

The project will boost the tourism in the state of Gujarat in turn developing the economy of the region including the nearby villages namely Saragwala and Utelia. The proposed six galleries planned in the NMHC project will focus on different time periods of the Maritime history to the visitors.

Speaking after the visit Shri Sonowal stated that the project will be developed as a new international destination for tourist and to stand at par with other renowned international museums of the world under the Sagarmala program of the Ministry of Shipping. He said It will also create an opportunity of employment for the local people and help them develop a number of cottage industries thus materializing the vison of Atmanirbhar Bharat of Prime Minister Shri Narendra Modi.